While the word “transdisciplinary” may not be familiar to many outside of academia, the concept has taken root in universities across the U.S. as a way to bring multiple stakeholders and areas of expertise together to address global challenges in areas such as health care, food systems, energy and the environment.

Referenced in the 2013 Arise 2 report, produced by the American Academy of Arts and Sciences, transdisciplinary research provides a strategy for advancing scientific discovery in an environment of uncertain government funding, increasing competition among researchers for limited dollars and the emergence of “wicked problems” occurring on a world-wide scale. Transdisciplinary goes beyond collaborative, multidisciplinary and interdisciplinary in that it aims to leverage existing concepts and approaches from multiple disciplines to create new disciplines and new solutions for a rapidly changing world.

The University of Minnesota has also embraced the model and has identified advancing transdisciplinary partnerships as one of the four primary thematic areas, or cornerstones, of Five Years Forward, the U’s strategic plan for research. While the final recommendations for the plan are still being developed, transdisciplinary partnerships and approaches are already in evidence across the university system.

One way to promote transdisciplinary partnerships is through the creation of centers and institutes that bring together diverse disciplines and areas of expertise to address critical questions and solve complex issues across a broad spectrum of topics. U-based groups such as the Institute on the Environment, the Center for Transportation Studies and the Minnesota Population Center bring together public officials, researchers, government agencies, private industry and community members to identify new approaches and influence policy on a local, national and global scale. The university is home to nearly 300 centers, institutes and interdisciplinary graduate programs.

Another way the U has been building up its capacity to conduct cutting-edge research is by recruiting top researchers from around the world through cluster hires, especially in rapidly evolving multidisciplinary science and technology fields, such as computational and genome-enabled biology. Targeting faculty in specialized disciplines builds upon the university’s existing strengths and expertise to open up new opportunities for research and applied science.

Referring to this dynamic, multi-faceted partnership as a “Triple Helix” Brian Herman, Ph.D., the university’s vice president for research said in his 2013 State of Research report, “The goal of this intricate and interconnected partnership is to create an innovation ecosystem that thrives on the combination of knowledge creation capabilities, such as those located at the university, with the needs of our for-profit and non-profit partners, along with the policies, investments and oversight of the government to support the ecosystem.” 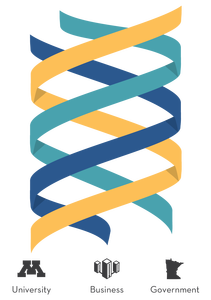 MnDRIVE (Minnesota’s Discovery, Research and Innovation Economy) is Minnesota’s version of the Triple Helix. MnDRIVE, a landmark partnership between the state and the university, is a $36M biennial investment designed to align areas of university strength with the state’s key and emerging industries to produce breakthrough research that addresses our state and society’s greatest challenges. To further encourage collaboration among MnDRIVE project partners, the Office of the Vice President for Research awarded $6M to support 12 transdisciplinary research projects.

A special charter, adopted by participants of a World Congress of Transdisciplinarity in 1994, states that “the transdisciplinary attitude involves an acceptance of the unknown, the unexpected and the unforeseeable.” As these burgeoning relationships continue to develop and these initiatives begin to demonstrate results, the university, along with its stakeholders and partners, will wait to see what the future has in store.

Erin is assistant communications director for the Office of the Vice President for Research.