When Bailey Kemp presented her research last week, it wasn’t to her peers at the University of Minnesota Morris, but to attendees at the 70th Annual Irish History Students’ Association conference at the University College Dublin in Ireland.

Kemp, who recently graduated from UMN Morris with a double major in biology and English, is one of five students presenting their work on biofiction at conferences following their original research into the subject during fall semester. The students conducted the work with guidance from Michael Lackey, PhD, Distinguished McKnight University Professor, while part of Lackey’s Social Justice Biofiction course.

Biofiction is literature with a protagonist named after a real-life person, and the author fictionalizes that historical figure in order to show a common theme between otherwise unlike things or to convey a larger meaning, such as for social commentary. Lackey, an expert in biofiction who’s spending the current semester as a visiting scholar at Georgia College, points to David Ebershoff’s 2000 novel The Danish Girl as an example.

The book is about the life of Lili Elbe, a Danish transgender woman who was among the first people to undergo sex reassignment surgery. Ebershoff latches onto the concept of a person transforming from a man into a woman and uses it as a broader theme for greater change. His story fictionalizes Elbe’s actual wife, a Danish woman, to instead be a wealthy American who moves to Denmark, falls in love with it, and becomes a Danish woman. His story shows two characters undergo different but thematically similar transformations, and either one could be the titular “Danish girl.”

“That has huge metaphorical possibilities, because a lot of people are born into identities they’re not comfortable with,” Lackey said. “Ebershoff took that essential component of a story from the past and he converted it into metaphor so we, as readers, could learn how we also can create a whole new identity.”

The Confessions of Nat Turner by William Styron provides another well-known example, Lackey said. In it, Styron shows the similarities between the societal structures and conditions used to oppress African Americans in 1831—the year Nat Turner led a four-day rebellion of both enslaved and free African Americans in Virginia—and those used to oppress gay people in 1967, when Styron wrote the book.

It was while considering how to move forward with a biography he was working on that Lackey found himself first wondering about the biographical novel. He dug into the subject to find out more about how common biofiction was. Before long, he was helping host a forum to discuss the literary form at UMN’s Institute for Advanced Study on the Twin Cities campus. Event planners were surprised to see a packed room.

“That was when we started to realize, ‘Oh my gosh, there’s a hunger and an interest in this literary form,’” said Lackey. “From that point forward, everything took off.”

After the event, Lackey started to conduct interviews with biographical novelists, providing a way for these writers—many of them accomplished award-winners—to explain what their works are doing. Biofiction has since begun to gain a greater sense of legitimacy among critics and interest has spread rapidly.

When it comes to the students in his classes at Morris, Lackey said they don’t often start the course excited about the subject. That soon changes. 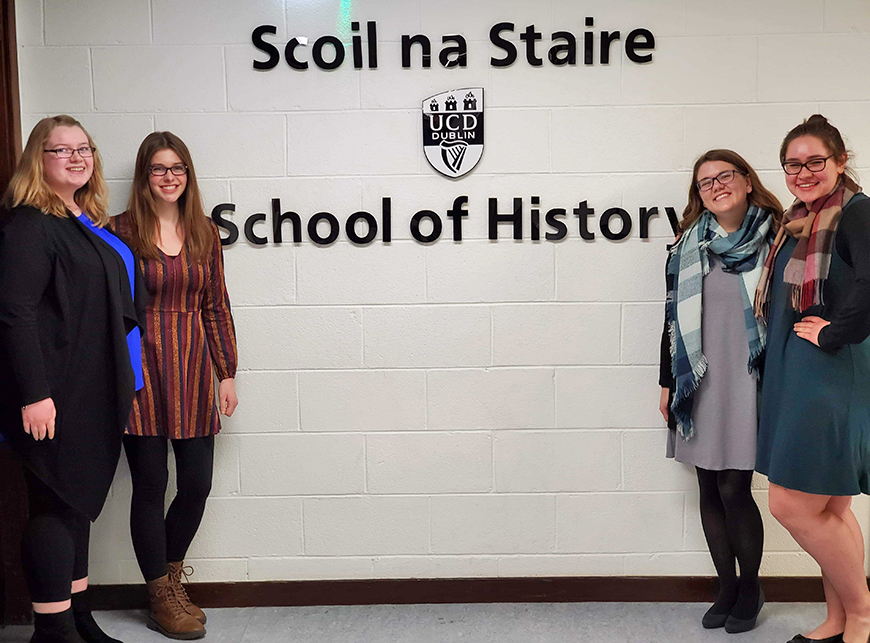 When Lackey noticed he had relatively few students in his fall 2019 Social Justice Biofiction class, he saw an opportunity to teach them a bit differently, creating a collaborative atmosphere that focused on researching, writing abstracts, and presenting findings—a format that would also provide good preparation for their senior seminar, a presentation-based part of many UMN Morris students’ paths to graduation.

When he came upon the Irish History Student Association conference’s call for papers in October and shared them with the students, they responded enthusiastically. He encouraged them to find research ideas they could be passionate about pursuing.

“The best work you’re going to do is when it comes from within you, and not when a teacher demands it,” he said. “You have to love the idea, you have to be passionate about the idea, and the idea has to come from you.”

Kemp, who first became interested in biofiction when she had an opportunity at UMN Morris to interview Ebershoff about The Danish Girl, based her research on Irish writer Colum McCann’s novel TransAtlantic, a story that weaves together several historical figures. Kemp focused on McCann’s inclusion of Frederick Douglass, who journeyed to Ireland in 1845 to begin his international campaign against slavery. Early in the novel, Douglass’s character is a symbolic representation of the common perception of slavery as being physically owned.

McCann has the character of Douglass interact with several fictional people suffering from famine, and after witnessing starvation and extreme social injustice in Ireland, Kemp said, the fictional Douglass begins to realize that human bondage extends far beyond the physical chains of slavery in America. Through Douglass, McCann proposes a nuanced way of thinking about human autonomy as a spectrum, rather than a binary between slavery and freedom.

“While historians do history and try to understand how the facts of the past have shaped the present, biographical novelists use history to create something new, to create a work of literature that has societal and personal implications to a present-day audience,” Kemp said. “By fictionalizing these scenes of famine in his novel, McCann humanizes these people from the past and allows readers to see the similarities between Douglass’s suffering as a slave and the suffering of famine victims. Identifying these similarities may even help readers to critically examine harmful structures in our own, modern-day society.”

While many aspects of conducting and presenting original research, from writing the abstract to explaining why the work is important, allowed her to develop practical skills that will be valuable in her career, Kemp said the experience held personal value for her as well.

“I think it’s a really amazing opportunity as an undergrad,” she said. “We were researching and writing in order to contribute to a body of knowledge and to genuinely be a part of an important conversation.”