Some farmers across the Midwest have installed bioreactors to help stop nutrients in agricultural runoff from washing into nearby lakes, rivers and streams. By filtering drainage water through a trench filled with woodchips or a similar material, these systems take advantage of naturally occurring microbes to break down nitrogen compounds and improve regional water quality.

There’s just one problem with this low-cost, easy-to-maintain technology: It isn’t very efficient, and scientists do not understand it well enough to improve it.

A team of University of Minnesota researchers is now studying the microbial mechanisms behind bioreactors to discover how to make them more efficient at removing nitrogen and phosphorus from agricultural runoff. Led by principal investigator Carl Rosen, Ph.D., head of the U’s Department of Soil, Water and Climate, the team has constructed a 360-foot-long, field-scale bioreactor in Willmar, Minn., to measure the way different variables affect the system’s efficiency. The project’s initial funding came from the MnDRIVE Advancing Industry, Conserving Our Environment research area, with additional support from Discovery Farms Minnesota.

While a promising technology, current bioreactors only remove about one-third of nitrates from the water, according to a 2012 study of woodchip bioreactors conducted by researchers at Iowa State University, Kansas State University and the Iowa Soybean Association. Low temperatures tend to curb the systems’ efficiency and heavy rainfall can overload them, causing excess water to skip the bioreactor. The U of M researchers are exploring how to work against these pitfalls to not only remove more nitrates, but to reduce phosphorus as well. Their strategies include supplementing bioreactors with specific types of microbes, as well as adding different food sources to fuel the microbes’ ability to efficiently remove nitrogen.

“We are trying to speed up the removal rates so that the process becomes more efficient,” said Gary Feyereisen, Ph.D., agricultural engineer with the USDA-Agricultural Research Service and adjunct assistant professor with the U’s College of Food, Agricultural and Natural Resource Sciences. “If we can increase the rate water flows through the bioreactor while maintaining efficiency, less water will bypass the system and more contaminants will be removed.” 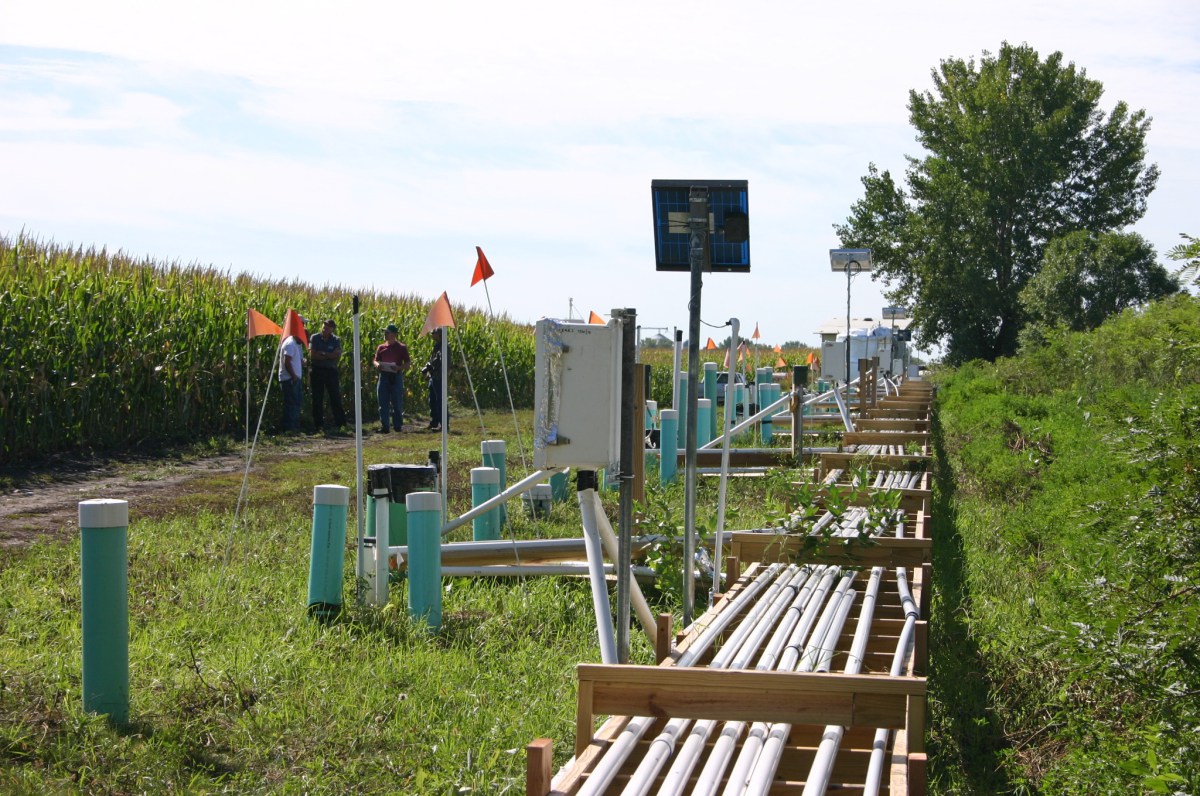 The 360-foot-long bioreactor in Willmar, Minn., is divided into compartments that allow researchers to test different conditions that can increase the system’s efficiency. Credit: Michael Winikoff, BioTechnology Institute 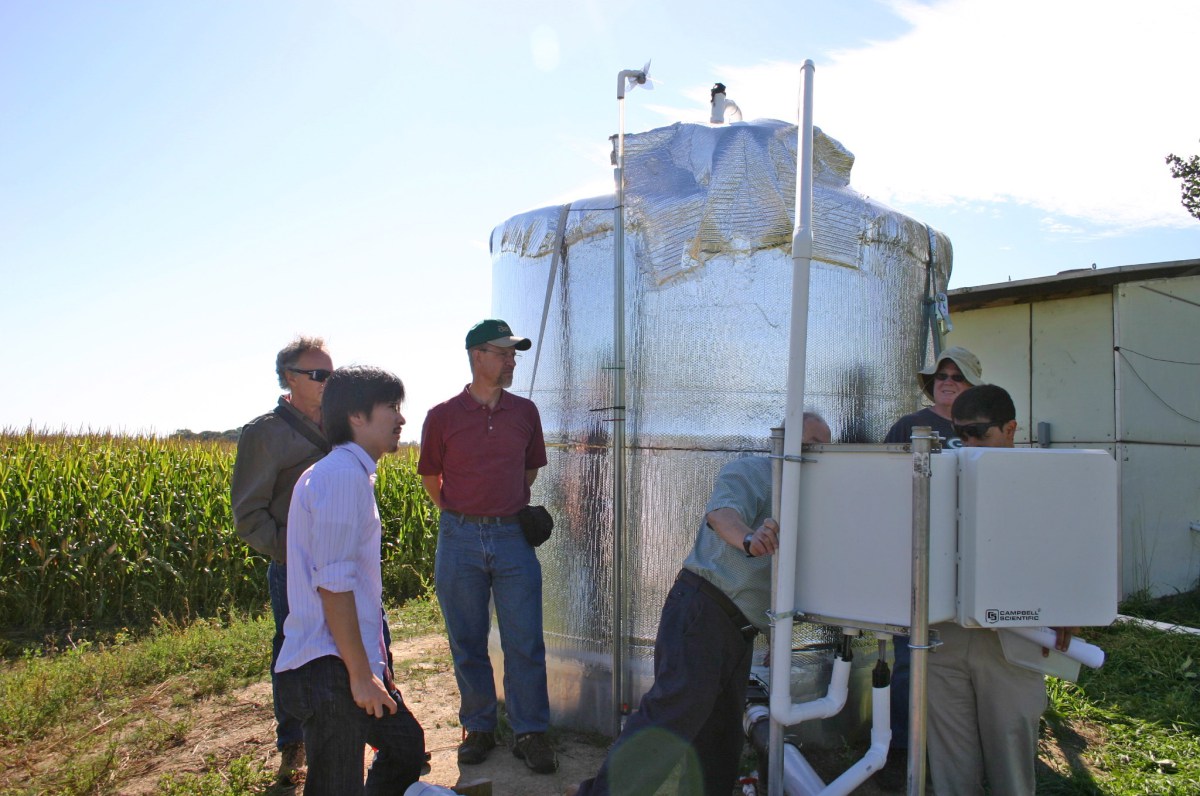 Researchers examine controls next to a large water storage tank, which supplies the bioreactor compartments with water at a stable pressure and flow rate. Credit: Michael Winikoff, BioTechnology Institute 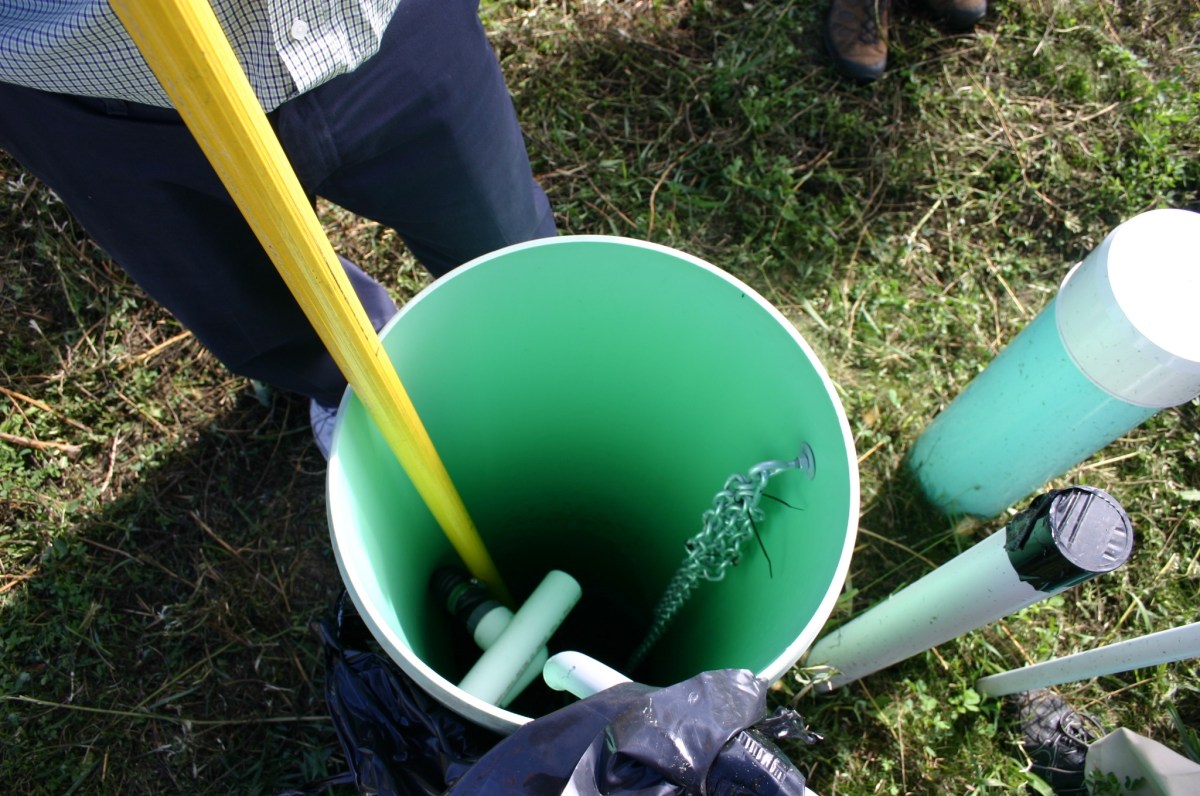 Researchers remove the cap from a pipe that allows them to sample water flow, nutrients and microorganisms within the bioreactor. Credit: Michael Winikoff, BioTechnology Institute

So far, U researchers have constructed the bioreactor and divided it into eight compartments with equal water flow. The next step is to introduce different conditions to each compartment — such as different types of microbes or a new carbon source to feed the microbes — to measure how well it removes nitrogen from the water. Researchers will use genome sequencing methods to identify the bacteria that are best suited to remove nitrate and phosphorus in low-oxygen environments, as they believe these types will break down water contaminants more easily.

The team is seeking additional funding to support technicians who can log data at each compartment, along with water samplers who can support analyses for contaminants in the water leaving the bioreactor. They will also draw woodchip samples from each compartment to see whether microbe populations flourish or falter through changing temperatures, different concentrations of nitrates and other conditions.

“This is one of the world’s only field-scale bioreactors of its kind,” said Michael Sadowsky, Ph.D., director of the U’s BioTechnology Institute. “We are using it as the basis for experiments that will help us optimize performance of these systems as a whole.”

The bioreactor is a platform technology, meaning that it can be used for many different applications. Beyond the scope of agricultural runoff, researchers believe the technology could remove contaminants like sulfur from water used in other operations, such as mining and aquaculture.

Moving forward, the researchers hope to partner with their counterparts in MnDRIVE’s Robotics, Sensors and Advanced Manufacturing research area to integrate sensors that can detect the concentration of nitrates and phosphorus in the water exiting the reactor. Such sensors could make the system easier to use and may even allow an operator to control it remotely through a smartphone app.

“I view this technology in the future as being fully automated,” Sadowsky said. “We really want to make it have minimal requirements for the farmer.”

MnDRIVE is a landmark partnership between the University and the state of Minnesota that aligns areas of University strength with the state’s key and emerging industries to advance new discoveries that address grand challenges.