Catamaran Bio, Based in Part on UMN Research, Soars with Early Funding

A biotech startup that includes technology from the University of Minnesota created to bring new cancer therapies to life has attracted high levels of funding during its early-stage investment rounds.

Catamaran Bio, founded by life sciences investors and academic research groups, including the UMN Technology Commercialization’s Venture Center, has raised a whopping $42 million total through its seed and Series A funding rounds, providing crucial support for the company to retain top talent and accelerate the development of its cancer therapies. This early investment is well above the average seed and Series A funding rounds for US startups ($5.6 million and $15.7 million respectively in 2018, according to Tech Crunch) and is the largest such round yet for a UMN startup. Included in its funding is support from the UMN Discovery Capital Investment Program.

Boston-based Catamaran Bio is the first UMN startup to be incubated by a top-tier venture capital firm. SV Health Investors, based in London with a US office in Boston, is one of the longest-tenured health care investment managers in the world and has supported many biotech companies that successfully reached the acquisition or public offering stage. The successful launch of Catamaran Bio attests to the Twin Cities’ role as an emerging hub for biotechnology, with the University and industry leaders as the engines of its growth.

Catamaran Bio is based, in part, on research and discoveries by Branden Moriarity, PhD, a genome engineering expert and assistant professor of pediatrics in the Division of Hematology/Oncology in the University of Minnesota Medical School and the Masonic Cancer Center, and one of two scientific founders of the company. His technology is enabling natural killer (NK) cells to be efficiently engineered as an “off the shelf” customizable cell therapy for the treatment of cancer. 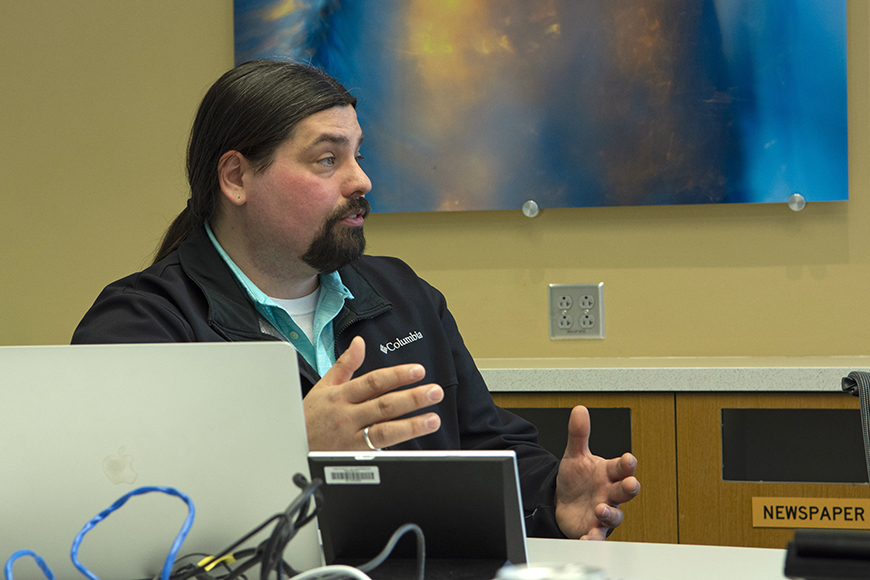 Branden Moriarity, PhD, discusses his research during a lab visit by Vice President for Research Chris Cramer in February 2020. UMN/OVPR

The process would allow patients to receive cells specifically designed to kill the cancer cells within their body. These cells could provide improvements over the first generation of T-cell based cancer immunotherapy, as NK cells do not need to be made using the patient’s own cells and do not induce toxic side effects associated with the use of T cells. Moriarity is working with Catamaran Bio to advance the manufacturing of engineered NK cells to treat solid tumors, which comprise the majority of cancers that affect millions of people.

Prior to Catamaran Bio, research by Moriarity and fellow Medical School pediatrics researcher David Largaespada, PhD, led to the launch of startup B-MoGen Biotechnologies. B-MoGen set out to develop and market advanced gene editing products and services for academia and industry. It was acquired by Bio-Techne Corporation in 2019.

Catamaran Bio has also sponsored research from Moriarity’s lab and the lab of Beau Webber, PhD, assistant professor of pediatrics in the UMN Twin Cities Medical School and the Masonic Cancer Center.

See the news release for more.