When it comes to polar research, the University of Minnesota is striving to reach new heights — or rather, new depths.

In June, construction began on a first-of-its-kind drilling platform that U researchers will use to penetrate almost 11,000 feet below the surface of the main polar ice cap in East Antarctica. The Rapid Access Ice Drill (RAID) system, funded by a $9 million grant from the National Science Foundation’s Office of Polar Programs, will give researchers their first look at the point where the ice meets the bedrock below at this depth. The grant is the largest ever awarded to a project based on the U’s Duluth campus and could give researchers access to ice more than 1 million years old. 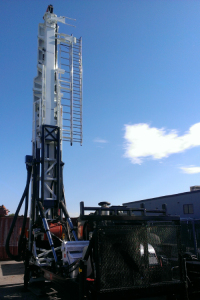 Researchers from many disciplines will make use of the drilling platform, from geologists like Goodge interested in examining the first-ever rock cores taken from beneath the ice sheets, to biologists eager to search for microorganisms that might be living in and below the ancient ice. Ice cores could also provide records of Earth’s climate change from long ago, allowing researchers to refine models of future climate. Rock cores from below the ice could reveal more about how Antarctica fit into billion-year-old supercontinents, enormous masses of land from which the present-day continents broke out.

Right now, researchers can only hypothesize what they will find at the interface where the ice cap meets the rock below. The ice may have frozen into place along the surface of the rock long ago, for example, or it may be sitting atop a layer of water.

“That has big implications for the stability of the ice sheet,” Goodge said. “Could it potentially slide off the bedrock into the ocean and cause sea levels to rise? We will have a way of assessing what the current conditions are.”

According to Goodge, West Antartica is where the fastest ice streams in Antarctica occur and are in the most danger of “collapsing.” Last week, the Wissard (Whillans Ice Stream Subglacial Access Research Drilling) project reported discovering thousands of micro-organisms living in a known subglacial lake, Lake Whillans, buried 800 meters under the ice sheet. The RAID project, which is designed to learn about the oldest ice in Antarctica, will explore the thicker and colder ice sheet of East Antarctica.

The RAID project started in 2012, when an earlier round of NSF funding fueled the design work and a feasibility study for the drilling platform, which is currently under construction by Salt Lake City firm DOSECC Exploration Services. After construction and testing, Goodge and his team will ship the drill in five separate pieces for final assembly in Antarctica, allowing research to begin in late 2017.