About 1.3 billion years ago, a pair of black holes suddenly spiraled in on each other and merged, creating a new spinning black hole—all in just one-fifth of a second. The immense energy released by this cosmic cataclysm generated waves that shook the very fabric of space and rippled out through the cosmos.

In 1916 Albert Einstein’s theory of general relativity predicted that events like this would produce such ripples in the fabric of space, which he called gravitational waves. But they would be so weak that he thought they would never be detected.

So with today’s announcement that a team of some 1,000 scientists from the Advanced LIGO (Laser Interferometer Gravitational-wave Observatory) project—including University of Minnesota researcher Vuk Mandic and his colleagues—has just detected gravitational waves, it doesn’t take an Einstein to see the excitement rippling through the scientific world. The waves stem from the black hole merger described above, and their discovery validates Einstein’s prediction and opens new avenues for understanding the Universe.

“There are several ‘firsts’ here,” says Mandic, an associate professor of physics in the College of Science and Engineering. “This is the first direct detection of gravitational waves and the first test of Einstein’s theory of general relativity in a very strong gravitational field. This is also an observation that black holes can live in pairs and that they can merge over the lifetime of the Universe—13.7 billion years.”

“This result shows that LIGO detectors are a successful tool in detecting gravitational waves and giving astronomical information about the Universe,” adds Gwynne Crowder, a postdoc in Mandic’s research group. “With gravitational waves we can ‘see’ the most massive and energetic things in the Universe, like black holes, supermassive black holes, black hole mergers, neutron star mergers, and the collapse of stars or the explosions known as supernovae.”

Gravitational waves perturb space in the plane perpendicular to their direction of movement, alternately stretching it in one dimension while shrinking it in the other and vice versa. 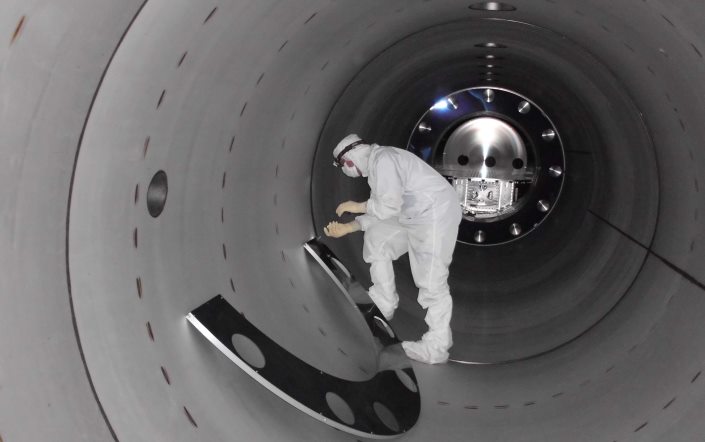 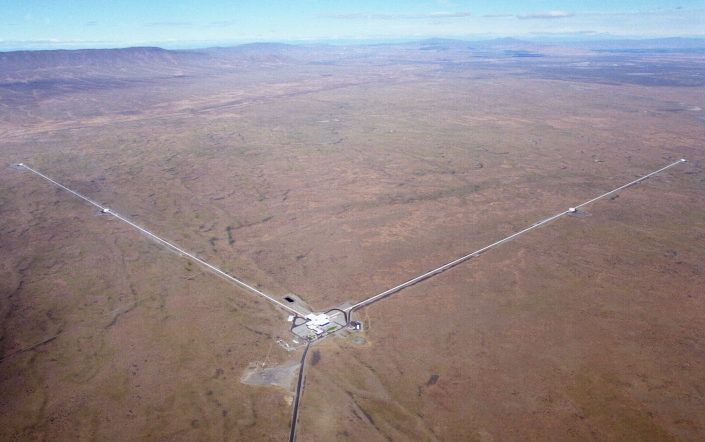 The LIGO Laboratory operates two detector sites, one near Hanford in eastern Washington, and another near Livingston, Louisiana. This photo shows the Hanford detector site. Photo Credit: Caltech/MIT/LIGO Lab

In Advanced LIGO—a 10 times more sensitive version of the earlier LIGO experiment, which did not detect gravitational waves—two perfectly synchronized laser beams travel down two 2.5-mile “arms” set at right angles to each other. Reflected by mirrors, the beams return and hit a detector, still in perfect synch.

When a gravitational wave stretches and shrinks the arms, the shifting travel distances put the beams out of synch, sending a signal to a detector. That happened on September 14, 2015, when the signal of the black hole merger appeared.

“At its peak, the stretching and shrinking of the arms was only 4 x 10-18 meters, or about one-thousandth the size of a proton—that’s the nucleus of hydrogen, the smallest atom,” Mandic explains. “And the whole merger took only about one-fifth of a second.” No wonder Einstein thought no one would ever detect gravitational waves.

LIGO operates two detectors, one at a site in Washington state and one in Louisiana. Comparing signals at widely separated sites allows scientists to discard any from local sources like seismic activity or rumbling trucks. In this case, the signal—which traveled at the speed of light—appeared in Louisiana before Washington, indicating it came from a generally southern direction.

The researchers fist suspected the signal was from a black hole merger because its form resembled predictions rooted in general relativity theory. Examining various scenarios, they found it matched—nearly perfectly—the signal predicted for the merger of black holes with masses of 36 and 29 times that of the sun and at a distance of 1.3 billion light-years.

Those merging black holes originated with large stars that, after burning up all their hydrogen fuel, collapsed into black holes from the inward force of gravity. At some point they became paired and orbited together like the end weights on a spinning dumbbell. They drew closer together, accelerating the pace as their gravitational attraction grew.

The signal indicates that in their final orbit as separate black holes, they were speeding around at close to half the speed of light. In 0.2 seconds it was over; they had merged into a symmetric black hole with the mass of 62 suns. In the process, about 4.5 percent of their mass turned into the energy that was carried away by the gravitational waves.

Mandic’s group, among others, worked on understanding the implications of this event for the random “background noise” of gravitational waves that they look for. Those waves, which represent the summed-up contributions from many sources, fill the Universe with a steady murmur.

“These gravitational waves will be like the background sound from many conversations in a big room, where only the loudest or closest voices can be heard singly,” Crowder explains.

And what’s it like to be part of a team that confirmed one of Einstein’s predictions?

“Awesome!” says Mandic. “It is events like these that justify choosing a career in science and the many sacrifices made along the way.”