Every year, the Fibrominn Biomass Power Plant in Benson, Minn., produces 55 megawatts of renewable energy, enough to power about 40,000 homes, according to the Minnesota Department of Employment and Economic Development.  Elsewhere in the state, companies like 3M and Cargill are making use of biomaterials to manufacture staples like clothing, fuel and packaging materials. A multi-sector advocacy group, the Bioeconomy Coalition of Minnesota, is working at the policy level to impact decision making that supports growth of the state’s biofuel industry.

These commitments to sustainable energy and products are signs of Minnesota’s emerging bioeconomy where biomass, plant materials such as corn stalks and other biomass crops, provides the raw material for food, animal feed, fuels and other products.

As the industry grows, a team of University of Minnesota researchers is studying how to maximize the economic, environmental and social benefits for people across the state. Their project, “Building Community-based Bioeconomies,” a part of MnDRIVE’s Transdisciplinary Research Program, will bridge the barriers between disciplines, bringing together researchers in agriculture, robotics, landscape architecture and more to develop a holistic approach to a stronger bioeconomy in Minnesota and beyond.

“Improving the livelihoods of farmers and rural communities is a critical aspect of any sustainable bioeconomy,” said Nicholas Jordan, the project’s lead researcher and a professor with the U’s Department of Agronomy and Plant Genetics. “We’re trying to develop a process that not only helps our region, but one that could be replicated broadly on a national or global scale.”

The key component of developing strong bioeconomies is encouraging farmers to explore new uses for their farmland that supplement their existing crops. Devoting portions of their fields to a mix of biomass crops, including diverse native prairie mixes and cover crops, such as winter rye, farmers tap into new economic opportunities that also have environmental benefits, such as attracting pollinators, improved soil health, and increased water retention in the fields, which will be crucial going forward as Minnesota experiences less frequent but heavier rainfalls in the coming years.

When biomass or cover crops are planted, primary crops, such as corn and soybeans, are still harvestable, so farmers don’t miss out on profit from traditional cash crops. Cover crops are planted in the fall, harvested in the spring as raw biomass material, and processed in biomass processing facilities that can be owned in local coops by farmers in the area. These processing facilities treat biomass to greatly improve its energy value, producing dense, dry pellets that can be used to create biofuels, feeds and other products. 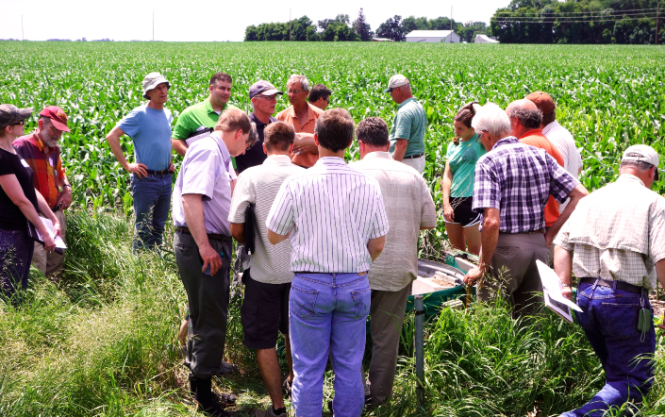 Farmers, conservationists and U researchers discuss how biomass crops can produce healthy soil, cleaner water and abundant wildlife in addition to biomass.

Between crops like winter rye and Minnesota’s large quantity of mature cornstalks, which currently go largely unused, the state has the potential for a significant biomass supply. According to researchers, Minnesota’s agricultural lands have the potential to produce 30 million tons per year of biomass – that’s equivalent to 80 percent of the state’s corn crop with little impact on current crop production. With that level of production, biomass could significantly grow the state’s agricultural economy since biomass can be used to supplement corn in biorefineries and livestock farming. In the long run, the state’s farmers and rural communities could benefit greatly from biomass production, especially since biomass crops would both diversify and expand agricultural income.

If expanding Minnesota’s bioeconomy holds so much promise, why hasn’t it been done already? The barrier, Jordan said, is commercialization. For farmers, agricultural groups and the others to participate, they need to be sure the bioeconomy is sustainable and will not damage their livelihoods. This is why researchers have devoted a significant part of the project to developing new technologies that improve biomass production and help farmers to analyze and make decisions about additional land use opportunities.

New Technology to Boost the Bioeconomy

With biomass in large supply, Tim Smith, Ph.D., associate professor of biosystems and agricultural engineering, is looking at how best to use the material itself. Smith is working on considerations such as how to most effectively feed livestock with biomass and what type of crop is the best option for growing biomass. He is also examining emerging technology that can better refine biomass, adding value to the raw material that can make it more valuable to sell and help establish it as a commodity.

Meanwhile, out in the field, Volkan Isler, Ph.D., associate professor of computer science and head of the U’s Robotic Sensor Networks Lab, is partnering with Rowbot, a startup company that develops robots for agricultural use, to develop “smarter” versions of existing automated farming robots that can seed cover crops as they guide themselves along the field, allowing farmers to sow biomass without requiring workers to spend more time in the field. At the same time, Isler is working on unmanned aerial vehicles or “drones” to fly overhead and help control and coordinate the seeding robots below.

Putting the Ideas in Motion

Researchers are working directly with Minnesota farmers to test their ideas and learn more about the challenges farmers face when it comes to cultivating a bioeconomy. Last year, researchers conducted a series of eight workshops in the Minnesota River basin, a region outlined by the cities of Mankato, New Ulm and St. Peter. This winter, they will conduct a second set of workshops where they will share information with a diverse group, including farmers, conservationists, and organizations involved in regional economic development.

The workshops will include use of state-of-the-art technology to explore options for new ways for farmers to use their lands. Using a touchscreen visualization interface developed by the university’s U Spatial program, researchers can engage with farmers to explore alternative landscapes, figure out supply chains, run computer simulations and make calculated decisions. David Mulla, Ph.D., a researcher from the U’s Department of Soil, Water and Climate, David Pitt, Ph.D, a faculty member in Landscape Architecture, with support from Len Kne of U-Spatial, are working with those in the region to make decisions based on measurements like soil quality, slopes and nearby waterways. 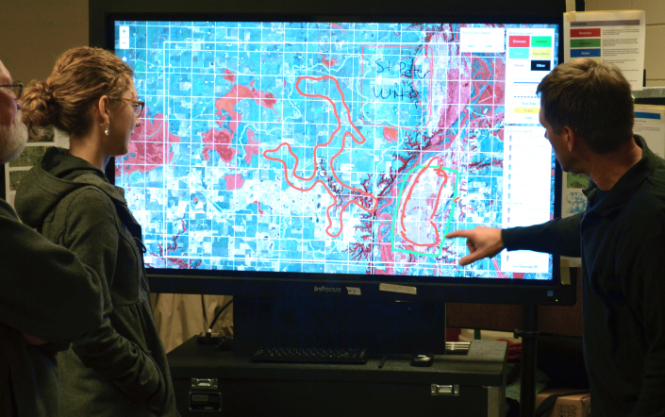 Touch screen visualizations help researchers and regional farmers partner on planning innovative ways to get the most out of the land.

Another researcher on the team, Carissa Slotterback, Ph.D., an associate professor in the Humphrey School of Public Affairs, leads community engagement with the project. Slotterback said she and the other researchers have devoted a lot of time to meeting people in the region and getting to know their needs. As the pilot project on the Minnesota River basin moves forward, she aims to continue these discussions and engage other stakeholders to ensure the project takes everyone’s interests into account.

“We’re looking at ways to really bring the community into the research process,” Slotterback said. “These relationships are absolutely critical to forming a strong, sustainable bioeconomy in the region that works for the benefit of all.”

Going forward, the researchers plan to work with experts from Minnesota’s neighboring states, including Iowa and South Dakota, where the economic and environmental benefits of a strong bioeconomy are as important as in Minnesota. The land use innovations and advanced visualization technologies the researchers are developing are customizable, capable of catering to other region’s landscapes and residents. For now, however, the researchers are focused on collaborating with communities in the Minnesota River basin.

“Together, we have to ask where this region wants to go in the future,” Jordan said. “We see tremendous opportunity for the farmers, producers and agricultural community in this region and the state to be leading the way in this rapidly growing sector.”

This project is supported by MnDRIVE, a landmark partnership between the university and the state of Minnesota that aligns areas of university strength with the state’s key and emerging industries to advance new discoveries that address grand challenges.