You’ve probably heard of “superbugs”—bacteria that are resistant to numerous antibiotics.

They’ve cost many lives and billions of dollars. And part of the solution could be as simple as treating our waste to a nice hot bath.

Timothy LaPara, Ph.D. of the University of Minnesota’s Department of Civil Engineering and a member of the BioTechnology Institute, has interests in wastewater microbiology and antibiotic resistance. He’s combined these to address a pandemic that threatens to return the world to a pre-penicillin era.

Worldwide, about 440,000 new cases of multidrug resistant tuberculosis occur each year, resulting in at least 150,000 deaths, according to the World Health Organization. Resistance to streptococcus pneumonia is also on the rise. And the infamous MRSA—an antibiotic-resistant staph infection—has become a global problem.

The result is a burgeoning population of antibiotic-resistant germs. Because bacterial DNA readily transfers among bacteria, concentrations of them—as occurs in human sewage and animal waste collection sites–can result in dense communities of resistant bacteria.

Changing the patterns of use of antibiotics on farms, in health care and consumer products is part of the solution, but can be politically fraught.

Killing the Bugs Where They Concentrate

LaPara’s proposed solution complements these existing approaches and kills the bugs where they concentrate: in human and animal waste.

When raw sewage is treated, it leaves behind a sewage sludge called biosolids. LaPara has found that raw sewage has 50,000 times more antibiotic resistant genes than what’s found in a typical river. But even after treatment, the remaining biosolids are thick with antibiotic resistant genes. These resistant bacteria potentially find their way into the human population through a variety of transmission means: they can be contained in fertilizer (one of the primary uses of biosolids), spread via the air, and included in the foods we consume. 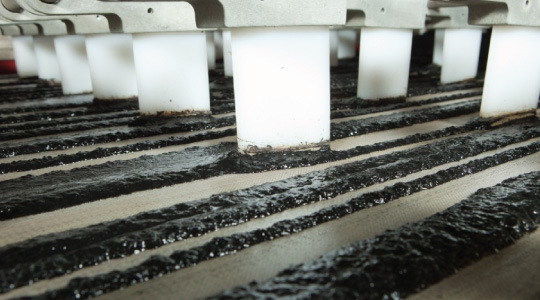 But heating biosolids can kill the bad guys. Here’s where the engineering tricks and microbiology magic come in. Sewage plants use naturally occurring bacteria to digest waste and a byproduct of that process is methane gas. Some of these plants use the methane to heat the biosolids to body temperature, which is perfect for the growth of sewage-munching bacteria, but also ideal for growing resistant bacteria.

“If we raise the temperature to about 130 degrees Fahrenheit, different, heat-loving bacteria will digest the biosolids,” explains LaPara. The higher temperatures kill off the resistant bacteria, but still generate the methane needed to keep the plant heated up. It’s a win-win.

That was the theory. LaPara’s lab tests showed that heated biosolids have 1/100th the amount of resistant bacteria as compared to unheated biosolids. To find out if the process has real-life promise, LaPara tested the sludge from a treatment plant in Duluth that already heats its digesters to 130 degrees. Sure enough, its residual sludge had 1/10th to 1/100th the concentration of resistant bacteria in biosolids from plants that operate at lower temperatures.

Says LaPara, “If I could get people to use the best treatment, I would have them do it like Duluth. We spend about fifteen billion dollars a year in the U.S. on wastewater treatment. For an additional cost of less than 10 percent, we could switch to a higher temperature. This could help end the resistant bacteria problem very quickly.”

Making the Most of a Hot Mess

But ridding ourselves of superbugs will take additional effort. “Everything we do with human waste, we could also do with animal waste,” says LaPara. He notes that more farms are beginning to generate methane from their animal waste for use as an energy source. The process could be used to kill off the antibiotic bacteria in animal waste as well, making the waste safer for use as fertilizer.

LaPara says there are a number of steps needed to get this process adopted widely. “Ten years ago, very few people were looking at this. Many of the research techniques we’re using were only developed in the last decade. This is not yet in the public health arena. But over the next ten years, I’d like to see our waste treatment community move toward more aggressive treatment of biosolids. We’ll reduce resistant bacteria and other pathogens as well.”

Post by Vincent Hyman, a freelance writer based in St. Paul, Minn.