Highlights From a Year of Excellence In Research

Last month, the University of Minnesota’s annual State of Research report highlighted a research enterprise that continues to grow, driven by greater diversification of funding sources and enhanced public-private partnership.

The report, produced by the Office of the Vice President for Research, also highlighted several ongoing research projects that are advancing knowledge across a wide variety of fields. These efforts are shedding light on youth brain function, boosting computing technology, exploring new mining processes and improving transportation systems.

Below, Inquiry explores each of these projects and their potential to benefit society.

Northeastern Minnesota is rich in ilmenite, a valuable iron-titanium oxide ore. Right now, however, the challenge of processing this ore and removing its impurities remains a major hurdle for industry.

A new processing method, developed by Process Research ORTECH Inc. in Canada, may be the key to refining high-purity titanium dioxide from Minnesota’s mineral deposits. In February 2016, the U’s Natural Resources Research Institute received $300,000 from the state Iron Range Resources and Rehabilitation Board, matched by additional funds from OVPR and U of M Duluth, to test this new technology and evaluate its potential economic impact.

The research centers on a representative ilmenite source northeast of Hoyt Lakes, Minn., one of at least 13 areas identified as having ilmenite mining potential. NRRI has processed over 20 tons of material from the Longnose Deposit and made concentrates to be tested with the new technology.

Titanium has many uses in industry. The metal can be alloyed with iron, aluminum and other elements to produce strong, lightweight materials for jet engines, dental implants and mobile phones, or refined to create white pigments in paper, paints and plastics.

“The NRRI ilmenite pilot project is intended to provide a commercially-relevant, industrial-scale demonstration of unique technology to separate pure titanium dioxide from Minnesota ilmenite ore,” said Rolf Weberg, Ph.D., NRRI director. “Initial results are promising and final results and recommendations will be available in mid-April. Successful demonstration has the potential to expand the portfolio of Minnesota mineral opportunities and provide a path to sustainable development of a Minnesota resource.”

See the press release for more about the project.

Two researchers from the College of Liberal Arts Department of Psychology aim to understand how substance use affects brain function, behavior and health in youth.

William Iacono, Ph.D., Regents Professor and Distinguished McKnight University Professor of psychology, and Monica Luciana, Ph.D., professor and department chair, received a total of $7.4 million in funding from the National Institutes of Health’s National Institute on Drug Abuse in fiscal year 2016 to support research at the University’s site for the Adolescent Brain Cognitive Development study, which is one of 19 collaborative sites nationwide.

The researchers will interview children, ask them to complete games and puzzles that assess their cognitive function, take samples for genetic testing and use magnetic resonance imaging to understand brain activity.

Iacono and Luciana write that they are excited to be part of the ABCD endeavor, and are now enrolling twins and non-twins, along with their families, to participate.

“By examining how kids’ brains and behaviors are changing over time, we hope to better understand cause-and-effect associations between risk-taking behaviors, such as substance use, and the emergence of psychological disorders. We will examine genetic versus environmental influences on these outcomes, and how we can use this information to promote health and well-being in young people as they grow into adulthood.”

Computers have rapidly evolved over the years, continually growing more efficient and powerful. But that progress could soon slow as computers near the upper limits of what’s possible with modern technology.

Jian-Ping Wang, Ph.D., Distinguished McKnight University Professor and Robert F. Hartmann Chair of electrical and computer engineering in the College of Science and Engineering, is leading an effort to rethink the computer from the ground up by developing “spintronic” systems — computers that operate using an electron’s spin, rather than its charge. Wang is director of the Center for Spintronic Materials, Interfaces and Novel Architectures (C-SPIN), which brings together top researchers from 19 universities across the nation to develop next-generation computing technologies.

In fiscal year 2016, Wang received $5.6 million as part of a five-year, $29 million grant from the U.S. Department of Defense’s Defense Advance Research Project Agency and the Semiconductor Research Corporation to fund C-SPIN’s continued research into this emerging technology.

“Spin-based computing has the potential to be faster, smaller and more energy-efficient than conventional charge-based computer systems,” Wang said. “In the past four years, C-SPIN’s vertically integrated efforts have produced tens of new materials, devices and computing architectures — many of which are already being protected by patents and will be pursued by industry for further product development.” 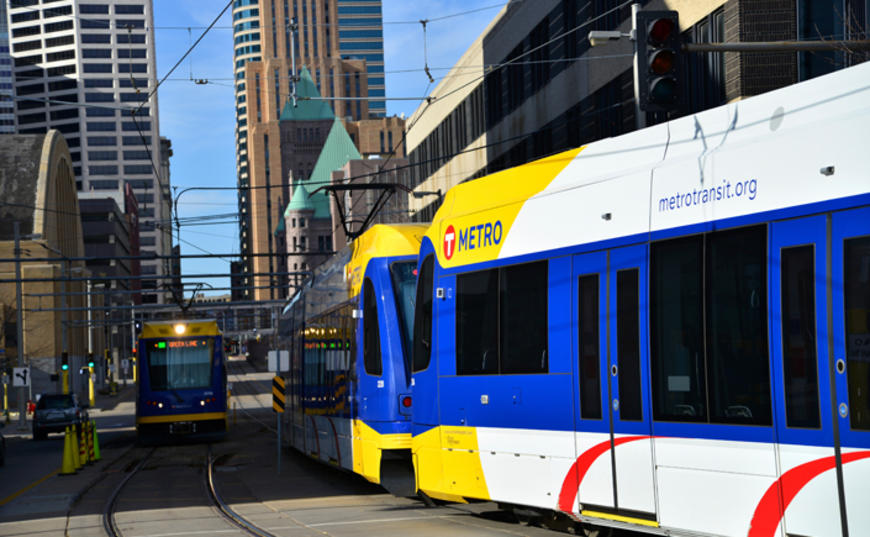 For residents living in some of the country’s densest population centers, efficient transportation systems are essential for getting to work quickly and reliably.

The Accessibility Observatory, a program of the Center for Transportation Studies and the Department of Civil, Environmental and Geo-Engineering within CSE, received a five-year, $1.6 million award to collect and map data on city residents’ access to jobs by car, public transit, bicycle and walking. The project, called the National Accessibility Evaluation Pooled-Fund Study, is funded by the Minnesota Department of Transportation and 11 other transportation agencies across the nation.

The new dataset and mapping tools, updated annually, will help transportation agencies nationwide to evaluate and manage performance of local transportation systems, as well as to research and plan more effective systems. As part of the study, researchers will also publish a series of reports for the 50 largest metropolitan areas in the U.S.