Marc Hillmyer’s office is a spare, bright green island on the second floor of Smith Hall. In the hallway outside his door, students and researchers in chemistry, chemical engineering, and materials science generate a low buzz of conversation as they wait. The energy is palpable.

This is where the future of plastics is taking shape in the transition from petroleum to renewable sources. With more than 300 pounds of synthetic polymers produced per person per year in the United States—almost all from oil and only a fraction recycled—a lot is at stake.

“Students today want to work on environmental problems,” says Hillmyer. “They embrace the search for a sustainable future through research. They’re driven by the motivation to solve tough problems.”

Hillmyer, in turn, is motivated by the next generation. Since he joined the faculty in the College of Science & Engineering at the University of Minnesota in 1997, he has assembled an interdisciplinary research team that currently includes 14 graduate students, nine undergraduates, a dozen postdoctoral researchers, and a visiting scholar.

“I love their aggressive approach to research—‘They are driven to find the answers,’” he says. “It stretches me, and I like that.”

Hillmyer’s long stride and easy-going demeanor belie the pace of his work life. He has drawn millions of dollars in research grants to the University of Minnesota and published dozens of articles that are among the most cited in polymer research. Because of his creative leadership in bridging organic chemistry and engineering for such a critical area, he was named a Distinguished McKnight University Professor in 2010.

On campus, Hillmyer contributes to several centers, including the Institute on the Environment, Initiative for Renewable Energy and the Environment (IREE), Center for Sustainable Polymers, Materials Research Science and Engineering Center (MSREC), and the Industrial Partnership for Research in Interfacial and Materials Engineering (IPrime).

He excels at collaboration with faculty in several departments across the University and with colleagues around the world. His many awards include election to the prestigious American Association for the Advancement of Science (AAAS).

“I fell in love with chemistry because of a great general chemistry professor,” says Hillmyer, who started college as a pre-med major. After general chemistry, he went on to organic chemistry—“often learning how to turning one stinky clear liquid into another stinky clear liquid,” he quips with a laugh—but this time, the professor happened to be working with polymers. It was an opportunity that clarified his interests. After that, he says, “the materials drove me.”

After earning a bachelor’s and Ph.D. in chemistry, Hillmyer made the transition to engineering. Minnesota was attractive because of its triple strength in chemistry, chemical engineering, and materials science. He first came for postdoctoral work with Frank Bates, Regents Professor of Chemical Engineering and Materials Science and one of the leading polymer scientists in the nation.

In polymer science, practitioners tend to be experts in either synthesis of new materials or in understanding and optimizing their properties, but not both. Hillmyer’s expertise spans the full range, from synthesis to new applications.

Flexibility is what the McKnight award will give Hillmyer. It will allow him to explore in new areas where it might be difficult to get a grant—hiring a student for a summer, for example, or trying out a new technology.

Colleagues around the country say Hillmyer is one of the most innovative polymer scientists in the nation. Says one: “His creativity, productivity, and intellect are defining the forefront of materials chemistry.”

Because of his work, the future of plastics will be greener. 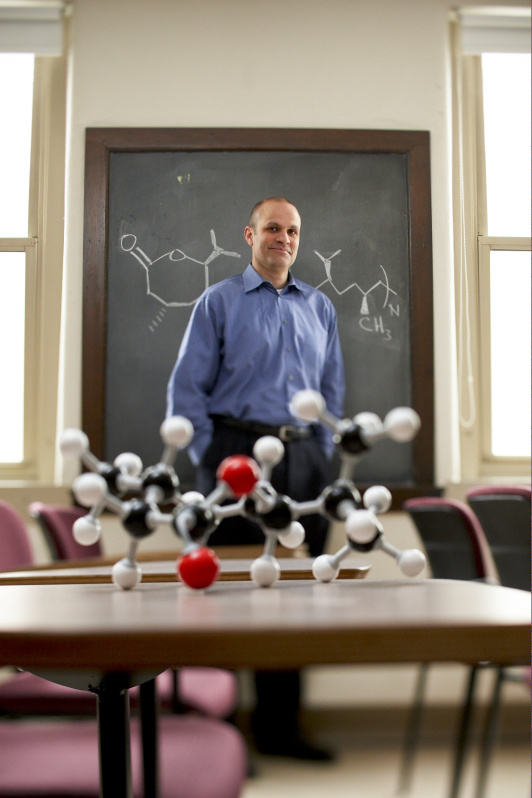 Photo credits: top by Eileen Harvala, Department of Chemistry; second by Jonathan Chapman, courtesy of the College of Science and Engineering.