Allen Levine, Ph.D., has more than a passing familiarity with the University of Minnesota’s research enterprise — in one capacity or another, he has been connected to the U for more than 45 years.

Levine, a professor in the Department of Food Science and Nutrition and adjunct in the Department of Psychiatry, began his role as the U’s new interim vice president for research this week. He previously served as vice provost for faculty and academic affairs, as well as dean of the College of Food, Agricultural and Natural Resource Sciences. As head of the Office of the Vice President for Research, Levine will oversee the University’s $900 million research enterprise across all its campuses and facilities, including the administration of sponsored projects, research compliance and regulatory offices, and offices dedicated to economic development and technology commercialization. 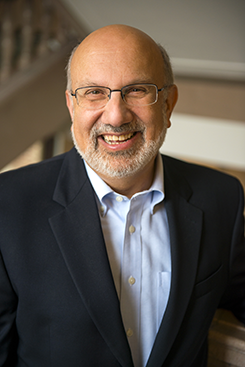 “In my new position, I look forward to keeping the University’s research enterprise moving forward and preparing the office for its next permanent director,” he said. “Since arriving, I have found the staff at OVPR to be knowledgeable and well suited to the important work they do for the U.”

Throughout his research career in behavioral science, Levine has focused on how the brain regulates food intake. Funded by the National Institutes of Health and other sources for more than 35 years, Levine’s research explores how neural circuitry influences feelings of hunger, as well as the reward people experience from eating foods. This research led to his position as president of the Obesity Society, a national nonprofit that works to expand research into the prevention and treatment of obesity and to reduce the stigma and discrimination affecting those with obesity.

Levine has published over 300 scientific papers and over 100 review articles, editorials and book reviews, and has firsthand experience working with administrative research groups such as the Sponsored Projects Administration, Institutional Review Board and Institutional Animal Care and Use Committee. He also has experience collaborating with researchers internationally, as he has published many papers with a researcher at the University of Waikato in Hamilton, New Zealand.

In addition to conducting his own research, Levine also has experience in research administration. As associate director of research at the Minneapolis Veterans Affairs Medical Center, he dealt with all aspects of the research program, including managing incoming grants to researchers at the VA. Separately, Levine has also conducted external reviews of nutrition research programs across the country.

As he begins his role as interim VP, Levine said he believes OVPR’s strengths lie in the expertise of its staff and its emphasis on fostering interdisciplinary collaborations. As someone who has had appointments that stretch across five University departments — food science and nutrition, psychiatry, psychology, medicine, and surgery — Levine said he recognizes the importance of working together across disciplines. The problems society faces often spread across several fields of study.

As one of only four universities nationwide that has schools in agriculture, engineering, law, medicine and veterinary medicine all on a single campus, the U of M stands apart from other research universities, Levine said.

“We are well-positioned to address these challenges because we have expertise across so many disciplines,” he said. “Obesity, for example, is a complicated phenomenon that spans many fields, from psychology and nutrition to biochemistry and genetics. Here at the U, we have the opportunity to bring experts together from each of these fields and conduct groundbreaking research that brings us closer to new methods for treating and preventing this condition.”

Apart from his scientific research and teaching, Levine has nurtured a lifelong interest in music. He enjoys playing classical and jazz piano, having cut his teeth as a musician at resorts in New York’s Catskill Mountains. In Minnesota he was a longtime accordionist for a band that played Klezmer music — a type of Jewish folk music that originated in Eastern Europe — at weddings and bar mitzvahs.