What do disease early detection, rare-earth-free magnets and massive information storage and processing all have in common? Magnetic materials could be instrumental in a new wave of solutions in these areas.

Distinguished McKnight Professor Jian-Ping Wang is experimenting with magnetic materials for all these innovations, and more. Evident in his varied and monumental research endeavors, Wang’s approach to discovery is to pursue the impossible.

In 1998, Wang’s father — a former air force man, taller and stronger than his scientist son — was diagnosed with late-stage cancer. Although he battled the disease for ten years, he eventually succumbed to the ravaging effects of surgeries and harsh treatments.

“I thought to myself, there must be some way a doctor can find the disease at an early stage, not wait until it’s too late,” says Wang. “If physicians find the cancer at an early stage, they can prescribe prevention therapy and bypass harsh treatments. I asked myself, why is there no such way?”

Wang’s group set out to forge a solution, and were the first in the world to demonstrate a nano magnetic and spintronic sensing system for detecting cancer marker proteins at low concentrations using unprocessed human serum and urine samples. The resulting invention could detect biomarkers for ovarian and breast cancers, HIV, HPV and others, at early stages.

For more than forty years, scientists have tried repeatedly to produce what is known as “the holy grail of magnetic materials.” The compound, Fe16N2, was described by early researchers as having superior magnetic performance that couldn’t be explained by existing physics theories. But after decades of failed attempts to reproduce the early results, researchers had all but given up on the mythical compound.

Wang had a nagging feeling his fellow researchers had relented prematurely. After nearly a decade of study, his team presented a new theory that explained his predecessors’ early mistakes, and were able to reproduce the compound. Furthermore, unlike the original discovery, later researchers were able to replicate his results.

“There was a lot of doubt around this compound, but that didn’t sway us,” says Wang. “Now we have world attention on this topic. There were many opinions, but we turned out to be right.”

Wang is leading a joint team comprised of researchers from the U of M and Oak Ridge National Lab under a $2.6 million Department of Energy grant to pursue the material for a next-generation, environmentally friendly magnet. Rare-earth metals are used in large quantities for magnets in electric vehicles and windmill electricity generators; one small windmill needs about 600 pounds of these magnets. High-power magnets of this new composition, which are abundant on Earth and don’t involve rare-earth metals, could address this huge demand. 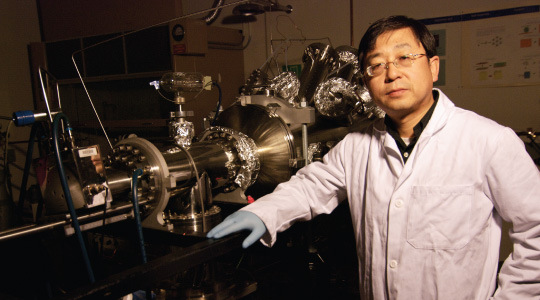 The rapid advancements in everyday technology have awed and amazed users in recent years. But Wang points out one area of development that’s stunted: laptop computing processors have reached the limits of their performance. The semiconductor/transistor combination that has powered personal computing since its inception has fundamental limits: You cannot make it smaller unless you expend more energy, which could cause overheat and power leakage.

“I thought: Why should we be limited by that rule? There must be some new approach, we must explore it,” he says. “We proposed and experimentally demonstrated, using spintronics devices with strong magnetic performance, you can not only store the information but also process the information, which cuts down the power consumption tremendously.”

Electrons have two functions: charge and spin. As leader in spintronics research, Wang is at the cutting edge of a new wave of technology that makes use of the oft-ignored “spin” property. Spintronics describes innovations enabled by the “spin” of electrons to code and process data, while older computers use the “charge” of the electron. Spintronics could give us low-power devices with massive storage capacity. Imagine a computer that turns on instantly, and processes data long after it’s powered down.

Now that the scientific and business community has taken notice of the potential for spintronics, professor Wang’s team is working out the kinks in the lab in an effort to prove that the technology could be manufactured for mass consumption.

Wang’s research portfolio is a reflection of his probing curiosity. Lauded by his peers as one of the most brilliant and productive scientists in his field, he hopes he can continue the momentum he’s experienced in his research.

“Sometimes I have no choice; these things just come to my mind and I can’t help but pursue them,” he says. “Sometimes I worry that I do too much, but I want to work hard when I still can. Maybe five years from now, I won’t be so productive in science anymore.”

Maybe. But if Wang’s recent pursuits are any indication, don’t count on it.