The iGEM—International Genetically Engineered Machines—competition challenges undergraduate students to identify real-world problems and solve them through biological engineering and design. Not only did the University of Minnesota’s team win a Gold Medal award at the 10th annual competition, held in Boston, Mass., Oct. 30 to Nov. 3, they also were awarded Best Environment project. And if that were not enough, they also filed with the university’s Office for Technology Commercialization to begin the patent process for part of their project.

Focusing on the bioremediation of the heavy metal mercury from contaminated water, Team Mntallica pulled students from microbiology, chemistry, engineering and business. The team of undergraduates spent four months creating a bacterial strain capable of detoxifying methyl mercury, along with an improved water filtration device.

Tarnowski said the team became interested in the project while researching concerns about mercury contamination in the state’s waterways, particularly in heavy mining areas. “High levels of mercury in the bloodstream can cause detrimental developmental disorders because it is a bioaccumulative neurotoxin,” she said. She added that many newborns in parts of Minnesota and around the world have mercury levels well above accepted thresholds.

“The students have designed a clever way to rid the environment of toxic mercury compounds,” says Michael Sadowsky, co-director of the MnDRIVE initiative Advancing Industry, Conserving our Environment, one of several funders. “Their project meshes very nicely with the overall bioremediation goals of our MnDRIVE initiative.”

The team’s first step was to engineer a bacterium that could pull mercury-containing compounds from the water and also survive in high concentrations of the toxic chemicals. The team started with the lab rat of microbiology—E. coli—and added the two features through genetic engineering.

According to Stephen Heinsch, also a senior genetics, cell biology and development major, mercury contamination in water appears in two forms – methyl mercury and mercury ions. The team first introduced genes for transporter proteins that allowed the contaminating mercury compounds to enter the bacteria. Then they introduced genes that encode for proteins, named MerA and MerB, to convert the water-soluble mercury into a recoverable form.

“Once methyl mercury or mercury ions are inside, MerA and MerB proteins convert them into volatile mercury which then escapes the cell in the gaseous state,” Heinsch said. In collaboration with Prof. Ed Nater’s group in the Department of Soil, Water, and Climate, the team was able to show that their engineered strain removed methyl mercury from the growth medium in test cultures.

Heinsch was quick to note that converting mercury compounds in the water to gaseous mercury in the air is not the final solution. “We didn’t want to make it someone else’s problem,” he said.

Enter the chemistry and engineering aspects of the project.

The team designed and fabricated a water filtration device to house the modified bacteria. Importantly, the team also encapsulated the bacteria in a silica gel to prevent their escape from the device, which also contains a filter that traps the volatilized mercury.

“The most important thing for us was to make it compatible with modern water filtration systems, which means being able to have water flowing through and being actively treated by live bacteria,” said Niko Le Mieux, a senior chemistry and physiology major.

The team consulted U of M faculty members Al Aksan and Larry Wackett, who had previously developed silica gel encapsulation for bioremediation purposes. Because the team needed live bacteria, they experimented with different conditions until they developed a new encapsulation procedure that retains cell viability. It is this method improvement for which the team filed with OTC. 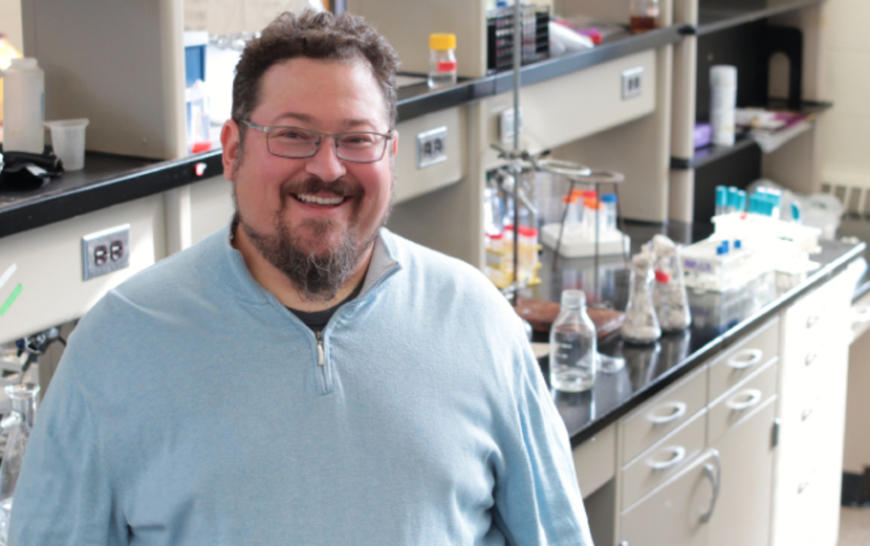 “Our team is combining aspects that people have thought about individually, but not necessarily together.” —iGEM advisor Jeffrey Gralnick

The team’s advisors included Prof. Jeffrey Gralnick and Prof. Casim Sarkar and graduate student Aunica Kane. Their work was also funded by the College of Biological Sciences, the BioTechnology Institute, the College of Science and Engineering, the School of Statistics, Student Union Activities, the Department of Microbiology, and the Department of Biomedical Engineering with additional support from the Office of Naval Research, Cargill, 3M, and Ecolab.