After her freshman year came to a close, Keyah Stone, a biochemistry major at the University of Minnesota, Morris, was eager to continue her study of biology. As a Native American, she also wanted to work with other indigenous peoples.

So when Stone heard about a summer 2014 UMM Research Experience for Undergraduates (REU) trip to the island of Borneo in Malaysia that offered both of these opportunities, she was immediately drawn to it.

“I had never gone abroad before or done any type of research,” Stone said. “This was the perfect opportunity to experience something completely new.”

Through the 10-week program, “Indigenous American to Indigenous Borneo: Adventures in Biology and Biodiversity,” Stone and four other Native American students as well as other students from other universities that come from either economically underserved backgrounds or ethnic/racial groups that have been historically underrepresented in the sciences conducted plant biology research in Borneo, part of the Malay Archipelago, the region where British biologist Alfred Russel Wallace developed his theory of natural selection.

The students’ work connected modern laboratory science with the indigenous peoples’ traditional ecological knowledge to further define the local flora and microbiota to investigate ways local communities could use local resources and traditional knowledge. It also provided the Native American students a chance to interact with and experience the culture of the indigenous people of Borneo. The indigenous communities of Borneo face many of the same challenges Native Americans have, including the loss of traditional practices and the exploitation of natural resources by foreigners.

“It was interesting, as a Native American, to meet indigenous tribes from another part of the world, as they face similar challenges to those my people do in preserving ancient traditions in a modern world,” Stone said. “It was great to see how rich in culture the Borneo tribes were and how grounded they were in their customs.” 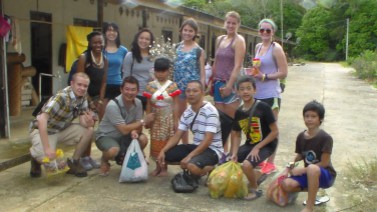 University of Minnesota, Morris, undergraduate Keyah Stone (third from left, back row) and other student researchers interact with community members in Sri Aman, an Iban community in Sarawak, Malaysia 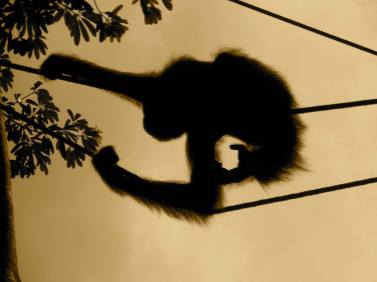 Silhouette of an orangutan at the Semenggoh Wildlife Reserve on the island of Borneo in Sarawak, Malaysia 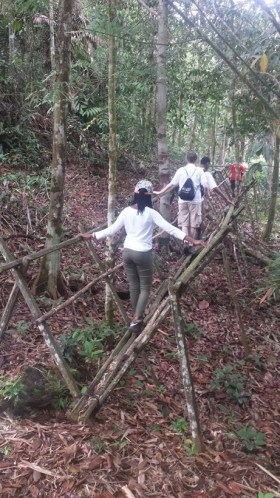 Students cross a traditional bamboo bridge in a Bidayuh community of Sarawak, Malaysia

Students spent the first half of the trip collecting data in Borneo and participating in cross-cultural activities. Their research areas ranged from studying exotic bacteria and fungi to determining how local communities could use plant oils, extracts and other materials to make economically viable products. One project focused on the properties and abundance of native bamboo species that the Bidayuh, one of the indigenous peoples, traditionally used for food, shelter, clothing and more. Students researched the properties of the bamboo, determined how prevalent it was in the Bidayuh’s region and drew out the potential economic impact that would result from the Bidayuh selling bamboo products. For the second half of the trip, they returned to the U.S. to analyze their data and write reports.

“In addition to learning about the plant biology in the region, students are discovering ways the indigenous communities can benefit from resources they have not traditionally used,” he said.

Meanwhile, students benefited from their first taste of field research. In contrast to guided lab work, students had to be proactive in leading their field research efforts and also had the chance meet the people whose lives it could change. Stone, intrigued by her experience, now plans to dive further into the field of phytochemistry — the study of the chemical processes and products in plants. Her time in Borneo has given her a clearer idea about where she wants her education to lead and made her better suited to pursue it.

“This program has given me a sense of independence,” she said. “I feel I’m more prepared to work in a real professional environment.”

The Borneo trip was the latest in a series of undergraduate research experiences Ceballos has helped guide since 2004, many funded by National Science Foundation grants. This grant provides students from economically challenged backgrounds and those from racial or ethnic groups historically underrepresented in the sciences with an interdisciplinary international research experience with a cultural context. Previous trips included destinations in Norway, Mexico, El Salvador, Costa Rica and India.

In each case, Ceballos said, students worked across disciplines with scientists from different cultures, gaining new skills and new knowledge that will help them to address their research problems and other challenges from a broader perspective.

Through its focus on involving students from underrepresented groups in scientific research, and exposing them to new, enriching cultural experiences, Ceballos hopes the programs funded through the NSF grant will ultimately boost the number of these students who are inspired to study the sciences and graduate with a related degree.

“Ultimately, we hope the success of this program and similar efforts will result in greater diversity within the sciences, a deficiency across all major university systems in the U.S.,” he said.