As the nation’s largest producer of iron ore and taconite, Minnesota has historically depended on its mining industry. The state’s mining operations, which have seen a resurgence in recent years, provide raw materials for everything from cars to electronics, employ more than 4,100 people and have a $3.2 billion annual impact, according to a recent report produced by the University of Minnesota Duluth’s Labovitz School of Business and Economics.

Now, a Minnesota-based business and U of M researchers are teaming up to develop industry solutions to fill this need. In 2009, Aitkin-based American Peat Technology, which manufactures environmentally beneficial products, signed its first research agreement with the U to partner with UMD’s Natural Resources Research Institute. The partnership opened the door for NRRI and APT to explore new ways to use peat to remove harmful pollutants from mine water. In 2013, APT signed another research agreement with the U under the new Minnesota Innovation Partnerships (MN-IP) program, establishing the partnership that continues today.

For years, APT had used peat — a brown, soil-like material made up of partly decomposed vegetable matter — as a raw material to produce a granular substrate that carries an environmentally-friendly, bacterial alternative to traditional nitrogen based fertilizer. Peatlands, prevalent throughout northern Minnesota, make the parent material a readily available resource.

Additionally, peat’s natural chemical properties enable it to adsorb heavy metals out of water.  The material, however, lacked the structural strength and permeability necessary for use in the treatment of wastewater. To remedy this, APT developed a heat-based hardening process that delivered a hard, dense granule that doesn’t break down in water yet preserves the natural chemical mechanisms that drive the adsorption of dissolved heavy metals. 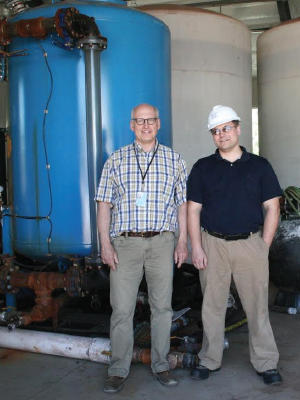 Peter Clevenstine (left) and Igor Kolomitsyn monitor a peat-based filtering system that cleans pollutants from the water used in mining.

Under the agreement with APT, NRRI research associate and organic chemist Igor Kolomitsyn, Ph.D. led a project targeting the chemical modification of the internal and external surfaces of APT’s peat granules. Kolomitsyn made gradual changes to increase the sorption ability on those surfaces. The resulting material has three times more capacity and is about 100 times more active than the original granule in absorbing cadmium and manganese, two common metals.

The new technology also eliminated a leaching of naturally occurring heavy metals, like manganese, from the parent peat material. The resulting industry solution, APTsorb III, was born. The technology is now protected by a joint patent application owned by APT and the U; APT signed an agreement to license the technology from the U through the Office for Technology Commercialization in March 2013.

APT’s location in northeast Minnesota’s Iron Range and NRRI’s proximity to it had originally helped Kolomitsyn and APT pinpoint mining companies’ needs, but it soon proved advantageous again. Through the Minnesota Department of Natural Resources, they found an opportunity to test APTsorb III at the region’s Soudan Underground Mine State Park, treating the discharge water at the now-repurposed iron ore mine. So far, the results are promising: APTsorb III requires less labor and runs at a far lower cost than the ion-exchange system already in place at the park. Kolomitsyn said peat granules have the potential to replace or complement ion exchange systems in the future.

“Kolomitsyn’s contributions have been crucial in our development of the APTsorb product line,” said Doug Green, APT’s co-owner and president. “Partnered with the U, American Peat Technology is even further equipped to be an industry leader in cleaning harmful contaminants out of our state’s water and helping mining companies meet water regulations.” 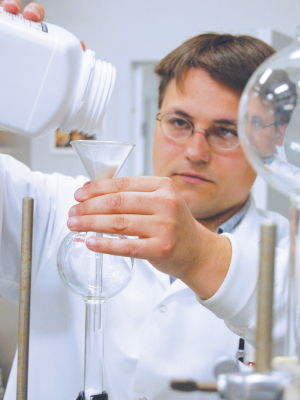 Igor Kolomitsyn in his lab at NRRI

In light of the new product’s potential, APT asked Kolomitsyn to investigate further chemical modification through the attachment of functional groups targeting sulfate and, possibly, other anions. Research has suggested that sulfates threaten the state’s diminishing native wild rice and other crops.

Early tests show that the new granules are absorbing sulfates as hoped. If successful, Kolomitsyn said the project will provide a lower-cost, more environmentally friendly and renewable option for sulfate removal.

NRRI’s partnership with APT is one of many ways the U aims to solve environmental challenges. An $18 million annual investment in U research by the Minnesota Legislature called MnDRIVE (Minnesota’s Discovery, Research and InnoVation Economy) has also set its sights on environmental conservation as one of its four core research areas. MnDRIVE is using science and technology to enhance opportunities for the state’s agriculture and mining industries, solve environmental challenges and make more efficient use of water resources.

Incoming males to a baboon troop may reap an evolutionary benefit from inducing miscarriages in high-ranking females.

Researchers hope to replace petroleum-based plastics and polymers with bio-based alternatives that harmlessly biodegrade or can be better recycled for reuse.

Research into how HVAC systems affect the spread of COVID-19 helped inform a plan that made classrooms as safe as possible for in-person learning.

A new online resource aims to streamline the process of applying for grants through private and corporate foundations.