From flooding to tornadoes to wildfires, natural disasters pose a latent threat to Minnesota. For communities across the state, having a thorough plan in place can mean the difference between large costly impacts and a resilient community.

For the last 10 years, spatial researchers at the University of Minnesota Duluth have been collaborating with local governments to help them prepare for the worst that nature might throw at them. These researchers, part of U-Spatial @UMD, provide the information communities need to draw up effective hazard mitigation plans, which help communities reduce or eliminate the long-term risks caused not just by fires, floods, and tornadoes, but, landslides, hailstorms, coastal erosion, and extreme temperatures.

An effective hazard mitigation plan can help protect a community’s residents, preserve its infrastructure, and limit the economic toll from hazards. The plans take into account an area’s population, how it uses its land, its history of natural disasters, and analysis of future risks from natural hazards.

With locations on both the Twin Cities and Duluth campuses, U-Spatial brings together strengths in spatial data, visualization, analysis, and spatial thinking. This expertise proves useful too when examining the data needed to plan for potential hazards, said Stacey Stark, associate director of U-Spatial @UMD.

“For each hazard, we create maps that can demonstrate how risk may vary across the county,” Stark said. “We’re all about the geographic data that can show how different hazard mitigation actions will be more or less appropriate in different parts of the county.”

Counties must submit an updated plan every five years to the Federal Emergency Management Agency (FEMA) to receive funding for mitigation projects. In the plans, they pay attention to the factors that might make a portion of the population less prepared for, or more vulnerable to, a natural hazard. For example, a community of mobile homes will be in greater danger during a tornado, while pockets of elderly populations or those with lower incomes might be less able to evacuate on short notice in the event of a flood.

The City of Duluth plans to take steps to reinforce the infrastructure along the Lake Superior coast so that it can better withstand storm damage, while also relocating any vulnerable coastline infrastructure to a location farther inland. When FEMA approves the hazard mitigation plan update for St. Louis County, where Duluth is located, the city will be eligible to apply for a federal grant that helps fund this effort.

“We use a lot of demographic factors to look at populations across the county,” Stark said. “Having the plan adopted allows the county to apply for FEMA funding as it becomes available for things like building a storm shelter.” 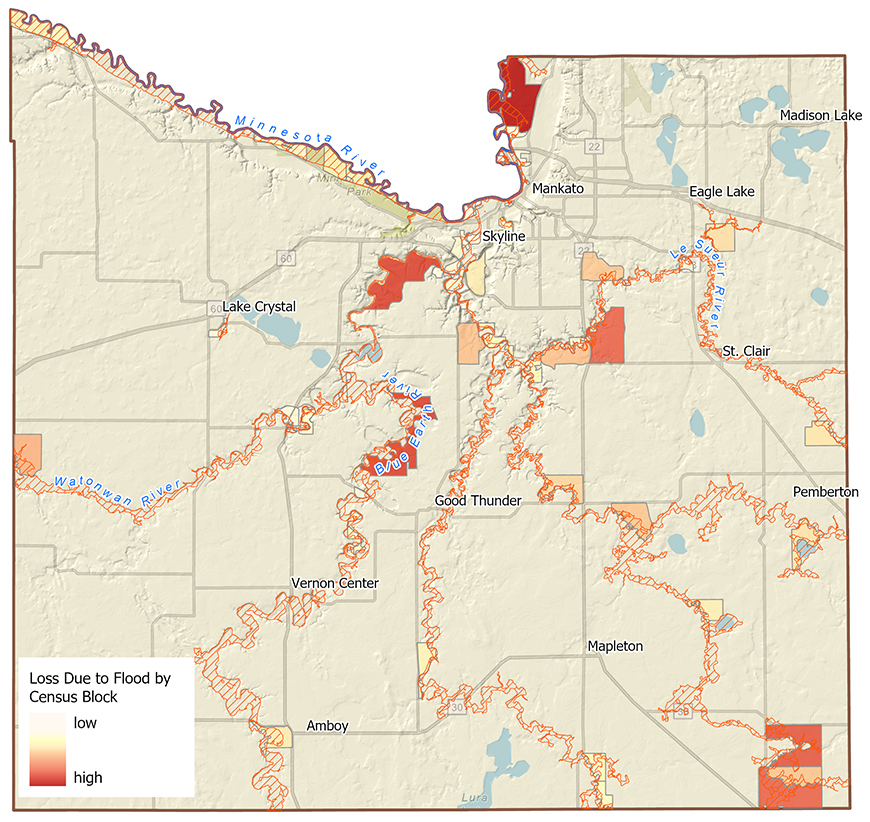 Visualizations like this one, which shows relative potential economic loss by census block for a 1 percent annual chance flood in Blue Earth County, help local governments build their hazard mitigation plans. The actual loss values have been removed from this image. Map credit: U-Spatial @UMD.

The collaborations began in 2009, when the Minnesota Homeland Security and Emergency Management Office, part of the state’s Department of Public Safety, asked UMD’s Geospatial Analysis Center (now U-Spatial @UMD) to conduct flood modeling for counties as part of the state’s hazard mitigation plan.

In the following years, similar collaborations formed with individual counties across the state, particularly those in Greater Minnesota. So far, UMD spatial researchers have completed projects with 39 Minnesota counties and two tribal nations, and are now collaborating with another nine counties and one tribal nation.

The collaboration isn’t just beneficial to the local governments involved. Many undergraduates, including those majoring in geographical information science within UMD’s College of Liberal Arts, have been involved in the research, giving them an opportunity to apply what they’ve learned in class to address real-world problems.

Instead of making recommendations about what the plan itself should say, Stark’s team provides the analysis the counties need to make informed decisions and chart the best path forward. Her team works with a planner who connects with county departments and communities within a given jurisdiction to obtain local concerns and communicate the findings. Public meetings allow the communities to gather input on proposed hazard mitigation strategies and priorities, after which they finalize the plan.

“We can bring a lot of visuals to the risk analysis,” Stark said. “It’s a way that we contribute to the safety of the state of Minnesota, by facilitating this planning for counties that aren’t able to do the risk analysis and outreach in-house.”

Planning for a Changing Climate

Last month, U-Spatial @UMD and the Minnesota Homeland Security and Emergency Management Office (HSEM) received an award at the Minnesota Climate Adaptation Partnership Conference for their work coordinating the process of integrating climate change adaptation into the State of Minnesota’s 2019 Hazard Mitigation Plan.

The plan, adopted in March 2019, integrates climate change trends and adaptation strategies for the first time as part of every individual hazard. It stands to influence the local hazard mitigation plans of Minnesota counties and also serve as a model for other states.