Two years ago, John Ohlfest’s career was changed by a dog. Batman, a shepherd mix named for his big ears, was treated for a brain tumor at the University of Minnesota in 2008. With groundbreaking treatment developed by Ohlfest, Batman lived until 2010 instead of less than 100 days as predicted.

Batman’s story spread, and so did the story of Ohlfest’s work.

It would be easy to mistake Ohlfest’s field as veterinary medicine. In fact, he’s an assistant professor in the Medical School, dividing his time between neurology and pediatrics. His passion is finding treatments for a deadly form of brain cancer in humans. Because of his pioneering work in neuro-oncology, Ohlfest is one of 10 recipients of the University’s McKnight Land-Grant Professorship for 2010-12.

“My grandmother died of a brain tumor,” says Ohlfest. “Watching her endure the side effects of that treatment was a transformative event in my life.”

Ohlfest believes we have the technology and intelligence to develop tumor-targeted therapy with fewer side effects. His dream is to develop a brain-cancer treatment that capitalizes on the patient’s own immune system rather than poisonous chemotherapy drugs to fight tumor cells.

Glioblastoma multiforme (GBM) is the most common primary brain tumor in adults; it claimed the life of Senator Ted Kennedy last year. With a two-year survival rate below 27 percent, it’s notoriously difficult to treat despite progress in cancer research. Research on rodents has proven to be a poor predictor of success in humans.

But one day attending a talk by a University veterinarian treating dogs with cancer, Ohlfest saw how canine cancer applied to his work.

He immediately began to collaborate with veterinary medicine professor Elizabeth Pluhar, a surgeon for dogs. He created a carefully sequenced combination of gene therapy and immunotherapy to treat tumors in dogs that are virtually identical to human brain tumors.

“He was one of the first researchers to grasp the significance of using pet dogs that naturally develop brain cancer to develop new methods of therapy for human patients,” says Pluhar. 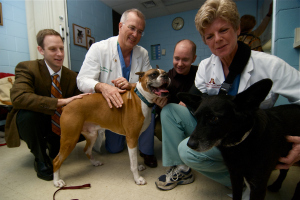 What he does is called translational medicine, and it fits perfectly with the University of Minnesota’s “One medicine, one science” philosophy.

Because of Batman’s success, the American Cancer Society gave Ohlfest a grant to treat 40 more dogs. He got a clinical trial approved the by the U.S. Food and Drug Administration to begin this year. Now the McKnight Land-Grant Professorship provides an important boost. 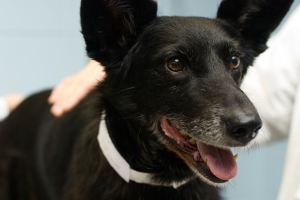 “This award will allow me to make faster progress toward my long-term goal of developing effective immunotherapy to treat brain tumors,” Ohlfest says. “The prestigious title has already helped me obtain additional grants.”

It’s also supporting the purchase of equipment that is able to measure the number of tumor-specific immune cells created by immunotherapy in animals. With this information, the team will improve the effectiveness of the treatment and translate their knowledge into clinical trials for humans.