If a turkey is the centerpiece of your Thanksgiving dinner, there’s a good chance it’s from Minnesota.

Every year, farmers in the state raise between 42 and 45 million turkeys, making the state the number one turkey producer in the US, according to the Minnesota Turkey Grower’s Association. Turkey production is not only a crucial part of Minnesota’s overall economy, but a source of livelihood for families running one of the 450 independent turkey farms across the state.

At the University of Minnesota’s College of Veterinary Medicine (CVM), experts are working directly with poultry producers to examine today’s challenges and find ways for research and innovation to ensure the continued success of the industry.

An Alternative to Antibiotics

On turkey farms, antibiotics are almost a miracle drug. They can help prevent diseases in a flock, treat what diseases do arise, and promote weight gain in turkeys.

The one downside, however, is a severe one. Antibiotic resistance, where harmful bacteria adapt to survive these treatments, can ravage flocks, threaten farmers’ livelihoods, and even cause problems for human health when people consume meat that contains resistant bacteria.

“Any antibiotic drug used at any time in animals or humans has the potential to drive the development of resistance,” said Tim Johnson, PhD, associate professor of veterinary and biomedical sciences at CVM. “It varies a lot from drug to drug and bacteria to bacteria, but we certainly know that resistance will develop when you use drugs for an extended period of time.”

An antibiotic alternative, Johnson’s research shows, may center on finding the right way to populate a turkey’s microbiome—the assortment of bacteria (and other microbes, like fungi and viruses) that live on and within it. Differences in the microbiome can help explain why one turkey exposed to disease becomes sick, while another does not.

In the wild, turkeys “pick up” their first bacteria from the shells of their eggs as they hatch. In a commercial setting, however, eggs are often disinfected and kept clean, depriving birds of this initial exposure. Johnson and his research team studied which assortments of bacteria healthy turkeys tend to carry and used that knowledge to develop a probiotic: a cocktail of “healthy” bacteria that farmers could give turkeys as soon as they hatch.

“Our goal would be to get that probiotic to that bird as early as possible,” he said. “The sooner you can stimulate the development of a healthy gut microbiome in a bird, the sooner you can ward off potential pathogens like E. coli.” 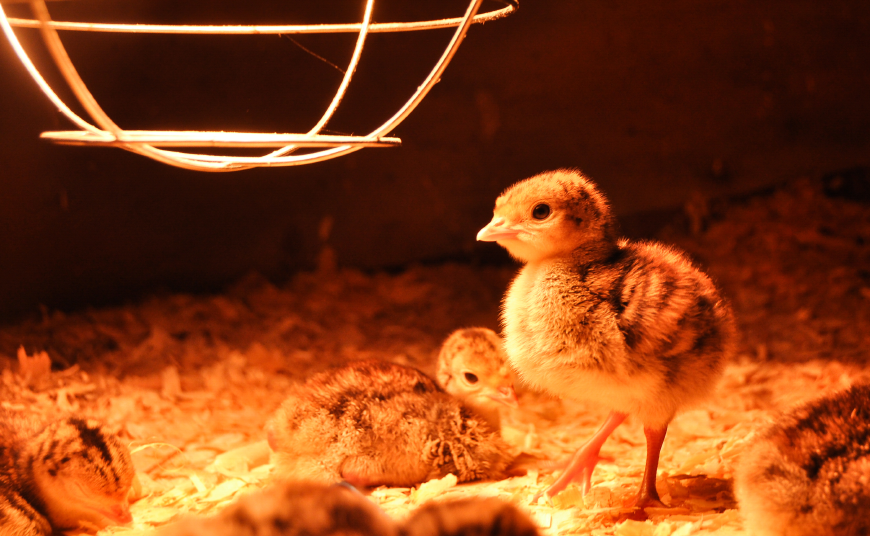 The right microbiome for a turkey depends on a plethora of factors, from the pathogens common in that geographic area to the barn environment in which turkeys are raised. The probiotic would need to be tweaked, Johnson said, based on these conditions. While the treatment will not be a full replacement for antibiotics anytime soon, it can accomplish many of the same goals and help lower farmers’ dependence on antibiotics.

“What we’re seeing with more customized approaches like the one we worked on in this project is you get closer to reproducing many of the good effects of an antibiotic,” he said. “There’s good evidence out there that as you reduce antibiotic use overtime, eventually resistance will go down slightly, or in some cases, substantially.”

The methodology behind the probiotic treatment is now in the process of being patented. Johnson is now working with a company interested in commercializing the technique, which could lead to a product that directly helps turkey farmers in the near future.

“From the perspective of serving Minnesota and helping the industries of Minnesota, this has been a very satisfying endeavor for me,” he said. “It has enabled me to collaborate with turkey producers, get to know them, and work with them to solve some real-life problems.”

Preparing for an Outbreak

Antibiotic resistance isn’t the only threat facing Minnesota’s turkeys. In 2015, the state saw firsthand the devastation that avian flu can bring, enduring nearly $650 million in losses from poultry production and related businesses, according to an analysis by U of M Extension.

Among the U of M experts conducting research into avian influenza is Carol Cardona, DVM, PhD, professor and Pomeroy Endowed Chair in Avian Health in CVM. Cardona researches the transmission of disease and how producers can avoid it through biosecurity measures, which separate healthy birds from the source of infection to better protect the state’s turkeys, and their farmers’ livelihoods, in the event of another outbreak.

“This is much like the steps we take to protect ourselves when people have colds,” Cardona said. “We encourage those who are infected to stay home and then to cover their cough.” 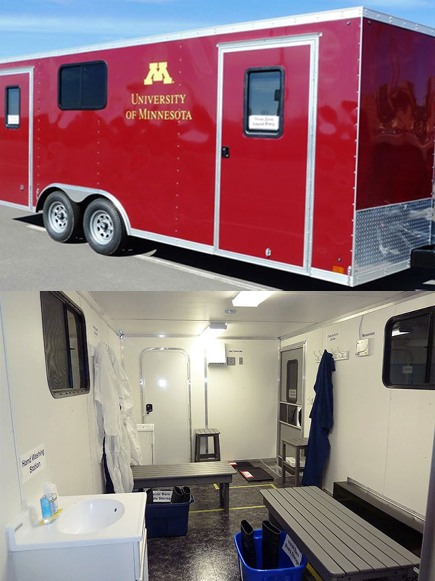 The exterior and interior of the U of M Extension trailer that allows turkey producers to practice the "Danish entry system." Photo: UMN Extension

One example of a biosecurity measure is the “Danish entry system.” Most turkey farms have multiple barns, providing several separate points through which infection can reach a flock. Under the Danish entry system, a person sits down on a bench immediately after entering a barn and removes their footwear, along with other “dirty” exterior garments. They then swing around and put on “clean” items on the opposite side. The U of M has an education trailer that lets producers practice this entry system before trying it on their own farms.

Cardona’s avian flu research extends beyond biosecurity measures. In 2012, she developed a new sampling method to help producers detect the disease. Rather than sampling a few birds at random, her method involves taking a single sample at the water source where many birds drink, effectively testing 50 or 60 birds at once. During an outbreak, turkeys must be cleared before they can move to market.

Strong collaborations with industry are helping researchers prepare for the next possible outbreak. U experts meet monthly with the poultry industry to get ahead of emerging problems and make informed decisions.

“Regulators, academics, and industry need to work together because each of us only knows some piece of the puzzle,” Cardona said. “Together we can understand the whole thing.”