Psychology of Fear: How Anxiety Turns the Everyday into a Threat

Fear and anxiety may not be anyone’s favorite emotions, but these powerful sensations go a long way in keeping us safe. If the dog down the street bites you, the fear that results when you next see the dog will help you avoid another bite.

But what about when the response goes too far? If you instead come to fear all dogs, not just the one that bit you, that fear might drastically change where you go and with whom you spend time, becoming a detriment, not a benefit.

This phenomenon—where fear changes how we act when there is no imminent threat—is what interests Shmuel Lissek, PhD, associate professor of psychology in the College of Liberal Arts. Lissek leads the Anxiety Neuroscience Grounded in cross-Species Translation (ANGST) Lab, which studies what happens in the human brain and body during fear-related learning, memory, and decision making. His team’s research can help reveal where psychological states like fear and anxiety “happen” inside our brain and help shed light on how to treat those who suffer from anxiety disorders, including post-traumatic stress disorder (PTSD).

“When I was in graduate school, I became interested in the brain basis of psychological states, and some of the most exciting progress was made in fear and anxiety,” Lissek said. “A lot of that work was done in animals, and I wanted to get into looking at the extent to which these findings applied to humans.”

Humans can “learn” new sources of fear and anxiety through a process called Pavlovian conditioning, where adverse or harmful outcomes, especially repeated ones, make us fear cues of those outcomes. The strong emotional response often spurs people to change how they react to their environment to avoid the source of the fear—an adaptive behavior that helps them limit harm in the future.

One way this can become a problem is through the generalization of that fear, which leads people to interpret a fear signal too broadly and begin to avoid nonthreatening stimuli, changing parts of their lives to avoid situations that posed no danger.

Anxiety on the Digital Farm

To understand to what extent people generalize conditioned fear, Lissek and his team developed a computer game. In it, the player controls a farmer who must travel from a shed to the farm field to successfully harvest as many crops as possible. 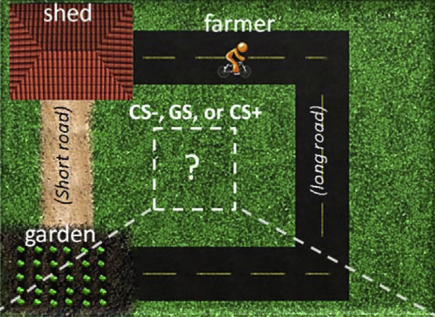 A screenshot of the computer game used to gauge the generalization of conditioned fear. Image courtesy Shmuel Lissek.

For each harvest, the player chooses between two paths. One is the long route, which provides slow and safe travel to the field, but often leaves enough time for a flock of wild birds to gobble up the harvest before the farmer arrives. The other is the short route, which guarantees the farmer will beat the birds to the field, but potentially subjects the player to a mildly painful electric shock.

A player’s desire to win the game conflicts, of course, with their desire to evade electric shocks. The latter aren’t random—symbols (i.e., conditioned stimuli) on the screen show whether a shock will occur if players choose the short route. In Lissek’s study, players who saw the “safe” symbol readily took the short road. When the symbol signaled the “danger cue” warning of an electric shock, they tended to be anxious and adapted to the situation by taking the long route.

Where things became more nuanced, however, was when a safe symbol looked similar to the danger cue in some ways, but was not the same. Despite knowing no shock would come, some players were more likely to generalize this as dangerous and take the long route instead, risking the loss of the harvest. This demonstrates a maladaptive behavior, Lissek said.

“Central to anxiety disorders is the overestimation of threat,” he said. “There are these patterns and biases where people with anxiety disorders tend to catastrophize, or heighten, their estimates of how potent the threat will be, how imminent, and how likely.”

Pinpointing Generalization in the Brain

The data Lissek and his team collected from the game allowed them to create “generalization gradients”—graphs showing to what extent participants treated symbols that in some ways resembled the danger cue, but would not lead to a shock, as hazardous.

“At the time when we were developing this, generalization had never been looked at systematically in the anxiety disorders,” he said. “We were the first to do that using generalization gradients.”

Now, Lissek and his team are using the game with combat veterans to see if it can reliably measure generalization in PTSD, which can create large barriers for veterans in civilian life. A combat soldier hurt when an improvised explosive device hidden in a trash can explodes on the side of a road, for example, may generalize their fear of another blast to all trash cans. Upon returning to the US, that soldier may avoid driving even in their own neighborhood, creating a major obstacle in their day-to-day life.

If successful, the farmer game could be used as a metric for measuring whether treatments for anxiety disorders are working. Scientists can target specific areas of the brain through transcranial magnetic stimulation (which uses magnetic fields to stimulate brain circuits), pharmaceutical therapies, or even brain surgery. The test could also be used to help create future diagnostics for anxiety disorders that rely on brain markers.