Most of the food you eat is made possible by oil and gas. It’s not just that these fuels power the harvesting, transport and electric components used in agriculture. Oil and gas make fertilizers that nurture crops, too.

“We use five trillion cubic feet of gas in the process that makes fertilizers world-wide,” explains Larry Wackett, Ph.D., of the University of Minnesota’s Department of Biochemistry, Molecular Biology and Biophysics. “Without it, we could only feed three billion of the world’s seven billion people. We need to keep using hydrocarbons to meet that demand.”

But gas and oil create numerous environmental and health problems, from global warming to air pollution and water contamination. A recent collaboration among university biotechnologists is breaking new ground in treating the water portion of this challenge.

University researchers are on the cutting edge of a novel process that harnesses natural bacteria to purify water contaminated by hydrofracking—the process of pumping water underground to open up ancient stores of natural gas and oil.

Water used in the hydrofracking process is polluted with some 1,500 hydrocarbons. Currently, the only ways to treat this waste water are to evaporate it, condense the remaining chemicals and landfill them as hazardous waste, or to pump the contaminated water deep underground into injection wells. These approaches are bad for the environment and unsustainable. The process under development at the U of M’s BioTechnology Institute would enable industry to reuse the water and return it to the environment free of contaminants. This is especially important as we face increasing water shortages and in oil-rich but arid zones where water is difficult to obtain.

“The idea,” says university mechanical engineer Alptekin Aksan, Ph.D., “is to borrow the water, use it in the industrial process, clean it and return it in the state you found it.”

Aksan and Wackett, both part of the BioTechnology Institute, are collaborating on the project. Wackett specializes in biodegradation and bioremediation. He explores the processes by which living matter breaks down and how those natural systems can be employed to clean up waste products. Aksan specializes in biostabilization. He studies methods of preserving proteins, living cells and tissues through processes such as cooling, drying and the development of synthetic organic biomaterial devices.

Mention bacteria, and most people think of germs and disease. “But,” says Wackett, “in fact there are only a handful of disease-causing bacteria as compared to millions that do good in the environment. Some are in the soil and water and chew up organic material naturally, including oil and industrial chemicals.”

For example, bacteria helped clean up the oil spilled in the Deepwater Horizon disaster of 2010. “Some of the same oily chemicals in the Deepwater spill are present in the produced water derived from oil and gas hydrofracking,” continues Wackett. “We want to take advantage of the natural ability of bacteria to eat these compounds by adding an engineering component. Because we need to treat drilling waters from different locations; we need control over the process.”

Aksan’s lab has developed a process called “bioencapsulation” that captures the tiny oil-munching bacteria within a sponge made of silica, the same material that sand is made of. This sponge is essential to gaining control of the cleaning process. Aksan says, “You can’t just dump these bacteria into the water and hope they’ll take care of the pollutants. You won’t know if they’ll survive, you can’t recapture them, you can’t know if you reach the concentrations needed to efficiently remove the chemicals, and the water continuously dilutes the mix.”

Moreover, degrading the 1,500 types of contaminants that occur in hydrofracking water requires a combination of different types of bacteria. The complexity that occurs as contaminants interact with each other and the bacteria presents many bioengineering problems. The silica sponge or matrix can act as a sort of filter through which polluted water is passed. The bacteria are trapped within spaces in the sponge that are just large enough for the cells to move around without escaping. They break down the contaminants into safe byproducts.

Aksan and Wackett began their collaboration about two-and-a-half years ago. Over lunch one day, they discussed possible connections between their different areas of research. This led to the realization that Wackett’s expertise in biodegradation could be combined with Aksan’s in biostabilization.

Aksan explains, “We saw that we could make engineered systems using the spongy matrix and the bacteria. Our first application was herbicide remediation using genetically modified E. coli bacteria. It was extremely efficient at removing herbicides and pesticides from water over a long duration.” Next they developed the idea of applying the process to water polluted through hydrofracking.

Professor Michael Sadowsky of the BioTechnology Institute and College of Biological Science Dean Robert Elde are part of the project funded by National Science Foundation (NSF). Sadowsky’s role has been to investigate the bacteria found naturally within produced water obtained from hydrofracking. The bacterial populations are very diverse and could provide new bacteria and knowledge to aid the overall goals. Dean Elde’s role in the project is to help advance the commercialization of the research. The Dean has been an active promoter of biotechnology both within and outside the state of Minnesota. 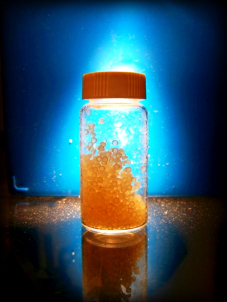 In 2012 the project received grants from the NSF’s Partnerships for Innovation and the Minnesota Futures Award. The scientists working on the project believe there are many applications for the technology. Wackett notes, “Our NSF grant was for cleaning oil and gas contaminants, but we pointed out that this was a platform technology. Depending on what bacteria you use, you can treat contaminated water from many sources, including agricultural runoff, sand mining runoff, and so forth.”

Though the project has been successful in the lab, there is a huge amount of work to be done to scale it up for commercial application. The filtering system must be robust, must withstand temperature extremes from arctic chill to desert heat, must be economical, must be transportable, and must be tolerant of human error in application. Says Aksan, “This is an industrial problem. We are shooting for a post-lab system at larger scale to show that we can clean water in way that can be scaled up. We have a lot of people giving us advice, including university alumni who are getting us in touch with people in the field who can use this product once it is scaled.”

Wackett envisions other applications, such as an absorbent material filled with bacteria that could be spread over chemical spill sites. “Currently, we have to scrape up contaminated soil and put it in a hazardous waste landfill. If this substance could be used to absorb and degrade the pollutants, we could simply spread it on the spill.” After the material had consumed the toxins, it would break down naturally and become part of the soil.

A university team has assembled around various aspects of the project. Others involved include: Jeffrey Beileicki of the Humphrey School of Public Affairs; Lynda Ellis, Laboratory Medicine and Pathology; Steve Heilman, BioTechnology Institute; and Elizabeth Wattenberg, Environmental Health Sciences.

Post by Vincent Hyman, a freelance writer based in St. Paul, Minn.