A Quest to Drill Below Antarctic Ice

The crisp air of fall may have come to Minnesota, but the warmer months are coming soon down in Antarctica—and John Goodge has big summer plans.

Last year, Goodge, Ph.D., professor of earth and environmental sciences at the University of Minnesota Duluth, arrived on Earth’s coldest continent to begin testing a custom-designed drill that could dig deeper into the Antarctic ice sheet than any had before—so deep, in fact, that it would sample the billion-year-old bedrock below it. 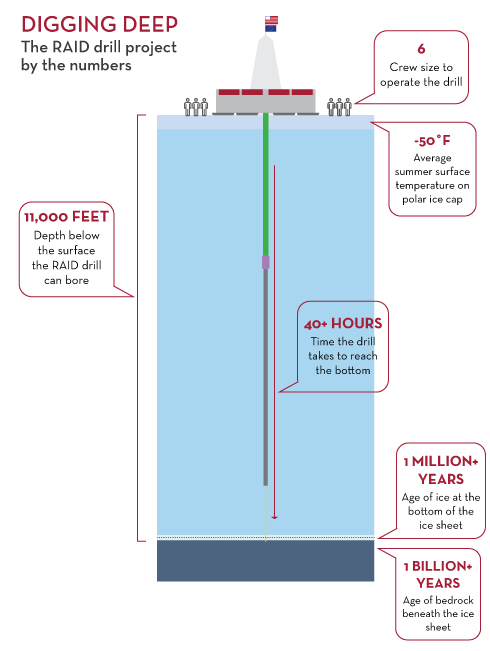 Now, Goodge and project co-leader Jeff Severinghaus, Ph.D., geosciences professor at the Scripps Institution of Oceanography at the University of California, San Diego, are gearing up to conduct a final spate of tests on the drill to clear it for use in research. Their efforts, funded by over $10 million from the National Science Foundation, will give researchers access to never-before-studied ice and rock samples from nearly 11,000 feet below the surface of the ice.

“Our goal will be for the RAID system to venture out to drill multiple holes per season,” Goodge said. “At this point, we have some 40 researchers from lots of different institutions across the US currently involved with RAID or soon to be involved with it. The project will give the scientific community access to a rich record of geological and climatic change.”

Why is it so valuable to drill to the bottom of the ice sheet and below it? The answer depends on who you ask—and what they study.

Biologists, for example, hope to see whether there are microorganisms living in or below the ancient ice, including previously undocumented species. Climatologists, on the other hand, will look to ice cores to learn more about the history of Earth’s climate and create better scientific models of future climate change.

For geologists like Goodge, the rock below the ice could reveal more about how Antarctica used to fit together with other present-day continents to form the massive supercontinents of the past. Drilling will also shed light on the stability of the ice sheet. Is it frozen directly to the bedrock below it, or does it sit atop a layer of water, leaving potential for it to slide into the ocean and raise sea levels? 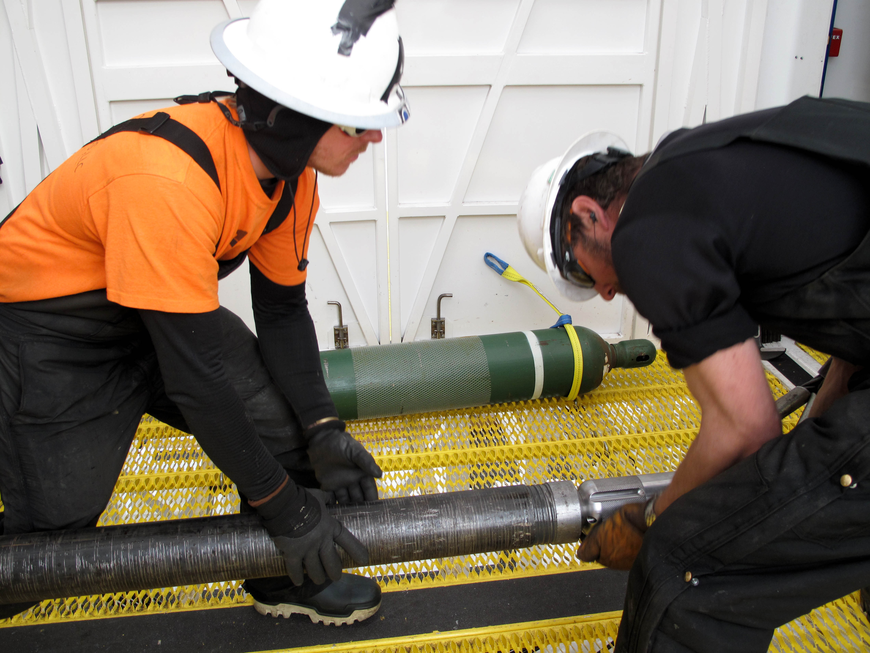 The Road to McMurdo

The RAID drill’s path to this point has been years in the making.

It all began in 2012, when a preliminary round of funding from the National Science Foundation spurred design and feasibility studies. Once the design was established, more NSF funding launched the next phase of the project. Construction began in 2014, with some early testing by the firm that built it taking place in Utah.

Researchers sent the drill on its long journey down to Antarctica in November 2015. The RAID was disassembled and packaged into five separate shipping containers. It arrived at McMurdo Station, located about 2,400 miles south of New Zealand, that January and immediately went into storage to wait out the Antarctic winter.

From February to September, the continent plunges into total darkness. The winter’s extremely low temperatures and high winds create difficult conditions for both people and machinery, so only a small science and maintenance staff stick around US bases during this time.

When the winter receded in late 2016, the team set out to test the drill on real ice. They hit a snag when loosely packed, granular snow (known as “firn”) prevented the drill from forming a pressure seal. Without the seal, drilling fluid couldn’t remove excavated snow and ice from the hole.

“The difficulties were not surprising given that no one has ever done this before,” Goodge said. “We’ve acquired many more augers for drilling through the firn since last time, so hopefully we will punch through it quickly during our upcoming field tests.” 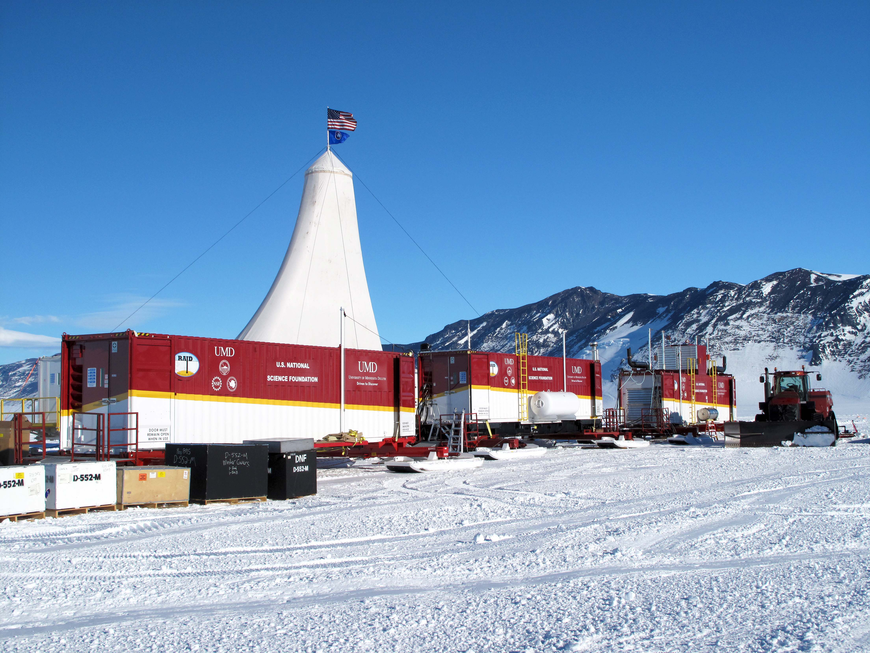 The RAID drill, set up at the test drilling site. Photo: John Goodge.

The ultimate goal of the RAID project is to haul the drill out from US Antarctic bases (such as McMurdo and the South Pole Station) to drill several holes per season on the central ice cap. The team estimates the drill will take more than 40 hours to delve to its deepest point, compared to conventional ice coring, which takes many months over several field seasons.

A team of chief scientists will direct where the drill goes based on input from the scientific community. Using different imaging technologies, such as ice-penetrating radar, the researchers can survey potential drilling sites and ensure those spots give them access to the ice and rock samples they want.

As each hole is completed, research groups will coordinate with the drilling team to either access the samples removed from the drilling site or to study the site itself with instrumentation lowered into the boreholes left behind. If testing goes well this year, Goodge looks forward to reaching that point as soon as late 2019.

Correction: An earlier version of this story incorrectly stated the RAID drill would excavate the Earth's oldest ice. In fact, a Princeton University-led team announced in August the discovery of older ice samples, at 2.7 million years old.