In 2015, researchers in Paul Dauenhauer’s laboratory at the University of Minnesota were exploring new technologies for using biomass—materials derived from organic, renewable sources—to make the same chemical building blocks needed to manufacture plastics, rubber, detergents, and more that are normally derived from fossil fuels.

In the process, they discovered something exciting. One of the plant-based compounds did more than replace its petroleum-based counterpart; it actually worked better.

“We discovered this other variation that gave much better performance,” said Dauenhauer, PhD, professor of chemical engineering and materials science in the College of Science and Engineering. “A performance advantage is a really big deal. We were lucky enough to have this realization as a team, that there was a much bigger target here that we didn’t know about.”

The result was Eosix, a patented method for making nontoxic, sustainably-sourced ingredients called surfactants. Dauenhauer and laboratory member Christoph Krumm—then a doctoral student—cofounded startup company Sironix Renewables in 2016 with help from the Venture Center at UMN Technology Commercialization. Krumm now leads the company as CEO at its headquarters in Seattle.

Eosix is based on two different plant-based components. The first is an agricultural waste product called furans, which the team derives from the sugars that make up two-thirds of the volume of biomass materials. The other component is a natural oil, which can come from a variety of different plants. Deciding exactly which oils to use allows Sironix to optimize Eosix for different uses, Krumm said.

“It’s a whole new technology base from which we can make a variety of surfactant materials beyond just the ones we’re focusing on now,” he said. “There are small tweaks we can make to this technology that enable us to access different market application areas.”

A Holistic Approach to Sustainability

Getting companies to adopt plant-based surfactants is one part of Sironix’s broader efforts to make cleaning and personal care products more sustainable, Krumm said. The company also aims to reduce waste elsewhere in a product’s lifecycle, starting at its manufacturing and continuing through the end of its use.

One example is the surfactant’s ability to make a detergent clean well in cold water, as more than half of the total energy required to do a load of laundry comes from heating the water. Sironix is also exploring ways to limit the amount of material used in detergent packaging. Options for that could include making the liquid detergent more concentrated so it can fit in a smaller plastic bottle or switching to a solid form that requires less material to package.

Now is an opportune time to develop ingredients that are both sustainable and highly effective, Krumm said. On one hand, many eco-friendly brands are struggling to deliver the same level of performance as their counterparts who use traditional chemicals. Larger brands, on the other hand, are pondering how to meet corporate sustainability goals, such as lowering carbon emissions or using more plant-based materials, without sacrificing their products’ effectiveness.

“We’re seeing a lot of interest already in industry to try a new ingredient,” he said. “Now that consumers are also thinking about the ingredients that go into their cleaning products and starting to care about whether they are plant based or not, the demand for plant-based ingredients is much stronger.” 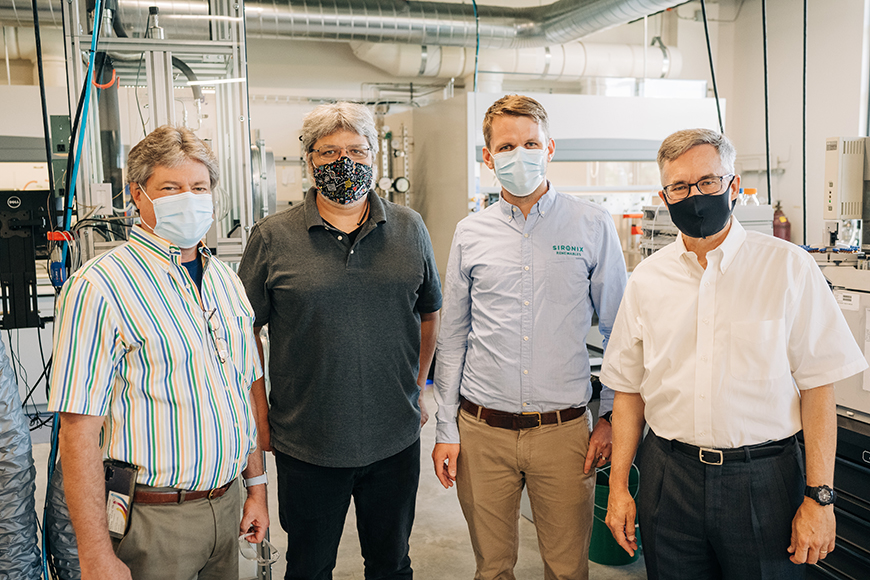 In August, Sironix celebrated the opening of a new development facility. The 3,700-square-foot space, supported through funding from the UMN Discovery Capital Investment Program and angel investors, will allow the company to scale up its manufacturing to produce hundreds of kilograms of surfactants a year, making the ingredient more appealing to companies interested in testing it in their products.

The new facility will also serve as a research space for further developing the company’s existing surfactant technology while exploring how to repurpose it for use in other markets. Making small tweaks to the technology—such as by swapping out coconut oil as a source component in favor of soybean oil or algae oil—can make the ingredient perform differently in products. The ability to adjust, for example, how much the surfactant foams or how gentle it is on skin, can dial it in for use in products like adhesives, agriculture chemicals, hand soaps, paints, and spray coatings.

Sironix will even formulate some of its own test products in the new space as a way to demonstrate the effectiveness of its surfactants, Krumm said.

“We can do the applications testing and work with brands more directly to show them the potential for this technology,” he said. “It gives us an opportunity to showcase what we’re capable of.”

The research to discover the new class of biorenewable oleo-furan sulfonate (OFS) surfactants described in this story was originally funded by the US Department of Energy.