The common carp, an invasive species now prevalent in Minnesota, has been a destructive force in the state’s many lakes since it was first introduced about a hundred years ago.

Now, a University of Minnesota startup is bringing a new approach to bear in the fight against common carp. Carp Solutions, which launched in February, uses the results from U research conducted over the past decade to provide a comprehensive assessment of carp populations and recommend methods for how best to limit their populations in bodies of water across the state. The company is led by Przemyslaw Bajer, Ph.D., assistant professor of fisheries, wildlife and conservation biology with the U’s College of Food, Agricultural and Natural Resource Sciences, who has been conducting carp research in Minnesota since 2006.

“After years of research into carp population dynamics, we now have new knowledge that can serve as a powerful tool for fighting this invasive species,” said Bajer, CEO of Carp Solutions. “Carp Solutions puts that knowledge to use to aid statewide efforts toward reducing the destructive effects of carp and restoring our lakes to their natural state.”

According to the Minnesota Department of Natural Resources, common carp are one of the most damaging aquatic invasive species and are present in hundreds of waters in the southern two-thirds of the state, with less prevalence in the northern third. The carp are voracious eaters that consume insects along the bottom of lakes. As they feed, they stir up sediments and uproot aquatic vegetation, ultimately killing all of the plants that improve water clarity and also provide an important source of food and habitat for native fish and waterfowl. Additionally, as the carp forage at the bottom of the lake, they release nutrients in their waste into the water, which harms water quality by causing higher phosphorus levels that help green algae to form.

Common carp are a different species from Asian carp, which is a collective term for several species of carp that are also invasive but have only arrived in Minnesota much more recently and have not reached many of the state’s bodies of water. Asian carp are a threat because they out-compete other fish for food and space, jump out of the water to injure boaters and may lower water quality, according to the National Park Service.

Researchers have studied ways to control common carp populations since the 1930s, but early efforts did not examine where the carp’s young were coming from. The assumption was that carp laid eggs in the same areas where they were typically found as adults. When Bajer began researching the issue in 2006, he implanted radio transmitters into the fish to better understand their movements to and from spawning sites. He also tracked the number of carp and carp eggs and their survival in the areas where the fish were found.

Through his research, Bajer realized that Minnesota, with its multitude of lakes and interconnected waterways, is an ideal geographic area for carp to thrive. He found that many carp huddle near the bottom of the deeper lakes to survive the winter freeze, but later leave the lakes and swim to shallow marshes to plant their eggs. While shallow bodies of water normally harbor large quantities of native fish, like bluegills, that eat carp eggs and larvae that are attached to vegetation, longer periods of thick ice that occur during severe winters hinder the oxygen normally gathered from above the surface and from photosynthesis in aquatic plants. Low oxygen content kills all the fish in these waters. These severe winters come years apart, but with no native fish around to threaten their young after the thaw, they still allow female carp to safely produce hundreds of young. 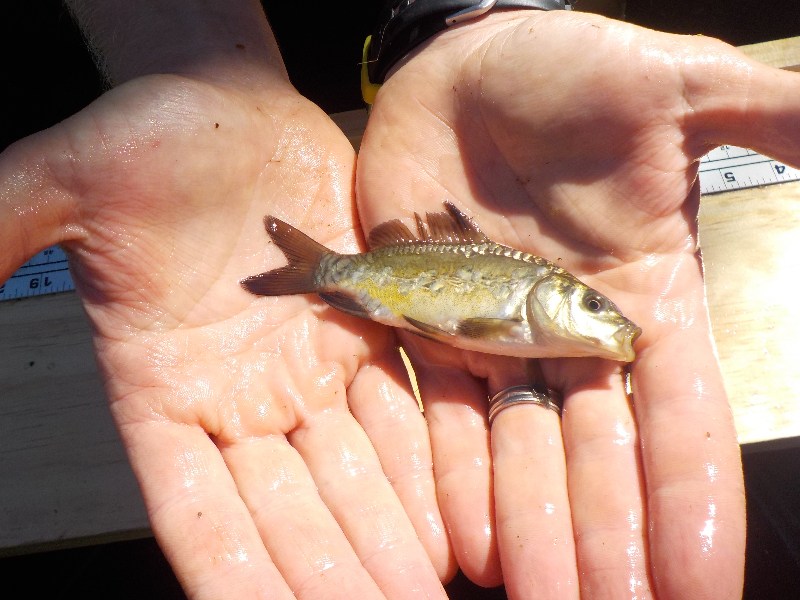 Jordan Wein, general manager of Carp Solutions, holds a very young mirror carp, a type of common carp not entirely covered with scales, that was caught in a trap net. 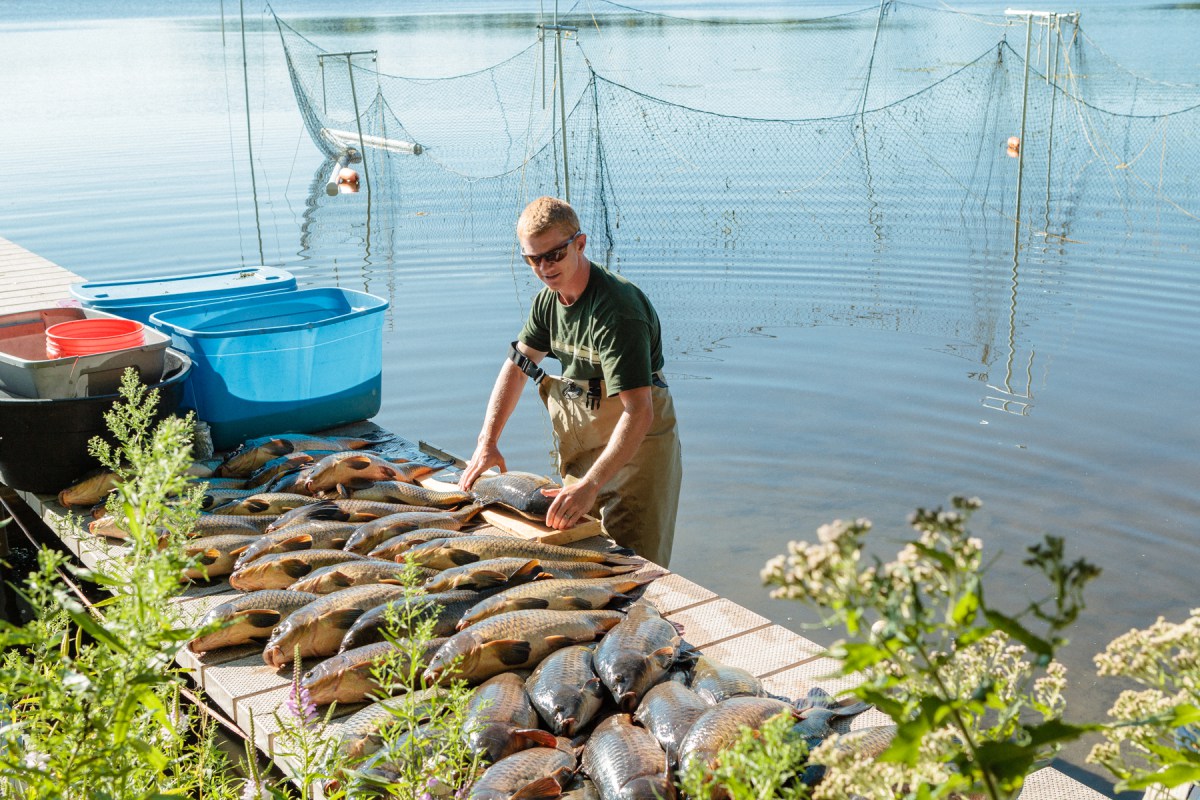 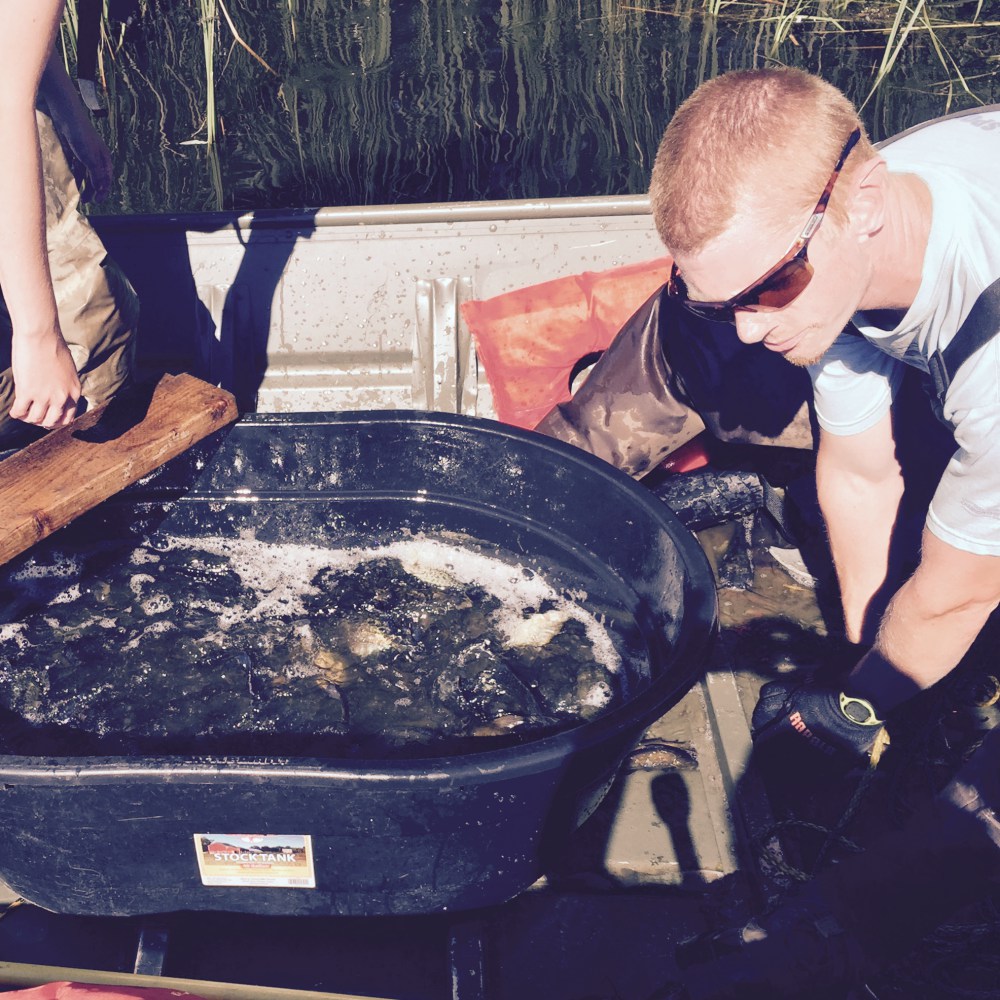 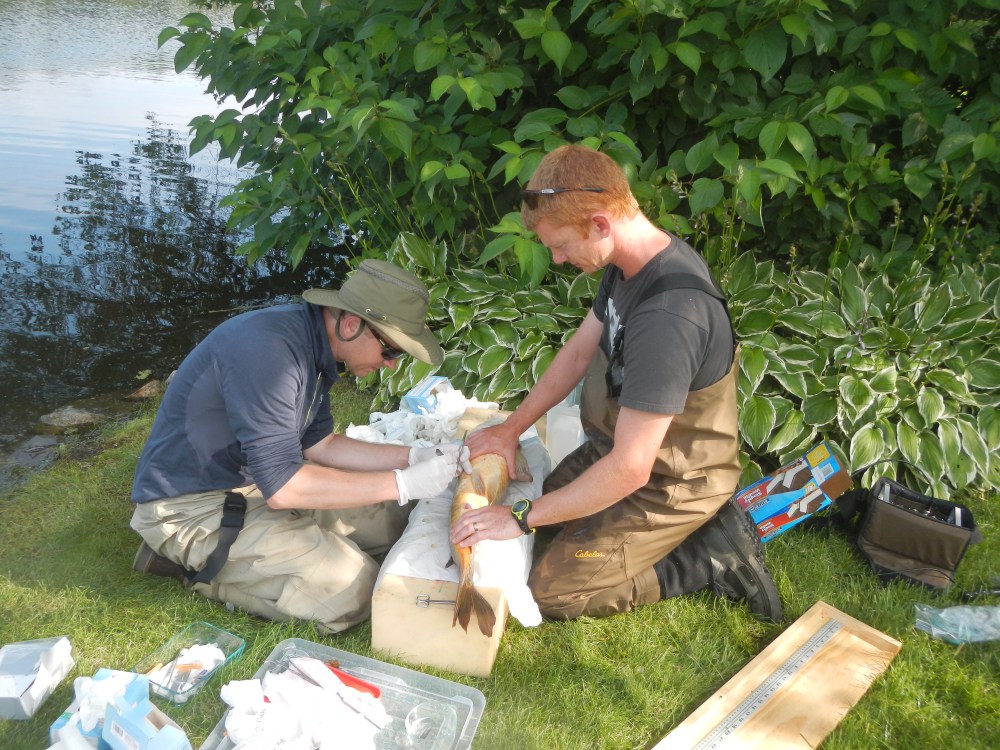 Carp Solutions will use a combination of existing knowledge about carp populations in Minnesota and information gathered from on-site surveys to provide services to watershed districts, park districts and other organizations with an interest in improving water quality and controlling aquatic invasive species. The company also focuses on training local personnel about specific methods and approaches they can use to manage and oversee carp populations.

To start, Carp Solutions gathers estimates on how many carp are in a given chain of lakes to see if it exceeds a well-established “safe” level of carp biomass — approximately 100 pounds per acre. While completely eradicating common carp is extremely difficult, reducing carp biomass to a third or a fourth of their current status is often sufficient to eliminate their negative effects on lakes. The company then collects routine information on the movements of the carp, especially the young, and trains local personnel to collect such data. This information can help them track where the fish are spawning and where they gather during the winter.

The company then recommends how best to deal with the carp problem using a variety of available methods. One example is aeration, where air is pumped or churned into the water to raise its oxygen content during winters. Higher oxygen levels, Bajer said, help keep the native fish alive during severe winters so they can eat carp eggs and limit the population of the next generation of carp. This process may only be necessary once every couple of years, depending on the lake.

Another method the company may recommend involves implanting a few carp with radio transmitters and releasing them back into the water. The transmitters reveal where in a lake the carp huddle together during the winter, allowing for the location and removal of large numbers of carp using specialized seine nets. A similar method involves “training” carp to gather in certain areas of the lake using specific types of bait that only carp eat. The bait is located within a trap that lays flat on the bottom of the lake, but quickly forms into a box when lifted to trap the carp inside. While a baited box trap catches fewer fish, it holds an advantage over a seine net because the carp are much less likely to escape. Carp are fast learners, and will be much more difficult to capture if they successfully avoid being caught once, Bajer said.

Carp Solutions currently has three ongoing projects, and the company aims to help more organizations across Minnesota in controlling invasive carp as it grows. Bajer said combating invasive species will be key to preserving many lake ecosystems across the state.

“Carp are a much greater threat now than they used to be,” he said. “As common carp continue to inhabit our lakes and we brace ourselves for the arrival of new invasive species, like Asian carp, it is important to use the information at our disposal to work against these threats to Minnesota’s environment.”