As athletes and soldiers know all too well, repeated head injuries can cause traumatic brain injury (TBI) and lead to neurodegenerative disease, or dementia. In the United States, 1.6–3.8 million TBIs occur every year, and an estimated 5.3 million Americans are living with a disability stemming from a TBI.

But no neurons need be torn open or crushed to cause this damage. They need only be stretched, a new University of Minnesota study shows. The study found that stretching induces the same damage to cells as occurs in chronic traumatic encephalopathy (CTE) and Alzheimer’s disease.

The work sets the stage for quickly screening drugs or other treatments targeting the root cause of injury-induced brain trauma. If administered promptly, such a treatment could prevent or limit the damage following a concussion, whether from blows or the percussive shock waves of explosions.

“Our study provides the first direct experimental evidence that mechanical deformation on the scale of individual cells can lead to some specific abnormalities associated with Alzheimer’s disease and CTE,” said co-author Patrick Alford, PhD, an associate professor of biomedical engineering in the College of Science and Engineering.

“The mathematical models we developed based on these data suggest that we can predict injury likelihood due to forces like those caused by blast waves experienced by soldiers. This could be quite useful for guiding the future design of protective gear for soldiers and athletes, and act as a starting point for the development of therapies.”

The study is published in the Proceedings of the National Academy of Sciences.

Trials and Tribulations of Tau

Neurons consist of three parts: the cell body, where the nucleus resides; highly branched extensions called dendrites, which receive incoming messages; and (almost always) a single tubular axon, which carries outgoing messages. Typically, the terminal end of an axon breaks up into branches that impinge on neighboring neurons. Information is passed when molecules of a chemical messenger—a neurotransmitter—pass from the axon of one neuron into a dendrite of another across a narrow gap called a synapse.

Running lengthwise inside each axon like a backbone are long “microtubules”—polymers of a protein called, appropriately, tubulin. The brain protein tau helps maintain the spacing between microtubules and keep them from falling apart.

But in brain traumas like CTE and Alzheimer’s disease, molecules of tau have become dislodged from their axons and relocated to the cell body and dendrites, especially in outgrowths of the dendrites called spines, which receive many incoming messages.

Crucially, somewhere along the line these wayward tau molecules encounter enzymes that convert them into the abnormal p-tau form. It is p-tau that migrates into the spines, where it jams incoming signal reception and/or processing.

The researchers removed neurons from the hippocampus region of newborn rats and placed them on a stretchable membrane. When they stretched the membrane to simulate the forces of sports collisions and concussive explosions, the neurons responded by producing the same signs as occur in real-world injuries: Tau had been converted to p-tau and migrated into dendritic spines.

The mislocation of p-tau resulted from either a single large mechanical injury or a series of less severe injuries. P-tau also weakened the electrical activity triggered in a dendrite or spine by the arrival of neurotransmitters across a synapse.

“The weak electrical activity in stretched neurons would, in the brain, severely impair their ability to communicate with other neurons,” said co-author Dezhi Liao, PhD, an associate professor of neuroscience in the Medical School. “If such damage is severe enough or occurs frequently enough, it turns up as some form of dementia.” 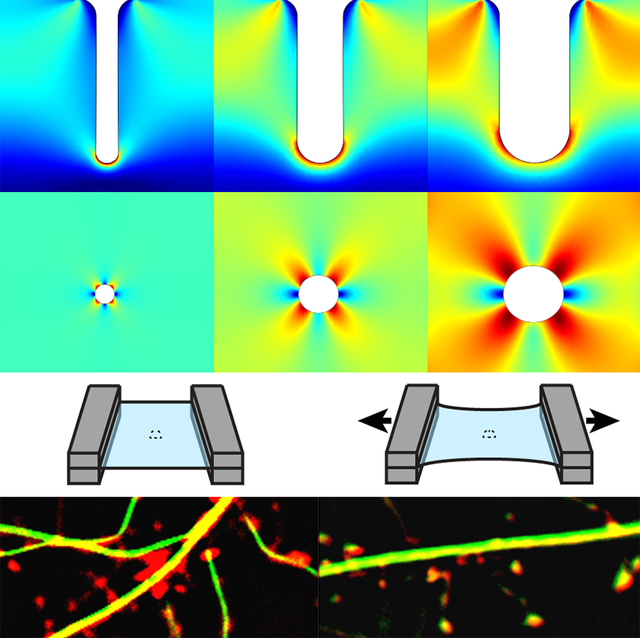 Top row: A schematic showing worst injury (red) in the depths of the creases (sulci) between folds of the cerebral cortex. Second row: Schematic showing areas of injury around a blood vessel in cross-section. Third row: Schematic of the neuron-stretching apparatus. Bottom row: Actual neurons dyed to show areas where abnormal tau protein has migrated to dendritic spines.

Using sophisticated modeling, the researchers found that tangled strands of p-tau that turn up early in CTE brains are located in regions that were most stretched during injury. Those regions were deep in the grooves (sulci) between folds of the cerebral cortex and in regions surrounding blood vessels.

Further experiments showed the damage could be largely prevented by chemically inhibiting the enzymes that generate p-tau or by “knocking out” the gene for tau.

“The tau mislocalization and associated functional deficits here are caused by mechanical stretching within days,” said Liao. “This probably contributes to the acute pathophysiological changes in healthy athletes and soldiers who suffer from brain injuries. Most of them do not develop CTE; the hallmark of CTE is tau pathologies in broad regions of the brain over decades.

“Therefore, we plan to utilize our mechanical paradigms in animal models to test whether the acute tau-mediated synaptic deficits will lead to permanent brain impairments, and if so, by what mechanisms.

“Another research direction is to search for drugs that can block the tau mislocalization to dendritic spines. Candidate compounds will be tested first in our cellular model and then in TBI animal models. The in vitro stretching model here provides a unique tool for fast drug screening.”