Studying Lake Levels for Insights on a Changing Climate

Last summer, Alejandro Fernandez and his colleagues Ali Wiemer and Collin Murphy hoisted coring equipment and an assortment of other gear onto their backs and hiked out to remote lakes in eastern Washington State. The University of Minnesota Duluth students spent days taking water samples, measuring depth, and extracting sediment cores that, when combined, measured up to 25 feet long.

“You go out on the lake on the little inflatable rafts that we have and you build the setup to collect the cores,” Fernandez said. “It’s really fun, even though it’s a lot of physical work.”

Fernandez, Wiemer, and Murphy, Earth Science master’s students in the Swenson College of Science and Engineering, are studying the lakes in Washington State’s Okanogan River basin to reconstruct a history of changes in water levels. The team, led by Associate Professor Byron Steinman, PhD, a McKnight Land-Grant Professor and member of UMD’s Large Lakes Observatory, aims to use their findings to tell a larger story about the lakes themselves and predict how they might react to future climate change.

A lake’s water level depends primarily on two competing forces, Steinman said: precipitation (from rain and snow melt) and evaporation. More extreme weather, such as frequent droughts, can throw these forces out of balance, especially in areas that are particularly sensitive to climate change.

The Okanogan River basin is one such sensitive area—and that’s why Steinman has chosen to focus on the lakes of the area. The climate tends to be very dry and precipitation levels vary widely from year to year. As lakes are heavily intertwined with the region’s groundwater supply and other parts of the water cycle, Steinman said low lake levels could spell trouble for area farmers who rely on the water supply to grow their crops. 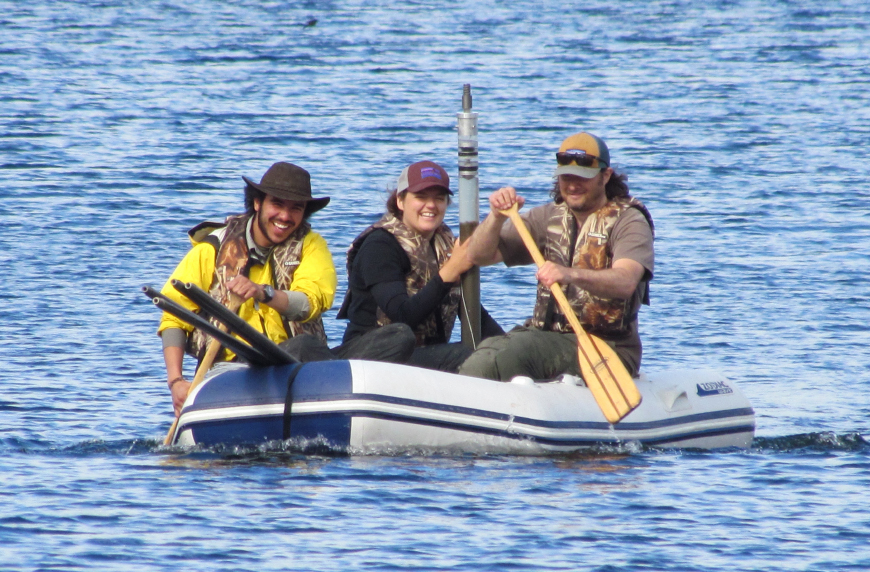 Alejandro Fernandez, Ali Wiemer, and Byron Steinman paddle on a raft in June 2019 after extracting a sediment core from a lake in Washington State. Photo credit: UMD/Large Lakes Observatory.

To understand the connection between climate and lake level, Steinman and his team need climate data. Official weather records only go back about 100 years, providing too little information, but sediment samples reach much further back in time. By studying the chemical makeup of these samples, some as old as 15,000 years, the researchers can find evidence that indicates what the climate was like across a long stretch of time, and how wet or dry the lake might have been as a result.

“We use this to make inferences about what was going on in the lake the moment those sediments were deposited,” Fernandez said. “The more information you have, the clearer picture you can create.”

That picture proves useful for more than just the Okanogan River basin. Steinman and other paleoclimatologists—scientists who study past climates—are working to combine such data from lakes all over the continent to develop a more comprehensive view of lake levels than scientists have ever had before. The goal is to understand how widely the supply of freshwater resources has varied in the past and develop an idea for what to expect in the future.

“It’s interesting to have a much longer timescale perspective on how these systems work,” said Steinman, who has been conducting research in the area for 15 years. “It’s directly useful for that particular region in terms of providing some perspective on past changes in climate, but also it all will fit into a much larger, continental-scale perspective.”

Putting Numbers to It

To take his understanding of how lakes react to climate one step further, Fernandez has been working on a computer model. Using the model, he can quantify the effects of a change in climate, putting numbers in place that help scientists more precisely envision the lake level in the past and understand how it might change in the future.

Fernandez can use the current chemical makeup of the sediment and the equations in his model to gauge the impact of a future time when, for example, the temperature is one degree Celsius higher and precipitation is lower. The model provides a reading on how much the lake level could rise or fall as a result.

Quantifying records using models like Fernandez’s is a technique at the edge of the field right now, Steinman said, and something many scientists are starting to work on. Such efforts could help translate sediment measurements into projections that inform how watershed managers and other decision makers look at land use and water sustainability in their regions. 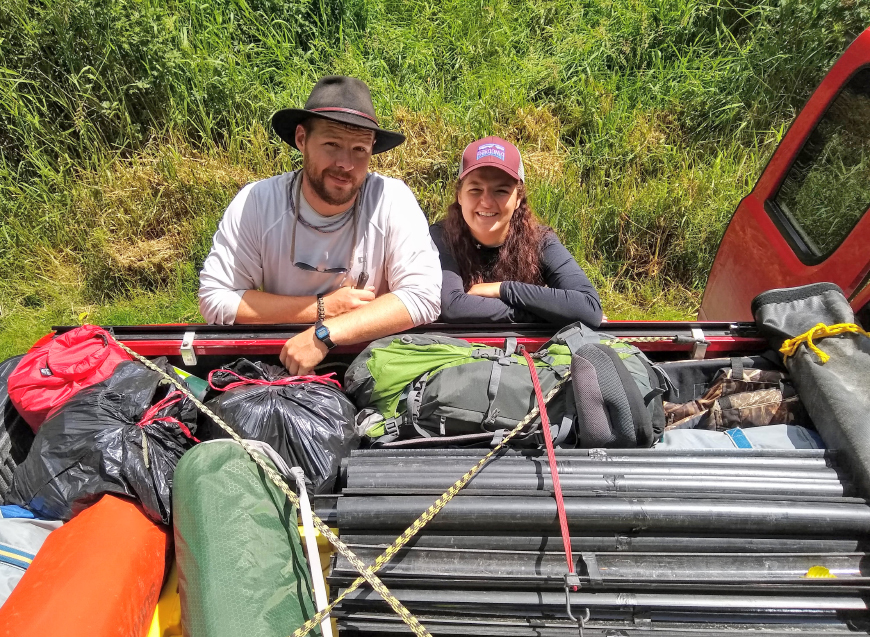 Looking forward, Fernandez aims to continue refining the computer model by comparing its results against known climate data as well as testing its effectiveness at modeling the behavior of other lakes. His excitement for the way geological sciences can help prepare society for the future, which led him to graduate school at UMD in the first place, has inspired him to continue his studies as a PhD student.

“I wanted to work here on this research with Dr. Steinman because I’m passionate about the whole climate change issue,” he said. “If we understand how water resources behave or react to a change in climate, we can better prepare for future climate change.”

For Steinman, his graduate students’ enthusiasm is part of what energizes him to continue his long-term field research in Washington State.

“It keeps my perspective fresh, how excited they get about the natural settings we’re working in,” Steinman said. “Working with them motivates me. It makes the whole thing worthwhile.”

Kevin is a communications specialist with the Office of the Vice President for Research.

The new microscope uses a system of pinholes to remove out-of-focus light and provide researchers with better definition and higher-quality images.

Reimagining How to Provide County Services in the Time of COVID

Research by UMN Extension experts shows how the virus disrupted livestock-based agriculture across the state and the impact on farmers and communities.