When Aleh Manchuliantsau conceived of a way to turn the “waste” material from sunflower oil production into a nutritious, sustainable snack, he knew the idea would need to be tested—and industry advisers told him the University of Minnesota was the place to do it.

Manchuliantsau, founder and CEO of food startup Planetarians, came to the U’s Joseph J. Warthesen Food Processing Center, also known as the “Pilot Plant,” to develop his new production method. The specialized equipment and knowledgeable staff at the Pilot Plant, which is part of the College of Food, Agricultural, and Natural Resource Sciences, allowed him to run feasibility tests that brought his high-protein, high-fiber sunflower chips closer to market.

“As a food entrepreneur, the Pilot Plant was a holy grail to me,” he said. “There’s such a large amount of equipment sitting in one location. I was astonished by the fact that whenever I asked, ‘Do we have this?’ the answer was ‘Sure.’”

Manchuliantsau’s interest in creating new, healthy foods stemmed from a desire to eat more nutritiously outside of the home, when cooking isn’t an option. He first thought of using typical high-protein health food ingredients, like isolated soy protein, but realized that such ingredients not only cost a lot, but also cut out an important benefit of many plant-based foods: fiber.

While isolated proteins are expensive, oilcakes—the dry material left over after manufactures press out the oil from plant seeds—are cheap. Sunflower oilcakes, specifically, have more protein by volume than beef or chicken. Manchuliantsau starting thinking about how to take this potential food source and “upcycle” it—turn it from a waste product into something useful.

“Why should we isolate the protein and again waste what’s left?” he said. “The second part of the oilcake is fiber. We thought, ‘What if we keep both the protein and the fiber?’”

That thought helped Manchuliantsau come up with an idea to solve the main obstacle with oilcakes: their woodchip-like hardness made them impossible to eat as-is. By exposing it to high pressure and high heat through a controlled steam explosion, however, he believed he could “puff” the oilcakes into a crunchy snack.

The benefits of this idea promised to be more than just economical. According to Planetarians, repurposing the more than 330 million metric tons of oilcakes produced in 2017 alone could provide an environmentally friendly way to feed up to 1.5 billion more people, without the need to grow extra crops.

The next step was putting the steam explosion method to the test.

In April and May of 2017, Manchuliantsau and Anastasia Tkacheva, Planetarians’ chief mixologist, set up shop at the U’s Pilot Plant. While the facility provides a wide assortment of specialized equipment for the purpose of advancing food product research and teaching at the U, its capabilities can also help food companies, from startups to industry leaders, develop new processes or product lines.

The first task was ensuring that a steam explosion, which could be triggered using the Pilot Plant’s extruder machine, would “puff” the snack as hoped. That worked, so Manchuliantsau and Tkacheva began to check other questions off their list.

Did the nutrients survive in the sunflower chip after the steam explosion, or were they “cooked” out? Did the chip contain the right amino acids for good nutrition? Was the process economical? One after another, the tests turned up positive.

With the basics figured out, they moved on to analyzing the texture of the snack, using the Pilot Plant to test starches, like potato and tapioca, to see if these ingredients would improve the chip’s crunchy texture without sacrificing nutrition. Flavor testing followed, with the team working to narrow 72 different seasoning options, including more than a dozen variations on barbecue alone, down to just a few flavors.

By the end of the two months, the Pilot Plant testing had helped Manchuliantsau set his sights on moving Planetarians’ sunflower chips to market. 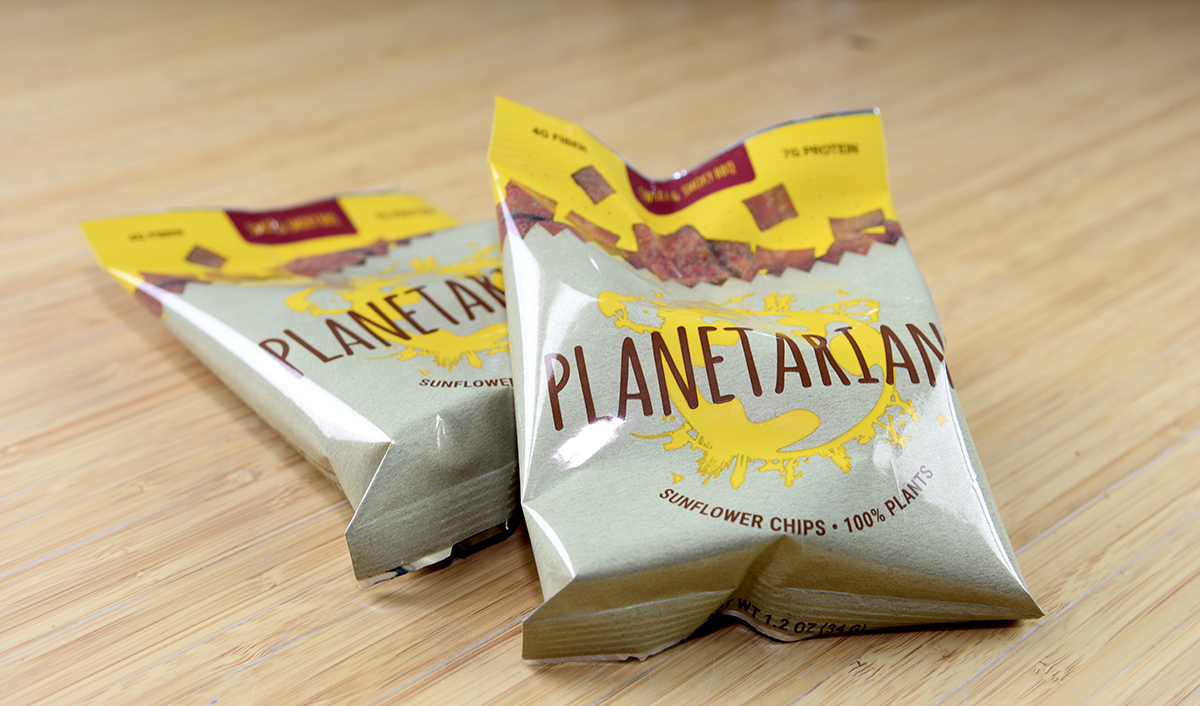 Office of the Vice President for Research

After collaborating with the Pilot Plant, Manchuliantsau hit the road, traveling across the US to gather feedback from potential customers. Many approved of the snack’s focus on nutrition and sustainability, he said, while others were pleased that the snack contains none of the eight most common food allergens, as designated by the FDA.

Today, the startup is manufacturing its sunflower chips a few hours outside of the Twin Cities from Minnesota-sourced ingredients. The company recently launched a round of seed investment to support the manufacturing effort and continue research and development. Manchuliantsau and Tkacheva hope to explore new flavors for the sunflower chips and also to create new foods, such as flours or purees, from the same upcycled oilcake ingredient.

With more than $35,000 in revenue so far from Amazon sales alone and plans to reach grocery store shelves soon, Manchuliantsau is optimistic about what’s next for the company.

“Our biggest goal to prove with our sales was that customers are ready to buy better-for-you products and consider upcycling the food waste as a benefit,” he said. “We have the technology, we have the ingredients, and we know that customers like it.”