It was clear early on that Shawn Wilhelm’s design for a new, highly efficient hydraulic pump had a lot of market potential. Hydraulic pumps are machines widely used in industrial settings to move liquids from one place to another. The only problem for Wilhelm, a mechanical engineering PhD student in the University of Minnesota’s College of Science and Engineering, was that business wasn’t his forte.

That all changed with Minnesota Innovation Corps (MIN-Corps), a U of M program geared toward taking the mystery out of commercializing technology by guiding students and researchers through the process. In June 2014, the National Science Foundation awarded the U an I-Corps site grant to support the program. MIN-Corps is one way the U cultivates an atmosphere that encourages students to pursue opportunities in innovation.

For Wilhelm, it began last fall when enrolled in the 14-week STARTUP course, a component of MIN-Corps. STARTUP features a hands-on curriculum that places students face-to-face with potential customers to test how well their invention meets its target audience’s expectations. Each student or group of students has access to seed money for prototyping and industry mentors to help them get started.

The STARTUP course helped Wilhelm refine his hydraulic pump for the market and make it appeal to a broader audience. Wilhelm originally held efficiency paramount in his pump design. A typical pump is less efficient when handling a smaller fluid load, but Wilhelm’s design retains the higher efficiency with a small load that it has with large output jobs. That, Wilhelm estimated, meant an average pump would use about 40 percent less energy to run.

During the STARTUP course, however, efficiency turned out not to be potential buyers’ only priority.

“When we talked to people, there were other characteristics that were more important,” he said. “It’s really important to step out of your engineering shoes and just start listening to customers’ needs.”

Wilhelm learned customers prioritize a highly reliable pump, because if one breaks it can cost a company thousands of dollars an hour. They also valued a smooth liquid flow, instead of one that pulses the way the heart pumps blood through the body.

In the end, Wilhelm’s participation in STARTUP gave him better perspective on what customers’ priorities were and how to design a more marketable product. He even changed the pump’s intended application from use in excavation to transporting highly pressurize fluids. The high-efficiency pump will serve as a “platform technology,” meaning it has the potential to be used in many different industries and can make a wide impact on the state of industry. 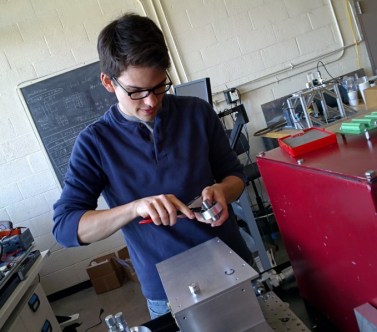 Wilhelm installs a retaining ring on one of the main pump linkages to hold a bearing in place.

A look inside the original prototype, with the some exterior plates removed. Wilhelm holds the adjustment link, which controls the pump’s output. 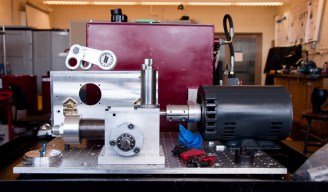 An array of components collected on the test table, including the original pump in the foreground. Behind it, a linkage assembly rests on top of the new pump. The improved model is five times more powerful than the electric motor (right) used to run tests.

Soon after the STARTUP class ended, Wilhelm found out about an opportunity through the U of M’s MnDRIVE (Minnesota’s Discovery, Research and InnoVation Economy) program, an $18 million annual grant from the state Legislature to promote research in key Minnesota industries. He applied for funding through MnDRIVE’s Robotics, Sensors and Advanced Manufacturing competitive entrepreneurship program, where he outlined future plans for his pump idea. He met with a review board in February to answer follow-up questions, and a few weeks later, the news came: He had been awarded $50,000 to continue his project.

John Stavig, professional director with the Gary S. Holmes Center for Entrepreneurship, said Wilhelm’s project was a good candidate for a MnDRIVE grant because it offered an eco-friendly way to improve industrial operations in Minnesota.

“It’s a high-potential opportunity,” said Stavig. “The pump allows potentially billions of dollars in energy savings in certain industrial settings, along with very significant environmental benefits from the reduced emissions.”

Using the MnDRIVE funds, Wilhelm hopes to develop another prototype that further proves his invention’s capabilities, then work with the U to start a company and market his technology.