The “Common Rule,” also known as the Federal Policy for the Protection of Human Subjects, is the common ethical standard for publicly funded research in the United States. Changes to the Common Rule were issued by the Department of Health and Human Services (HHS) in January 2017. Most changes will go into effect on January 21, 2019.

On January 19, 2018, changes to regulations for protecting human research participants (also known as the revised “Common Rule”) were scheduled to take effect. However, the revised Common Rule has been delayed. We learned on June 19 that the revised Common Rule will be delayed for an additional six months. The new compliance date is now January 21, 2019. Institutions do have the option to implement three provisions during this delay to exclude IRB review for certain activities, eliminate continuing review for most minimal risk research, and eliminate the IRB’s review of grant applications. The University of Minnesota will not implement these provisions prior to the compliance date.

New regulations do not impact studies approved prior to January 21, 2019. 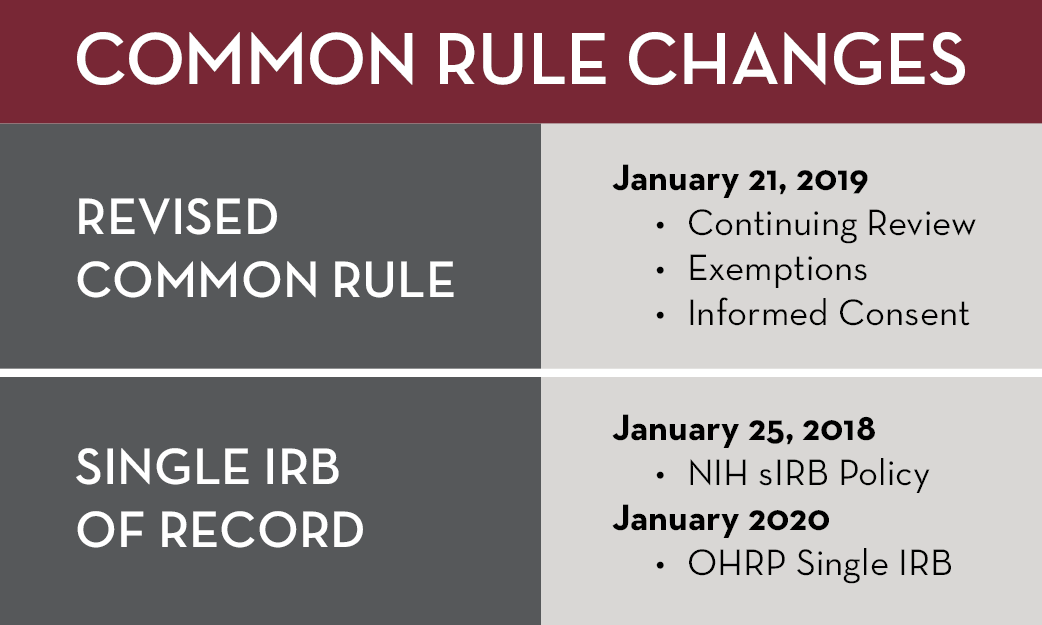 Many Common Rule changes relate to IRB management and function, but researchers may also be affected.

Continuing review is no longer required for some minimal risk research, including studies where the only remaining activity is the analysis of identifiable data/biospecimens or activity to obtain follow-up clinical data. In most cases, minimal risk studies will no longer require continuing review. The IRB will notify researchers upon initial approval about any post-approval review requirements.

The categories of research that are exempt from IRB review have been expanded and some existing categories have been clarified. Some exemptions may require "limited IRB review" (similar to an expedited review process), while others may qualify for "self-determination." Under the revised rule, researchers will still submit all human participant research to the IRB to determine any exemptions.

Watch OHRP Video: When Does the Common Rule Apply? Review of the Basics Under the Revised Rule (18:14)

A new "Key Elements" section and rearranged content aims to facilitate a potential research subject's decision to participate or not. A new option for broad consent may be available in the future for University of Minnesota studies, but the University will not offer this option to researchers until it receives further guidance about implementing the option from regulators and advisory groups: Office for Human Research Protections (OHRP); Secretary's Advisory Committee on Human Research Protections (SACHRP).

Most federally funded collaborative research projects located in the US that require IRB oversight will be required to use a single IRB (commercial, academic, or hospital-based) starting January 2020. See the NIH Regulatory Changes.

What Researchers Can Do