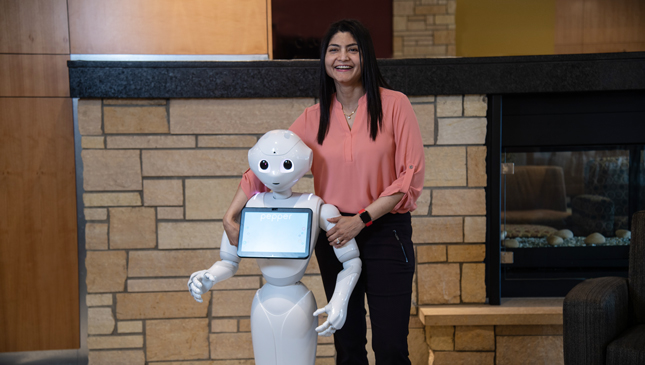 Arshia Khan is a computer science professor and director of graduate studies in the Swenson College of Science and Engineering at the University of Minnesota Duluth (UMD). She is harnessing her love of robotics to help people live better lives. Driven to understand more about her family’s long history of heart disease, Khan began researching artificial hearts and how robotics could help people recover from open heart surgery. When she learned that people who have suffered heart attacks have a significantly higher risk of developing dementia, she shifted her research focus to developing a smart home that can help dementia patients live fuller lives and receive better care.

Khan’s smart home includes spatial sensors placed around a newly diagnosed patient’s home and wearable sensors that track their movement, behavior, and physiological data. A robot with artificial intelligence learns about the patient’s habits and daily routines so that as dementia symptoms worsen, the robot can remind patients about things they’ve forgotten to do. It also can alert clinicians if a patient falls and cannot get up, has heightened anxiety, or is sleeping poorly.

“The robot can perform some of the more mundane tasks caregivers do, allowing the caregiver to focus on the things the robot cannot do,” said Khan.

For example, a robot can offer reminiscence therapy—in essence telling the patient the same story over and over again—without getting frustrated or tired as a human caregiver might.

“My goal is to help care be more proactive instead of reactive,” remarked Khan.

As a woman, this topic hits especially close to home for Khan since women have twice the risk of dementia as men but also make up 70 percent of dementia caregivers. Khan wants to raise awareness of this and other issues in her field that disproportionately affect women and diverse communities. That’s one reason why she prioritizes training diverse researchers, who can go on to share what they’ve learned in their own communities.

Tech Comm has provided assistance to Khan in multiple avenues that are important for translating her research commercially including guiding her through the steps she will take to pursue a patent application on her innovation. In addition, Tech Comm has provided support to Khan in her applications for translational grants to fund the next phases of her work (SBIR and STTR). Although the pandemic has slowed down her project, she remains hopeful that she will soon collect the data she needs to advance her smart home system to the next stage of development. 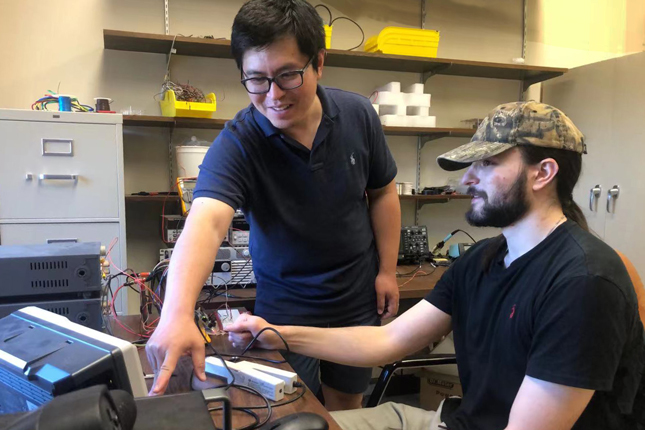 Peng Fang is passionate about power electronics. As an assistant professor in the department of electrical engineering in the Swenson College of Science and Engineering at the University of Minnesota Duluth (UMD), Fang is finding ways to transform electricity more efficiently to help make our lives more convenient and greener.

Fang works in the field of power electronics, which deals with voltage conversions (e.g. high voltage to low voltage, or AC to DC). His research focuses on power conversion. One example of his research is working to reduce EV charging time for an onboard electric vehicle charger. One day, his inventions could lead to an electric car that charges in your garage almost as quickly as you could pump gas into an internal combustion engine. He could ultimately design heavy-duty power converters that transform electricity across wide voltage ranges without losing so much of that power along the way. His work has the potential to lower the cost of owning an electric vehicle.

He does not know yet whether his inventions will be commercially viable, but Fang reached out to Tech Comm early in the technology development process, to ensure he’ll be ready if they are.

“There is a huge gap between research and commercialization,” Fang says.

As a researcher, he wants to focus on innovation and the performance of his invention. But if he wants to commercialize it, he also must consider reliability and cost and how his innovations compare to other alternative solutions.

“It is very important to understand the needs from industry,” says Feng. “You have to think about everything from the potential company’s perspective.”

Tech Comm’s Tim White (based at UMD) and Eric Olson (from the Twin Cities campus) have spent the past two years helping him do just that.

"It’s never too early to ask for help," says Feng. He contacted Tech Comm because he thought he had “a very good idea” and he wanted to make sure he secured intellectual property protection. Beyond that, Tech Comm helped set up his entire project to succeed beyond the confines of a research lab or academic journal.

“Reach out to Tech Comm as early as you can,” he advises his fellow researchers. “That way you can narrow down as early as possible what is important to the industry."