We have launched more than 200 startups (video) based on UMN research since the Venture Center was formed in 2006, with more than $1.8 billion raised in investment capital, IPOs and acquisitions (2022 survey). Ten UMN startups have been acquired or have gone public since 2017, underscoring the relevance of University innovations and technologies.

BKB Floral
License executed: April 2018
University inventor: Marc Hillmyer
Renewable polymer to produce a green material that can be used in the florist industry replacing the material used to mount stemmed plants in vases and retain moisture for display.

Counterflow Technologies
License executed: January 2020
University inventors: Alison Hoxie, Paul Strykowski, and Vinod Srinivasan
Spray nozzles for liquids which use less air, pressure and energy to apply a range of low and high viscosity liquids. These nozzles can be retrofitted to most, if not all, existing spray installations.

Jord BioScience
License executed: April 2019
University inventor: Linda Kinkel
Biological plant control mechanism that promotes increased crop yields with a mixture of bacteria that can be optimized for a specific crop and for a specific set of physical and environmental conditions.

Aspire Air
License executed: February 2021
University inventor: Christopher Hogan
Portable hood that covers a patient’s head while in a hospital bed reducing the spread of infectious disease. Vents to an external filter, allowing care give access to the patient.

Orasi Medical
License executed: September 2007 (inactive)
University inventor: Apostolos Georgopoulos
Diagnostic tests that detect the unique disruptions in the electrical activity of the brain caused by Alzheimer’s disease to aid a physician in the early diagnosis and initiation of treatment of patients.

PeopleStat LLC
License executed: March 2018
University inventor: Ron Siegel
Collects and analyzes anonymized data streams and couples with machine learning to provide feedback to people who are either prediabetic or actively diabetic so that they can make appropriate lifestyle changes.

Yonder
License executed: December 2017
University inventor: 2017 Medical Device Center Fellows
An application that runs on a tablet device for children to use before they visit the dentist with the objective of reducing the anxiety brought on by the pending visit.

What startups are we helping to launch today? 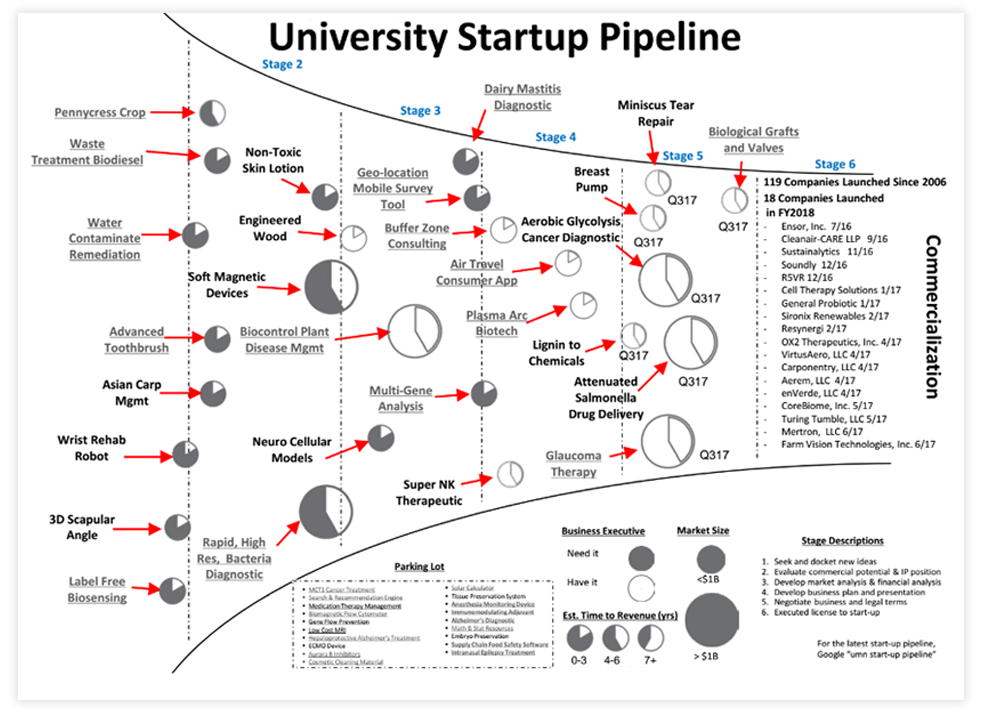 Contact venture@umn.edu to schedule an appointment and learn more.