After adjusting for inflation, farms in the state earned the lowest median farm income in 2018 that has been recorded in the past 23 years, according to data tracked by University of Minnesota Extension and agricultural Centers of Excellence within Minnesota State. The reported median net income was $26,055 in 2018, down 8 percent from the previous year. Farmers in the lowest 20 percent reported losing nearly $72,000.

“We don’t have consistent numbers that go back that far, but it is very likely that 2018 was the lowest income year for Minnesota farms since the early 1980s,” said Dale Nordquist, associate director of the U of M’s Center for Farm Financial Management and an agricultural economist at Extension. “That said, the previous five years were not much better, so many Minnesota farms have had a string of low-income years and that has both financial and emotional impacts.”

The economic pain was widespread. The median producer in all four of Minnesota’s primary agricultural products earned a net farm income of less than $31,000.

“It’s important to understand that these are small businesses that don’t pay themselves a salary, so that net farm income reflects what they made from the farm to feed their families,” Nordquist said.

Dairy farms were hit particularly hard by low prices in recent years, with milk prices in 2018 down 7 percent from the previous year—and 33 percent from their highs in 2014. Beef and pork producers felt a similar blow, with pork down 9 percent and beef maintaining already-low profits. Meanwhile, spring flooding and other weather woes coupled with low prices for all major crops left growers, especially those in southern Minnesota, with low profits.

Looking ahead, the US Department of Agriculture projects somewhat higher profits nationwide for agriculture in 2019. Nordquist, while optimistic, is hesitant to forecast increases in Minnesota.

“At this point, there are way too many variables to know where we will be a year from now,” he said. “On the cropping side, costs are projected to be higher and there is no relief yet on prices, so it is a little hard to see where that increase might come from.  Hopefully, we will see some improved profitability in dairy and livestock agriculture.”

Read the full story on the farm income data for more about the findings. 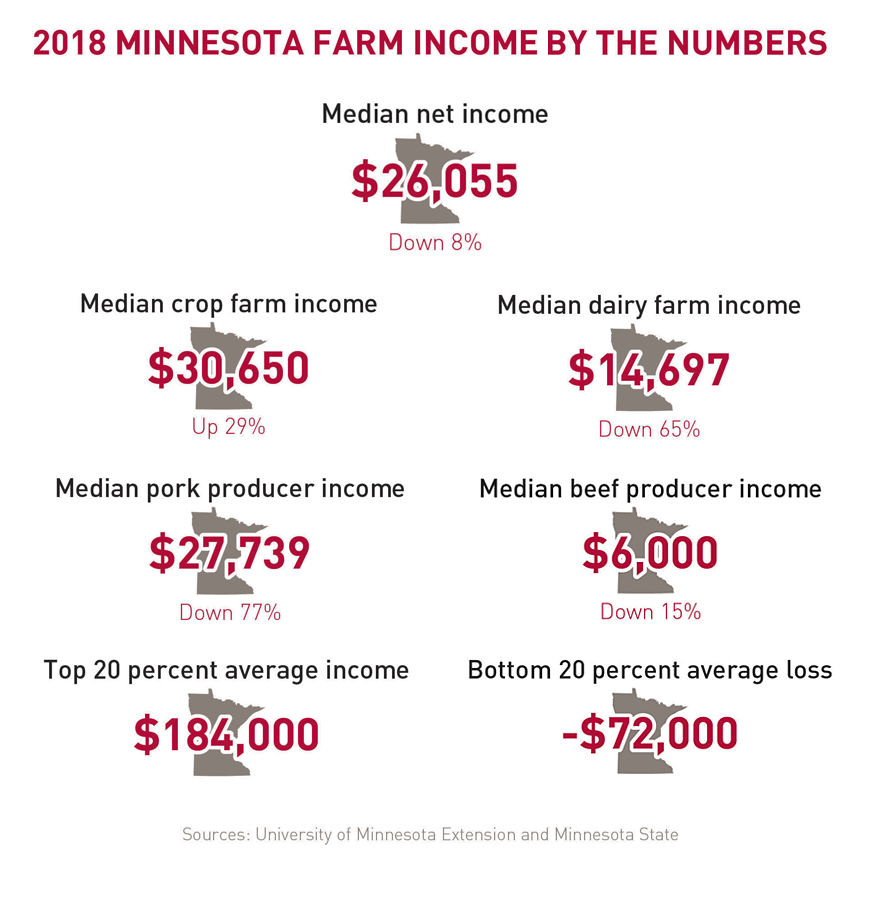