The Office of the Vice President for Research (OVPR) tracks key research metrics for the University of Minnesota, including national rankings, proposals and awards, sponsored expenditures, and technology commercialization performance measures. Several of these metrics are part of Commitments 2 and 3 in the University’s MPact 2025 dashboard and progress card.

Vice President for Research Shashank Priya presented a more detailed analysis of the University’s fiscal 2022 research and technology transfer work to the Board of Regents at its December 2022 meeting. Watch the presentation from December 15, 2022 or see presentation slides, Research At-A-Glance, and the printed annual report.

FY 2022 research data is available in the OVPR Research Reporting Center for analysis by departments and colleges.

The $1.05 billion research award total in FY 2022 represents the continued strength of the University’s research enterprise.

Awards by Source: All Campuses, FY22 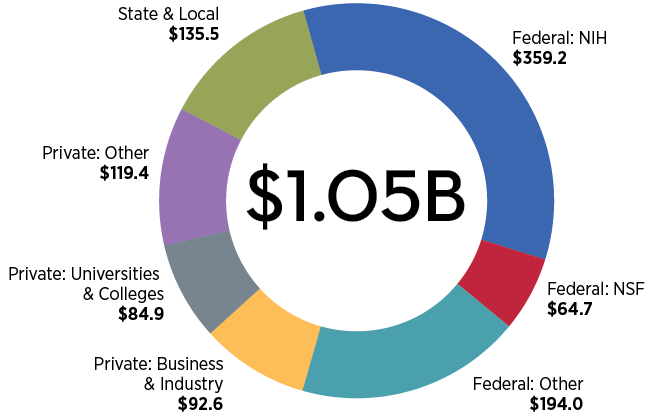 Overall, many of the FY 2022 awards received carried large dollar amounts. The University has seen a 39% growth in the number of high-dollar awards (over $1 million) over the past five years. Over a five-year period (FY 2018-FY 2022), the University’s awards have been on a positive trajectory overall and across all funding sources.

More than half (56%) of award funding went to medical and health-science related colleges and units. On the Twin Cities campus, the College of Food, Agriculture, and Natural Resources saw a 52% increase ($32.5 million) and the College of Liberal Arts saw a 62% increase ($12.8 million) in funding. The University’s Duluth campus saw a 137% increase in awards, receiving $23.8 million total.

Research expenditures, which include both external awards and internal institutional funding and are gathered then published by NSF in the following year, were $1.07 billion for the Twin Cities campus and $1.10 billion across all campuses.

Based on FY 2021 expenditures, the University’s Twin Cities campus ranked 14th among US public research institutions in the HERD (NSF) survey. It ranked 10th among the same group according to another ranking, the Academic Ranking of World Universities (ARWU/Shanghai), and 44th among all world universities.

At 14th, the University is within $75 million or 7% of the next five public universities above it in the HERD survey. While placing among the top ten public research universities in HERD is a goal set out by the University’s MPact 2025 plan, Vice President Priya told the University's Board of Regents, this small differential should not distract the University from long-term planning that will result in improved and sustainable standing.

Looking ahead, the University is positioning itself for continued success through a number of initiatives outlined by VP Priya:

Other initiatives include expanding gap and capital investment funding pools, establishing a Faculty Burden Reduction Committee, and relaunching the Social Justice Impact Grant program. With two years of sponsored research awards over $1 billion, VP Priya has also called for investment in research infrastructure and research services to match this new research plateau as well as to prepare for future growth.

In fiscal year 2022, the University was issued a record 241 patents, up from 181 patents the previous year. Technology Commercialization’s Venture Center also launched a record 22 startup companies. The University’s MPact 2025 plan has set a goal of spinning out 25 startups annually by 2025, and the FY 2022 total indicates the University is on a path to meet that goal.

In FY 2022 the University passed a milestone of 200 startups spun out since the formation of the Venture Center within UMN Technology Commercialization in 2006.

The University’s technology transfer work has been recognized for its excellence in national and global rankings, including: