Path for Robotics Runs Through Minnesota

When time to deliberate is limited, having all the facts is key to making a sound decision. Soldiers, law enforcement officers and firefighters seldom get the luxury of time, and have mere minutes to assess a potentially dangerous scenario before taking action.

First responders can now employ a reconnaissance team that gathers important information and keeps them and bystanders out of harm’s way. These “scouts” are discrete, durable and fearless, and are now deployed in 33 countries around the world. Invented by computer science and engineering professor Nikos Papanikolopoulos, Scout robots are braving hostile environments to save lives. 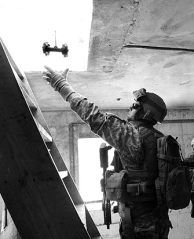 Scout is the first-ever throwable, mobile reconnaissance robot capable of surveying its environment in complete darkness. In all its various iterations, the small robot can collect and broadcast audio/video surveillance in real time, traverse rough terrain, withstand impact, dust and water, and even jump up stairs or over obstacles. Its operator can control up to three robots at once, to evaluate a subject from all angles. There are more than 2,000 Scout robots currently deployed in Afghanistan alone, where they protect U.S. and allied troops.

The Scout robot has come a long way from early prototypes. Under continued development by U of M startup ReconRobotics, Scout is now assisting more than soldiers. Since its launch in 2006, the company has applied the technology to safeguard law enforcement and security officers. Of the 4,800 robots deployed around the world, a growing portion are employed by SWAT and counter-terrorism teams.

ReconRobotics is one of many companies gearing up for a robot revolution. And although the Scout may not be a living, breathing asset, the company is confident the bot will be instrumental for humans on the front lines.

“We take valuable technologies out of the lab and apply them to better the human condition,” says Andrew Borene, director of business development for ReconRobotics. “The greatest ideas in the world are of little use if we can’t use them to benefit the lives of regular people.”

The possibilities for robotics are infinite. Luckily, Minnesota possesses three core competencies that will position it as a hub for the growing robotics industry. First, leading sensor and automation companies like Honeywell, PaR Systems and MTS are headquartered nearby, which has attracted a burgeoning robotics startup community. Second, the U of M is nurturing its strengths in agricultural robotics, medical robotics and environmental monitoring. Third, and most importantly, students in Minnesota have shown enthusiasm for robotics in recent years.

By inspiring K-12 students to pursue their interest in science and mathematics, FIRST Robotics is inspiring the next generation of robotics pros. In 2012, Minnesota held third place in number of teams enrolled in FIRST’s annual robotics competition, after Michigan and California. In 2006, only two Minnesota teams participated in the competition; last year 170 teams were involved.

“Minnesota now has more high school robotics teams than varsity hockey teams, at combined levels of robotics,” says Borene. “We have some incredible robotics industry potential here. Robotics as a field is how the United States can regain dominance in technology, through STEM education. ”

Robotics Alley hosted “Minnesota Robotics Day” at the state capital on Jan. 31, 2013. An initiative founded by ReconRobotics and the Minnesota High Tech Association, Robotics Alley aims to spur public-private partnerships in the business, research and development of robotics and automation systems. Representatives from dozens of Minnesota robotics organizations attended the event to help educate legislators on the state’s role in this emerging global industry.

What’s Next for Robotics?

Leaders in robotics are confident the field will someday affect the face of society as profoundly as the personal computer changed our lives. When envisioning the bright future of robotics, industry pros point to the following developments as proof Minnesota will be leading the charge:

The Minnesota Discovery, Research and InnoVation Economy (MnDRIVE) initiative seeks to establish a new, ongoing partnership between the U of M and the state. The aim is to discover new knowledge through scientific research to advance Minnesota’s economy, position the state as a leader in key industries, and improve quality of life for all Minnesotans. The university will ask the state legislature to provide $18 million beginning in 2013 to support scientific research in four critical areas, including robotics.