As the world waxes warmer, scientists are scrambling to prioritize conservation efforts.

A new global study of earthworm diversity suggests looking at soil, as climate change could seriously affect earthworms and the many functions they provide.

Based on data compiled from 6928 sites in 57 countries—including over 100 sites sampled by University of Minnesota researcher and study coauthor Adrian Wackett—the work reveals that climate variables—temperature and especially precipitation—influence earthworm distributions and diversity far more than the properties of the soils they inhabit.

Earthworms exert major controls over how soils function; along with other soil fauna, they regulate water and nutrient flows at the base of ecosystems. Conservation efforts that neglect them and focus solely on aboveground species could backfire and harm aboveground species dependent on soils for food and shelter.

To avoid this pitfall, “it’s helpful to have some grasp on where soil fauna like earthworms are most abundant, and the primary environmental factors driving their distributions,” said Wackett, a researcher in the Department of Soil, Water, and Climate (SWAC) in the College of Food, Agricultural, and Natural Resource Sciences.

The study, led by Helen Phillips, PhD, at the German Centre for Integrative Biodiversity Research in the Institute of Biology at Leipzig University, was a major international undertaking involving more than 100 scientists. It appears in the journal Science.

In formerly glaciated lands such as northern North America, Scandinavia, and Finland, many sites contain diverse non-native earthworm communities introduced by European settlers after glaciers had wiped out native earthworm populations in the last ice age.

“Earthworms are king underground. They’re the biggest builders and most voracious consumers in soils,” said Professor Kyungsoo Yoo, PhD, of SWAC, who was not involved in the study. “Their responses to climate will be different from aboveground dwellers. This study helps us understand these crucially important animals.” 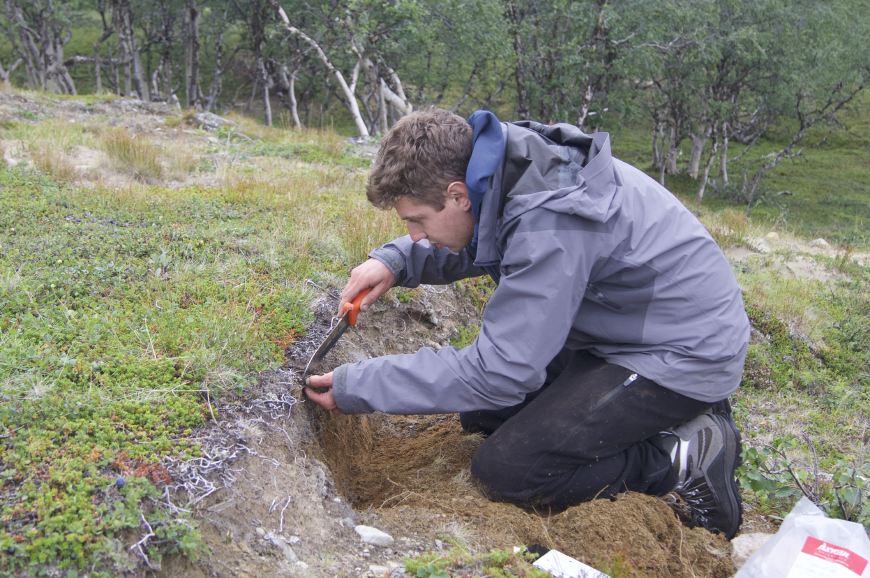 Adrian Wackett samples the soil for earthworms in Sweden.

It has long been thought, said Wackett, that earthworm distributions are governed by where soils are most fertile; e.g., with suitable acidity, texture, and availability of calcium, nitrogen, and other essential nutrients. But he wasn’t shocked that these properties turned out to be of comparably less importance.

“I’ve seen some invasive earthworms living at acidities close to vinegar,” he said. “I view earthworms as regulating and enriching soils more than vice versa.”

For example, earthworms make excellent “bioreactors for nutrient recycling,” Wackett said. In their guts, they catalyze the decomposition of plant litter and unlock vital nutrients trapped in the soil matrix, then excrete those nutrients back into the soil. This turns “raw,” inaccessible elements like phosphorus, nitrogen, and calcium into plant-available forms that nourish plant and animal life aboveground. This recycling system is particularly vital in tropical ecosystems, where many soils are nutrient-poor.

But in high-latitude places like northern Minnesota, when earthworms eat leaf litter and move nutrients deeper into the soil, it can have adverse effects. Many native forest plants, like lady slippers and ferns, evolved with shallow roots to mine nutrients from the litter layers that accumulate in formerly glaciated forests without earthworms. When feeding by invasive earthworms thins these litter layers, many native forest plants are starved of nutrients, while native tree saplings are left unprotected against browsing by hungry deer. Eventually, this combination wipes out the entire forest understory, creating openings for invasive species like buckthorn.

Earthworms’ responses to climate change can have positive or negative effects on a variety of other species.

In parts of the tropics, said Wackett, the “dry” season is getting hotter and drier, and it’s unclear whether earthworms—which generally prefer moist conditions—can tolerate these changes. If not, their ecosystem services may be lost and tropical forests would suffer.

“It remains unclear exactly how ‘nature’s gardeners’ will respond to future environmental change, but given earthworms’ profound ecological reach, a better understanding of their subterranean world and how they interact with it is a crucial first step,” Wackett said.