A Halloween Story: How Our Brains Generate—and Control—Fear

To carry out their vital functions, neurons in our brains need help from cells called glia—from the Greek word for “glue”—which have long been known to serve neurons with nourishment, protection, and support.

But when it comes to the critical job of managing fear, some of these cellular servants turn into masters. A University of Minnesota-led study shows that glial cells deep in the brain determine how neurons respond to fear-inducing situations. And in tests with living mice, stimulating these particular glial cells dampened the animals’ response to fearful sounds. The study is published in Nature Neuroscience.

“The classical idea is that brain function and animal behavior result only from neuronal activity,” says Alfonso Araque, professor of neuroscience and corresponding author of the study. “But now there is strong evidence that they result from coordinated activity of both neurons and glial cells.”

Fear and anxiety begin when the brain processes visual, sound, or other sensory information and relays it to neurons in one part of the amygdala, an almond-shaped structure deep in the brain. When they fire, those neurons in turn excite—or try to—neurons in another part, called the medial nucleus. And it is the medial nucleus that holds the key to the fear response.

But neurons in a third part of the amygdala act to inhibit the medial nucleus. Therefore, says Araque, “the medial nucleus must balance these inputs and ‘decide’ whether to initiate a fear response.” 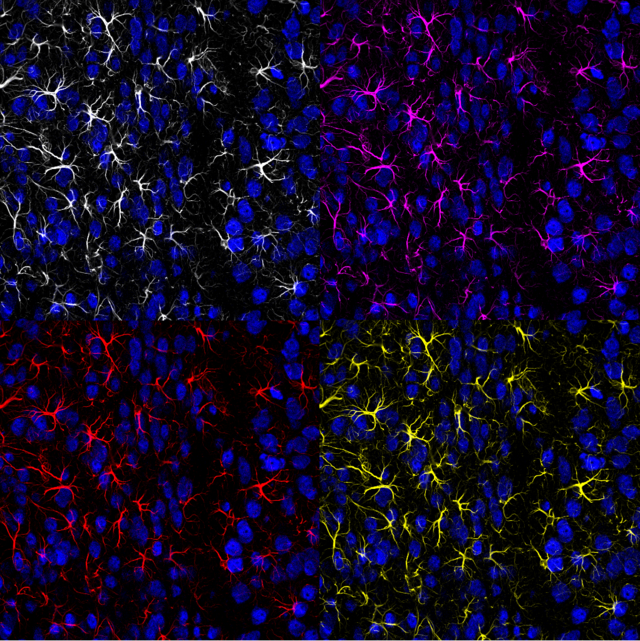 Astrocytes: A Counterbalance to Fear

When activated, the medial nucleus also sends chemical messengers to glial “referees” that act to keep fear, and the responses to it, from getting out of control or lasting too long. The messengers are cannabinoids (relatives of the soothing chemicals in Cannabis plants), and the glial referees are known as astrocytes.

Astrocytes are star-shaped, with many long, fingerlike extensions. In the amygdala, the extensions twine around specialized areas of both the excitatory and inhibitory neurons—areas where those neurons form synapses with neurons of the medial nucleus.

In response to the cannabinoid messengers, astrocytes communicate with both sets of neurons.

“We discovered that this communication simultaneously dampens the excitation and enhances the inhibition the medial neurons receive,” says neuroscience graduate student Mario Martin-Fernandez, first author on the publication. “The net effect is to suppress activity in the medial nucleus and limit the fear response.”

“A key aspect of the processing of fearful stimuli is the ability to identify when those stimuli no longer represent a threat. This is called fear extinction,” says Martin-Fernandez. “Failures in proper fear extinction are closely related to conditions like generalized anxiety and post-traumatic stress disorder.

"We are currently investigating to what extent astrocytes influence fear extinction. This may lead to considering these cells as therapeutic targets."