Years ago, when Paul Boswell, Ph.D., was teaching at the University of Minnesota, he noticed many students from across the sciences ran up against a common barrier: they didn’t know how to program. Without computer programming skills, some types of research is more difficult to do, while other types are off the table entirely, highlighted in recent articles in Nature and Wired.

Boswell knew it was important for students to understand more about computers at an earlier age, but to him, the multitude of programs, devices, and courses already available to teach coding fundamentals often overlooked a very important component. 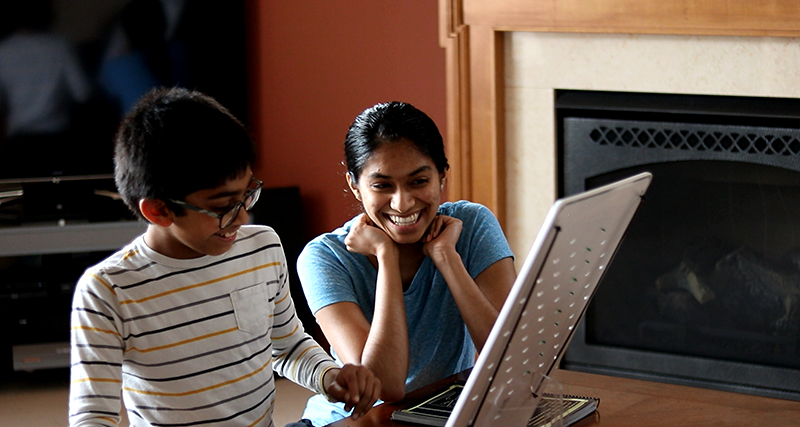 “The problem is that all of these websites, robots, and other educational materials require a computer or a computer chip,” he said, adding that the actual “thinking” the computer does—its logic—remains hidden to the user. “Kids really don’t understand what’s going on underneath the surface.”

Boswell, then a research assistant professor of analytical chemistry in the College of Food, Agricultural and Natural Resource Sciences, took up a side project. He began developing a marble game, inspired by the workings of mid-1900s mechanical computers, that would help players learn and practice the basic concepts of programming. This game, which came to be known as the Turing Tumble, is now close to reaching living rooms and classrooms. Last month, the University’s Venture Center helped Boswell launch a startup company (also named Turing Tumble), to manufacture and sell the game.

The game challenges players to solve computational puzzles by attaching game pieces to a grid of plastic pegs that each perform a specific operation when a marble reaches them. When marbles are fed through the top of the board, they follow the logic of the game pieces and, if these pieces are configured correctly, the system sorts the marbles in a way that matches the puzzle’s solution.

Boswell said the game is different from other educational coding activities because it’s more approachable to programming newcomers. The game demonstrates some of the basic concepts of computer logic without getting bogged down by the syntax of coding languages that can confuse or repel new coders. Instead of mulling over the precise use of semicolons, parentheses, and capital letters in lines of code, for example, players can visualize computer logic in action and easily adjust it to perform different operations.

Using just the pieces Boswell created, the Turing Tumble can add, subtract, multiply, divide, and more, using the same type of binary operations at the heart of “normal” computers. If it were large enough, it could perform any function a regular computer could.

Printing Out the Pieces 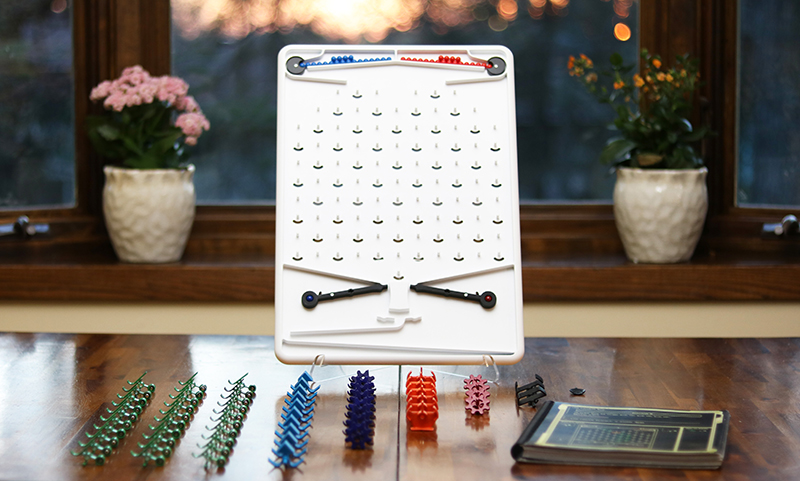 Boswell, who now lives in Shoreview, MN, and works for a software firm that uses computational mathematics to develop health care programs, has a long history with the U of M. He began his graduate studies in analytical chemistry at the U in 2003, and later returned as a post-doctoral researcher in 2009.

During Boswell’s five years in CFANS, his research focused on developing a new approach to identifying small molecules—biologically active compounds useful in research and pharmaceuticals. The work was computing-intensive, requiring researchers to write lots of software, and Boswell had a hard time finding students who could program.

“It really limited the types of research that were possible,” he said. “I guess that’s part of what precipitated the Turing Tumble—trying to grow the base of students practiced in computational thinking and interested in learning to code.”

It was at the University that Boswell first used a 3D printer to create the early plastic models of the Turing Tumble’s pieces. He tested many different versions of each piece, reworking each until they all fit together and interacted correctly on the game board.

Around this time, serendipity struck. Boswell noticed an illustration done by Jiaoyang Li, a high school student who had come to work in a University chemistry lab as part of a summer program, and was impressed by her artistic talent. He asked Li if she would help him create a comic that would serve as a storyline for the challenges in the game.

Li agreed and set to work illustrating the adventures of Alia, a space engineer who attempts to escape from a deserted planet. The narrative weaves together the 51 puzzles included in the game’s manual, teaching concepts early on that are necessary to solve increasingly complicated puzzles as the player progresses. Li would later work as part of Boswell’s research group at the U, and she is currently a senior majoring in art and computer science.

Funding to Kick Things Off

After Boswell left the University, he kept developing the Turing Tumble. Eventually, he finished the prototype and turned his sights to launching the game. It would take funding to cover the costs of manufacturing game materials, especially the expensive, customized injection molds needed to mass-produce the game’s 14 types of plastic parts.

On June 1, Boswell launched a Kickstarter campaign hoping to raise $48,000 by the end of the month. The campaign quickly amassed ample support. At this point, with only a few days left, funders have already pledged over $285,000—more than 600 percent of Boswell’s goal.

With the funding lined up, he expects to have the game available in stores and online in early 2018. Boswell said he was excited to have the game finished and especially to get it into classrooms. The Turing Tumble can tie into several school subjects, including circuits, computational thinking, and problem solving, and Boswell is also looking at how it can tie into grade-specific standards.

Two nearby schools, Turtle Lake Elementary School in Shoreview, MN, and Lakes International Language Academy in Forest Lake, MN, will each receive a set of 20 games from donors. Boswell said having the schools nearby will make it easy to support their integration in a hands-on way before working with schools farther away.

“Computers are everywhere now, and kids start using them so young,” Boswell said. “I hope this will help them understand, at a more fundamental level, how computers work.”