Early last summer, as the University of Minnesota’s Sunrise Plan began to assess how to adapt to COVID-19 and gradually bring the University community back to campus, Facilities Management (FM) set to task making University buildings as safe from the virus as possible.

One pillar of this effort was the HVAC Workgroup, made up of representatives from FM, four UMN campuses, University Health and Safety, and faculty. Jay Amundson, district engineering manager for FM’s Energy Management division, led the workgroup in searching for ways to adapt the heating, ventilation, and air conditioning systems in classrooms and other group spaces to reduce the likelihood of the virus spreading indoors. To help inform those efforts, the Center for Filtration Research (CFR) conducted research on how HVAC systems influence the spread of particles that could carry the virus that causes COVID-19.

Ultimately, this collaboration of operations and research experts resulted in changes that made the classrooms safer for students and instructors as limited in-person learning resumed last fall—a result that delighted David Pui, PhD, Regents Professor of mechanical engineering and CFR director.

“When I first participated in the workgroup, I expected to listen in and periodically answer some questions that people would have,” he said. “Then I saw that we could actually make some original contributions in this area.”

When someone coughs or sneezes, they expel droplets of fluid between 80 and 100 microns in size—roughly the width of a human hair. The droplets generally settle to the ground within about seven seconds so they pose relatively little threat of spreading COVID when students and instructors maintain six feet of separation.

Coughing, sneezing, speaking, and breathing also emit much smaller particles, Pui said, that are less than one micron in size. These pose the bigger problem, as they tend to hang in the air much the way cigarette smoke does. The more particles there are lingering in the room, the greater the risk of infection becomes.

By factoring in a wide range of variables, Qingfeng Cao, PhD, postdoctoral research associate with CFR, built a computer model to calculate the aerosol concentration of particles over time. Based on the size of the room, the rates of airflow in several parts of the HVAC system, and the number of occupants, the model illustrates how long the system needs to run to remove 80 percent of airborne particles, a threshold for safer occupancy in the room. The model can also calculate how long it takes for all the air in the room to circulate out and be replaced by new air. This model has been validated by extensive measurements in a mock-up classroom, Mechanical Engineering Room 456.

The team made the modeling tool publicly available, Pui said, so that those outside the University with some knowledge of HVAC or engineering would have a resource for gauging the risk of virus spread in their own buildings.

“The software is very user-friendly and anybody should be able to go in and use it,” he said. “We hope people will do that, for the benefit of classroom safety around the country.”

Beyond how many particles are in a room, the researchers sought to understand where those particles tended to collect within rooms.

Seong Chan Kim, PhD, senior research scientist in CFR, set up experiments in a classroom that dispersed sodium chloride into the air (a harmless stand-in for COVID-carrying particles) from the place where an instructor would stand at the front of the room. Instructors speak most and project loudly, Kim said, making them the main source for infectious particles in the room. In as little as 15 minutes, sensors detected higher particle concentrations in the three areas of the room most removed from the path between the HVAC’s incoming and outgoing airflows. The front-row-center seat, nearest to the instructor, recorded nearly twice the concentration of many of the other sensors.

“Since the location of the HVAC system is fixed, we cannot change it,” Kim said. “What we can do is increase the total flow rate for better air mixing and move the instructor’s location so the particles dispersed can be directly removed by the airflow.”

Kim ran a second experiment after flipping the room’s orientation to place the instructor at the opposite side of the room. He also activated the fan coil unit (normally used to cool a room in warmer months, but capable of being run without coolant in colder months) to increase the room’s air flow and act as a built-in air cleaner to remove airborne particles more quickly and efficiently. As a result, all sensors recorded lower particle concentrations.

Following this experiment, Kim also studied how particles in one room could move through the HVAC system to reach other rooms of the same building and found that such cross-contamination could happen in some circumstances, depending on the specifics of each HVAC system. 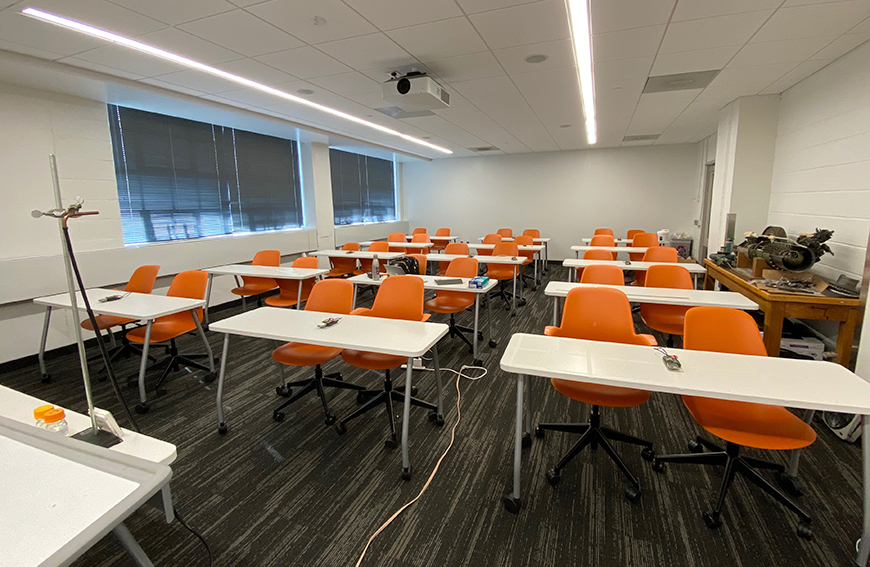 Air quality monitors placed on students’ desks detected aerosol concentrations of a particles emitted from the front center of the room, where the instructor would be. Photo: Seong Chan Kim, CFR.

Putting the Research to Work

Guided in part by the Center for Filtration Research’s findings, Facilities Management began making changes to classrooms. Based on the calculations from the particle concentration model and evolving industry standards around the pandemic, they decided to replace the MERV 8 HVAC filters in classroom buildings with a higher-efficiency filter, the MERV 13 model. The data provided crucial evidence that these higher-grade filters—which cost more and require more fan energy from the HVAC system—would indeed add up to a safer environment for students and instructors. For older classroom buildings without HVAC systems, FM instead installed portable filtration units.

On the HVAC systems themselves, FM increased the amount of outdoor air drawn in and decreased the use of recirculated air to further limit the spread of infectious particles within and between rooms.

“They’re running the buildings 24/7 with as much outside air as they can,” said Tom Kuehn, PhD, professor emeritus of mechanical engineering, who came out of retirement to lend his expertise to the project. “That tries to get away from the whole issue of recirculation and mixing air from room-to-room.”

Amundson said FM ultimately evaluated and adjusted airflow in over 430 large group spaces, with most of them being classrooms. While it’s common for operations staff to work with research departments to ensure building systems meet the needs of lab spaces, he said this project represented a type of collaboration he had has not seen in his time at the University.

“The cooperation between CFR and FM was a perfect fit of expertise during the pandemic,” Amundson said. “This was an extraordinary situation, calling for extraordinary measures. Although we cannot declare spaces ‘safe’ or not, we can help our community understand the risks related to their decisions. It feels great to make a difference.”

In addition to the project exploring how particles move through indoor spaces, the Center for Filtration Research led two other projects aimed at addressing the COVID-19 pandemic.

The center also recently explored how to mitigate airborne particles in a dentist’s office, teaming up with Prof. Jiarong Hong, PhD, from the Department of Mechanical Engineering and Profs. Paul Olin, DDS, Gary Anderson, DDS, and Paul Jardine, PhD, from the University’s School of Dentistry. As COVID spread, the high-frequency vibration tools called scalers that hygienists normally use to remove hardened plaque from teeth were banned to prevent them from sending tiny saliva particles into the air. Unfortunately, the low-tech alternative to these scalers are hard on hygienists’ wrists and patients’ teeth. Ou conducted a study that found creating a suction airflow near the mouth while using a vibrating scaler could effectively capture the tiny droplets most likely to spread COVID.