Junaed Sattar held up a robot a little larger than a shoebox. On the side of the machine were six fins to help it maneuver easily through water, and on the front were a pair of cameras.

This robot, he explained, can create real-time maps underwater (where GPS doesn’t work), signal commands like “yes” and “ascend to the surface” to human divers, and even distinguish between divers who are wearing full scuba gear. Programmed for the right purposes, its image recognition capabilities could help track the presence of invasive species in Minnesota lakes or provide a more efficient way to clear garbage out of waterways.

“This robot can tell if a given object in the water is plastic or a fish,” said Sattar, Ph.D., assistant professor of computer science and founding director of the Interactive Robotics and Vision Laboratory. “If you could get robots to find the places where trash deposits are, you could localize your cleanup efforts—you wouldn’t have to search the entire lake.”

As Sattar and his research team continue to fine-tune the aquatic robot, they are also settling into a new and improved lab space—and they aren’t the only robotics research team doing so. Earlier this month, the University of Minnesota’s College of Science and Engineering officially opened a new, 20,000-square-foot lab to accommodate research on ground, water, and aerial robots. The $13 million, state-of-the-art Gemini-Huntley Robotics Research Laboratory, funded primarily through donations with some additional state funding, includes nine flexible robotics labs and other work spaces for robotics faculty and graduate student researchers. The lab is located on two floors of renovated space in the Shepherd Laboratories building.

Nikolaos Papanikolopoulos, Ph.D., McKnight Presidential Endowed Professor in computer science and engineering and a world-renowned robotics researcher, said some of the greatest potential of the new robotics research lab will come from the way it promotes collaboration between experts with different academic backgrounds.

“This facility enables us to unite all of these disciplines under one roof,” said Papanikolopoulos, whose own research in the renovated area has already drawn on input from researchers with backgrounds in aerospace engineering, computer science, electrical engineering, medicine, agriculture, environmental monitoring, and mechanical engineering. “It promotes cross-fertilization—an exchange of ideas.”

The new lab can help advance research at a time when robotics technologies are becoming deeply ingrained in a wide variety of industries. The facility gives undergraduate and graduate students better opportunities to work side-by-side with faculty and make use of the latest technologies and research infrastructure, improving the University’s ability to educate tomorrow’s high-tech workforce.

“Robotics research is important in so many areas of our lives, including health care, agriculture, the environment, and the automotive industry,” Papanikolopoulos said. “We are hoping to make Minnesota a leader in robotics research and bring even more federal and industry research funding into the state.”

Ratcheting Up Support for a New Lab

The new robotics lab is a testament to how state investment in the U of M can spark the research and innovation that drives industries—and ultimately the state’s economy—forward.

It started with the MnDRIVE initiative, a partnership between the University and the state of Minnesota that aligns areas of research strength with Minnesota’s key and emerging industries. One of MnDRIVE’s key research areas is Robotics, Sensors, and Advanced Manufacturing. Funding in this area helped the University bring in additional faculty and further build its expertise around robotics research.

With that stage set, it was easier for private donors to fund the renovations for a new robotics lab. A total of $10 million in gifts came from two founders, the CEO, and a board member of manufacturing firm Gemini Inc. An additional $1 million gift was made in honor of engineering professor emeritus Patrick Starr—who advised the Solar Vehicle Project from 1992 to 2006—to fund the development of a new custom-designed solar vehicle workspace. Finally, $2 million from MnDRIVE funding helped to complete the project.

Now, with the new lab open, researchers will be better equipped to compete for federal research grants and attract sponsored research opportunities from industry.

More Than the Nuts and Bolts

The new research spaces that make up the robotics lab aren’t your typical labs.

That much is evident from the two-story, netted-in space that allows researchers to fly drones indoors to test new software and functions. Among these drones are ones that have the unique ability to fly autonomously in apple orchards, collecting data on the number and size of the fruit they see and to report to growers how large this year’s harvest is. This data can help orchard managers plan ahead in hiring the right number of pickers and allocating resources for storing and transporting the apples. 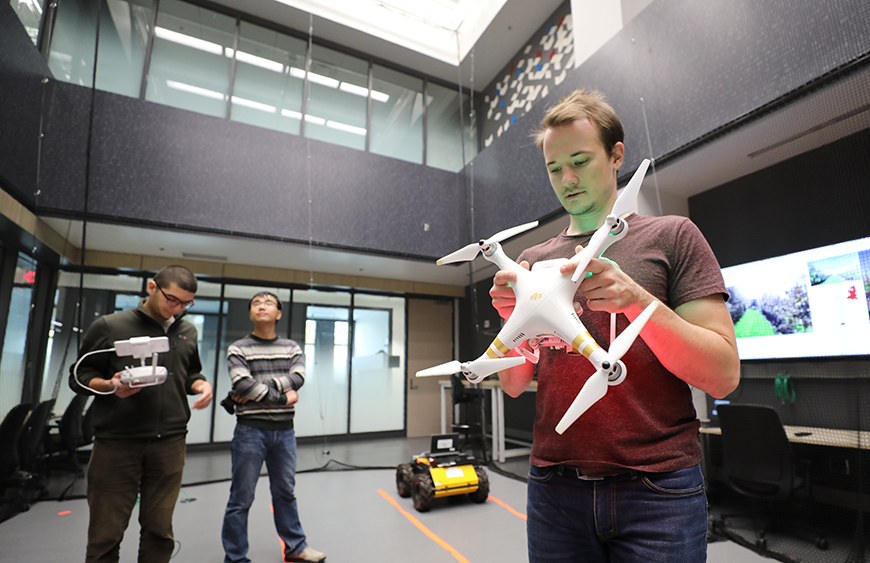 In another section of the lab, Maria Gini, Ph.D., professor of computer science and engineering, is among the researchers working with moving, speaking robots that can interact with young children to help diagnose autism earlier in their development. The technology can help researchers detect signs of the developmental disorder, which affects children’s ability to communicate and interact, at or even before the age of 2, allowing for earlier treatment.

There’s even a room in the renovated space dedicated to motion capture—specifically, a 3D behavioral imaging system that uses scores of high-resolution cameras to track a person or animal’s movement without the need for attaching little white dots to the subject’s body, as previous technology requires. Hyun Soo Park, Ph.D., assistant professor of computer science and engineering, said the motion capture technology can be used in numerous ways, from pinpointing the connection between brain signals and the body’s motor response to helping artificial intelligence understand distinctly human social signals, such as the direction of a person’s gaze, their facial expression, and bodily gestures.

See these projects and more in action:

New Robotics Lab at the University of Minnesota

Photos and video: U of M College of Science and Engineering.