A Silent Epidemic: Advocating Against Gender Violence in Colombia

After more than 50 years of civil war, Colombia reached a peace agreement in November 2016 that finally brought fighting to an end. But as violence ebbed in conflict zones, it swelled in the home.

According to a study by Colombia’s National Institute of Legal Medicine and Forensic Sciences, 86 percent of all crimes that involved violence are against women and girls. Within that number, 73 percent are committed by an intimate partner in the home.

Two researchers in the University of Minnesota’s Center on Women, Gender, and Public Policy recently affirmed that Colombia follows a recently documented trend, where physical and emotional abuse against romantic partners and spouses becomes more prevalent and severe during armed conflict and following the end of armed conflict. And while the nation has strong laws on the books to prevent this type of intimate partner violence, Greta Friedemann-Sánchez, Ph.D., associate professor in the Humphrey School of Public Affairs, and Peggy Grieve, J.D., a graduate student in Humphrey’s Master of Public Affairs Program, discovered those laws aren’t being implemented well enough to curb an epidemic of violence against women.

This spring, Friedemann-Sánchez and Grieve brought their findings from three years of research to the United Nations Human Rights Council (UNHRC) in Geneva to persuade its members to put pressure on Colombia to address intimate partner violence. They planned their visit in advance of Colombia’s Universal Periodic Review in May—a progress report that every UN country receives to assess their progress on human rights issues every five years.

The research was supported by the Human Rights Initiative, a joint effort of the College of Liberal Arts and the Humphrey School to support interdisciplinary, engaged research and teaching in the field of human rights with a goal of strengthening practice and the profession overall.

To reach the UNHRC, Friedemann-Sánchez and Grieve collaborated with The Advocates for Human Rights (AHR), a Minneapolis-based organization that works to promote and protect international human rights standards. AHR members had the credentials, knowledge, and advocacy experience needed to navigate the UN structure and gain quick, face-to-face meetings with representatives from member countries. With AHR’s help, Friedemann-Sánchez and Grieve relayed their findings and recommendations to about 50 member countries and with an oral statement to the UNHRC, in hopes they would pressure Colombia to address its intimate partner violence.

“Colombia must recognize the link between its armed conflict and gender violence,” Friedemann-Sánchez said. “Men who have spent their lives fighting, using tactics of war, acquire certain behaviors about how to resolve conflict and how to exercise their masculinity, which come back with them as they continue their lives at home.”

“Peace on a national level will require peace on a domestic level,” she added. “The implementation of these laws will improve only if there’s a recognition that it’s a national security issue.” 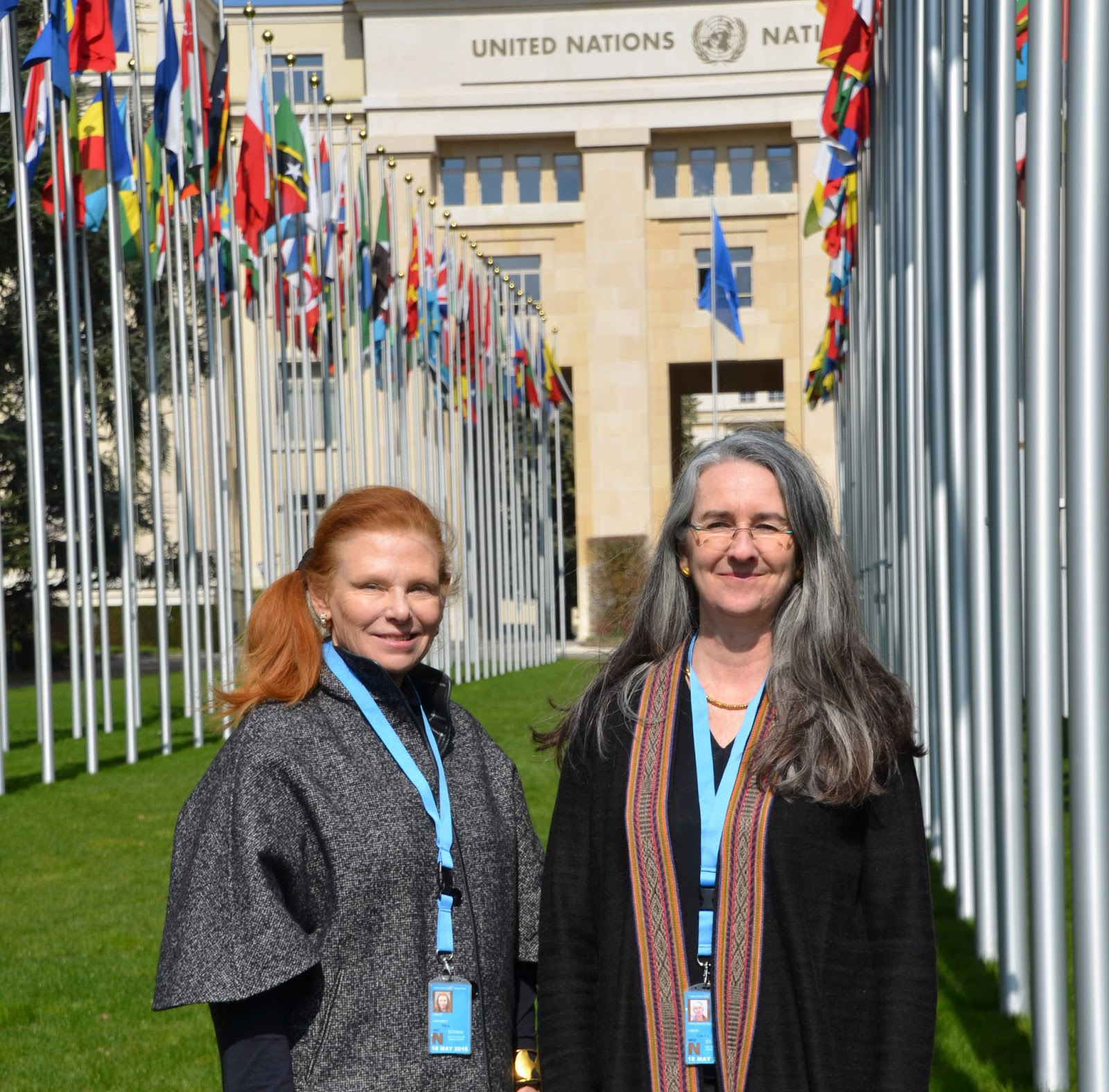 Greta Friedemann-Sánchez (right), Ph.D., associate professor in the U's Humphrey School of Public Affairs, and Peggy Grieve, J.D., graduate student in Humphrey’s Master of Public Affairs Program, outside of the Palace of Nations, home to the United Nations in Geneva, Switzerland. Photo credit: Jennifer Prestholdt, The Advocates for Human Rights

In Colombia, the “front line” for helping victims of intimate partner violence access justice, protection, and services is the family commissioner. These professionals, no matter how dedicated, juggle an enormous range of duties and face too many barriers to effectively carry out their jobs, Friedemann-Sánchez and Grieve’s research shows.

The issue is greater in small towns, rural areas, and low-income urban neighborhoods, which are home to ex-combatants like guerilla fighters, paramilitary, and the war-displaced. The demand for services is these areas has ballooned, leaving family commissioners struggling to keep up.

In their shadow report to the UN Human Rights Council, Friedemann-Sánchez and Grieve recommended Colombia’s federal government cut back the number of responsibilities family commissioners hold, increasing their capacity to focus on intimate partner violence. The researchers also recommended that family commissioners be represented at the federal level to establish a stronger connection between laws and their implementation.

Even though the scope of family commissioners’ roles is determined at the federal level, the positions themselves are funded at the city level. That means cities and towns may slash family commissioners’ funding when the budget is tight to meet other needs. It also means elected officials, like mayors, can choose to reduce funding based on their political views.

With limited resources, commissioners’ support staffs are often small and suffer from high turnover from temporary employees. Multiple teams will share the same office space, working in shifts to make the most of limited infrastructure.

To give these crucial public servants more stability and resources, the researchers recommended that Colombia set aside federal funds specifically to support family commissioners.

Pressure as a Path to Change

Why bring the research findings to the UN Human Rights Council, instead of Colombia? Friedemann-Sánchez, Grieve, and their advocacy partners in AHR, believed Colombia may be more receptive to addressing its intimate partner violence if scrutiny came on the global stage. A country’s Universal Periodic Review is often a good time to push for it to enact changes, and Colombia had responded positively to recommendations in the past.

While the final outcome of the recent review has not yet been published, there were encouraging signs that member countries had taken note of the intimate partner violence research. For example, representatives from several countries, including Slovenia, Sweden, and the United Kingdom, submitted questions to Colombia before the review asking about the nation’s plan to combat gender violence. During the review session on May 10, Uruguay’s representative specifically recommended that Colombia accept the request for the UN’s special rapporteur on violence against women—an investigator whose role focuses on examining and reporting on gender violence issues—to undertake an official mission to the country.

Regardless of whether Colombia assents to UN recommendations, there are other ways the research can have an impact. The report submitted to the UN is publicly available for world governments to review. Drawing international attention to intimate partner violence could pressure other countries where the issue is prevalent to focus on finding solutions as well.

Not all of the pressure for change needs to be external. The researchers have also translated the report into Spanish and sent it to the mayor’s offices in the cities where they conducted fieldwork and to family commissioners they interviewed during their research, who may decide to use it as a credible, independent recommendation when making the case for more support for the work they do.

As she waits to see what Colombia will do, Friedemann-Sánchez said she has enjoyed the opportunity to collaborate with The Advocates for Human Rights and strive for change. While publishing research in an academic journal can be a slow process, advocacy gave her and Grieve the chance to work toward more immediate results.

Still, Friedemann-Sánchez fears that if Colombia does not act on the recommendations, the problem will only continue to grow. She described the magnitude of the problem on a recent Civios podcast by the Humphrey School of Public Affairs.

“It’s like a silent epidemic; nobody wants to talk about it or recognize the connection between political/national security and family/individual security,” she said. “The most dangerous place for women in Colombia is their home, and homes are the most violent places in Colombia. We need comprehensive and harmonized public and private security policies.”