It looks like magic on video. With the flip of a switch, the person on the screen immediately ceases to tremble, regaining a measure of the steadiness and dexterity that came naturally to them before the onset of Parkinson’s disease.

This therapy, deep brain stimulation (DBS), uses an implanted electrode to electrically stimulate specific parts of the brain in a way that corrects the “noisy” neuron activity behind the involuntary movements common in Parkinson’s. The problem with this promising therapy, said Noam Harel, PhD, professor of radiology and neurosurgery in the University of Minnesota Medical School’s Center for Magnetic Resonance Research, is that not every patient receives a video-worthy benefit.

“There’s a big distribution of the quality of outcomes that patients actually get from DBS—in some cases, it can even cause more side effects than it heals,” Harel said. “What we understand today is the correct placement of the DBS electrode is the crucial part in deciding the outcome for the benefits. It’s just like real estate, it’s all about location, location, location.”

Last month, a University startup company based on Harel’s research reached a major milestone in helping ensure that electrodes finds its target and makes DBS more effective for more patients. Surgical Information Sciences (SIS) announced the first commercial use of its SIS System, which generates 3D maps specific to each patient that surgeons can use to more precisely target where in the brain to place DBS leads. Afterward, these visualizations can also help neurologists fine-tune the electrical patterns of DBS stimulation to have the greatest effect.

The SIS System hones in on one of two small regions located deep within the brain that are important for treating Parkinson’s: the subthalamic nuclei and the globus pallidus internus/externus. Its visualizations are built from a combination of high-definition 7 Tesla MRI scans and proprietary algorithms that adjust the target node location based on the unique anatomical information of the patient brain.

Placing a DBS lead is a delicate science. These tiny devices, which are barely larger than a grain of rice, may not be able to stimulate the target brain region if they end up just one or two millimeters away. Studies showed surgeons who used the SIS System could identify the target location for DBS nodes with about 70 percent greater accuracy than previous methods allowed.

Brad Swatfager, SIS president and CEO, said it was satisfying to see the technology find its first commercial use.

“This marks a significant milestone for SIS, as we have spent nine years building the most accurate visualization tool for the key targets used in DBS procedures for the treatment of Parkinson’s,” Swatfager said. “The improved accuracy of the visualized structure coupled with the ease of image use in the planning or programming should significantly improve the experience for physicians and patients.” 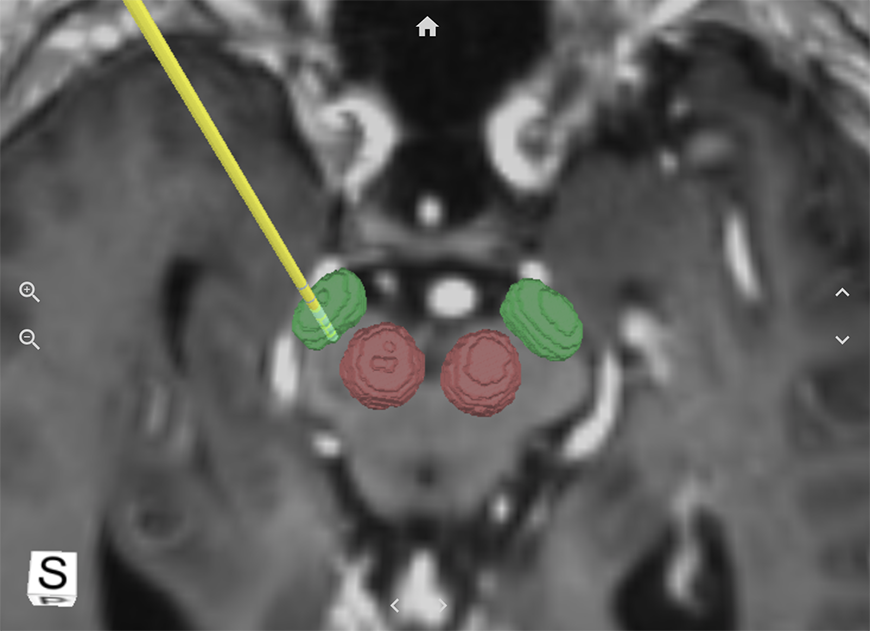 A 3D model provided by Surgical Information Sciences depicts the target placement for a deep brain stimulation lead, in this case in the brain's left subthalamic nucleus. Photo: SIS/Noam Harel

The research behind SIS started nearly 15 years ago. A neurosurgeon approached Harel in 2008 about using fMRI—a type of magnetic imaging that depicts brain activity over time—to help target DBS treatments for patients.

Harel was shocked to see how little detail a low-powered MRI of 1.5 Tesla could actually provide to surgeons. It was clear the effort called for a higher-powered magnet.

“I started to use the 7 Tesla MRI to visualize the target instead,” he said. “The first time I actually showed the neurosurgeon the images, it was like turning on a light in a dark room.”

The higher-definition scans produced a much more helpful view of the brain for the surgeon. Over the next few years, Harel and electrical and computer engineering researcher Guillermo Sapiro, PhD (now at Duke University), built on the concept, developing algorithms that would add to the MRI scans to further inform the electrode placement. SIS launched in 2013 to move their technology to market.

In the years since, Harel has continued to conduct research to improve and validate the SIS System’s accuracy. He has been scanning research participants and feeding the images into the deep learning algorithm that powers the technology. While Parkinson’s is the current focus of the SIS System, Harel said it could later be repurposed for other movement disorders, as well as for psychiatric targets treated through DBS, such as obsessive compulsive disorder.

Generally speaking, DBS therapies are underused right now, in part because of their inconsistent success. In some cases, surgeons need to adjust the location of the implanted electrodes after its initial placement to bring the patient any benefit.

Many Parkinson’s patients in Minnesota, however, are getting good results. Harel attributes this to the University’s combination of strong basic science in deep brain stimulation, its clinical applications, and its experts, some of whom are international leaders in their field. A crucial part of the equation is the Udall Center of Excellence for Parkinson’s Disease Research, a National Institutes of Health-funded center directed by Jerrold Vitek, PhD, MD, professor of neurology in the Medical School.

The SIS System is now in use in several clinical locations outside of the University, both in the Twin Cities and at locations on the East Coast. As the technology grows in use, Harel believes its improved accuracy for DBS treatments will be the key to allowing a much larger number of Parkinson’s patients to experience a higher quality of life.

“For every case, there are very good chances that the electrode actually gets to the right location and we can validate that,” he said. “This is really a game changer.”