It was 15 years ago, as he was committing to graduate school at the University of Minnesota, that Jimmy Randolph began his focus into geothermal energy—a line of exploration that would lead him to ultimately bring a new sustainable heating and cooling technology from theory to reality.

“It felt really important to me that my work, in math and physics, have real-world impacts in the environmental space,” he said. “It is very exciting to see this work start coming to fruition, and to look back and see the path that brought me to this point.”

Today, Randolph, PhD, is chief technology officer at Darcy Solutions, a Twin Cities-based company that aims to deliver geothermal heating and cooling in a more cost-effective and energy-efficient way than previous systems that is also more environmentally friendly than conventional heating and cooling systems. The startup launched in 2018 with support from UMN Technology Commercialization.

Randolph said he hopes Darcy’s systems will help to address the energy demand of heating and cooling buildings, which has been relatively ignored in the larger picture of greenhouse gas emissions compared to the more visible electricity generation and transportation sectors.

“We are heating our buildings in essentially the same way today as we did 100 years ago—by burning something,” he said. “My hope is that Darcy's technology both directly creates massive energy and emissions savings for building heating and cooling, and that it also inspires innovation and different ways of thinking within the larger HVAC space.”

Temperatures on Earth’s surface can vary pretty widely, especially in places like Minnesota, where over 100 degrees Fahrenheit can separate the dog days of summer and the deep freeze of winter. Very little such change occurs below ground, however, where it stays about 50 degrees year-round. Geothermal heating and cooling take advantage of the stable subterranean temperatures by “pulling” heat up from a depth of 50 to 250 feet when trying to warm a building and “pushing” heat down when a building needs to be cooled.

The heat itself moves via water in the system’s piping, which is pumped between the surface and tubing that’s buried in the ground. Geothermal installations typically include multiple setups like this, each using a hole bored into the ground in much the same way a water well is drilled. In these systems, however, the water in the pipes remains separate from the natural groundwater because the pipes are grouted or concreted in place, and the process neither consumes nor contaminates that groundwater. 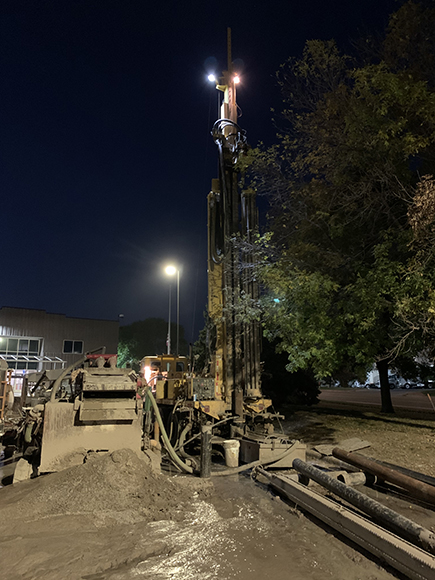 Geothermal systems are nothing new, said Darcy CEO Brian Larson. Short of opening a window, they are regarded as the most energy efficient and environmentally friendly method available for heating and cooling.

Two large hurdles have often confounded past geothermal projects, however. The first is the up-front expense, as systems can take 15 to 25 years to “pay back” their installation costs through the savings they provide in operation. The other is the amount of space the system requires. Each bore hole provides about one ton of cooling capacity (a standard industry measurement), but an average house needs about three tons of cooling capacity, a building of 20,000 square feet needs 50 tons, and a skyscraper could require 1,000. Drilling more bore holes requires that a larger area be torn up during installation and increases the installation cost.

Darcy’s technology amplifies what each bore hole can do, with its current model providing 20 tons per bore hole and future models on track to possibly double that. The company uses a heat exchanger to transfer heat with groundwater rather than sediment and rock, but without using any of that groundwater or risking its contamination in the process. That means the system requires fewer holes drilled to meet heating or cooling demand, reducing the surface-level space required by 95 percent. A smaller footprint allows existing buildings—not just new construction—to build in geothermal systems without extensive remodeling.

“That’s the biggest benefit that our approach provides: we get a much higher level of energy exchange per hole in the ground,” Larson said. “We end up seeing savings up front, and when it operates, we see additional savings in operating costs. As a result, our paybacks are five to seven years.”

While every building is different, Larson estimated that using the system to replace conventional heating and cooling cuts annual costs by about 60 percent, with a greater portion of the savings coming from cooling than heating because of the relatively low price of natural gas.

Since its launch, Darcy has received ample support. It participated in the first cohort of UMN Technology Commercialization’s Discovery Launchpad incubator, received assistance from the MIN-Corps program, and also  a grant from the state’s Launch Minnesota initiative.

Recently, MNSBIR helped Darcy garner funding for three projects through the federal Small Business Innovation Research (SBIR) and Small Business Technology Transfer (STTR) programs. One project will help Darcy hone the design for its heat exchanger, while another is a project to explore groundwater’s potential for storing heat/cold for later use, analogous to how a battery stores electricity. The third project will explore how the company’s geothermal design can integrate with water well systems in rural agricultural settings.

Meanwhile, Darcy is starting to install systems for customers. A project at Como Zoo and Conservatory will evaluate the feasibility of potentially replacing the decades-old steam boiler system to cut the St. Paul zoo’s carbon emissions and energy costs. Other large structures, like office buildings, are the most likely candidates to benefit from their own system, Larson said, but large groups of single-family houses could collectively tap into this type of energy by sharing connections to the same few bore holes.

“We’re really well poised to meet those requirements, and do it in a way that’s financially attractive,” he said. “The bonus of our technology is that not only can you comply, you can save money.”