USPTO Director: US Must Broaden Involvement in Innovation

US Patent and Trademark Office headquarters in Alexandria, Virginia. Photo: Alan Kotok, licensed under CC BY 2.0

For centuries, the intellectual property system in the United States has succeeded in accelerating the pace of innovation and the introduction of new ideas and technologies that improve our world—but when it comes to involving a broad and diverse segment of the US population, the system could use some work.

That was the message Andrei Iancu, director of the US Patent and Trademark Office and under secretary of commerce for intellectual property, conveyed last week when he spoke virtually at the University of Minnesota about expanding and building inclusivity in American innovation. The conversation was hosted by UMN Technology Commercialization for an audience of more than 275 students, researchers, and faculty, as well as entrepreneurs and inventors outside the University.

The democratization of invention in the US fueled an explosive growth of innovation over the past 200 years or so, Iancu said. Between the US Constitution’s intellectual property clause and the establishment of the modern patent and copyright systems, the country paved the way for anyone—not just those with wealth or status—to introduce new technologies into society.

While the intentions of this longstanding framework were to open intellectual property ecosystem to all, Iancu said that many groups are still largely left out of participation today.

“The fact is that to this day, innovation in the United States and intellectual property remain highly concentrated,” he said. “They are concentrated demographically, geographically, and economically.”

While the proportion of women inventors named on patents is at an all time high, for example, a recent USPTO study still found that women were named as inventors on only 13 percent of the US patent applications filed in 2019. Other studies show racial minorities have a participation number that’s lower than that, Iancu said, further emphasizing the need for fast progress toward a more balanced and inclusive innovation ecosystem.

Chris Cramer, PhD, the University’s vice president for research, said it’s important for universities to play their part in this progress. Equity, diversity, and inclusion efforts are a focus across the research enterprise, including in Technology Commercialization, which helps researchers apply for patents and bring their innovations beyond the lab, and the University’s Systemwide Strategic Plan, which sets the institution’s values, priorities, and goals for the upcoming years.

“We at research universities are blessed with international diversity, with scholars landing here from all over the world,” Cramer said. “But that doesn’t exempt us from the problems of systemic and institutional racism that are at the center of discussions across the United States.”

Improving the US intellectual property system is a constant work in progress, Iancu said, with the goal of creating a balanced and fair landscape for everyone involved. In addition to being more inclusive of groups currently underrepresented in innovation, the system also needs to ensure it works for all parties: for companies and for individual inventors, for industry and for academia, for patent owners and for those who use their patents.

Progress on these fronts won’t happen on its own, Iancu said.

“For our nation to make a real step forward and move the needle in a more meaningful way, we need to have a concentrated, focused national plan to expand American innovation,” he said. 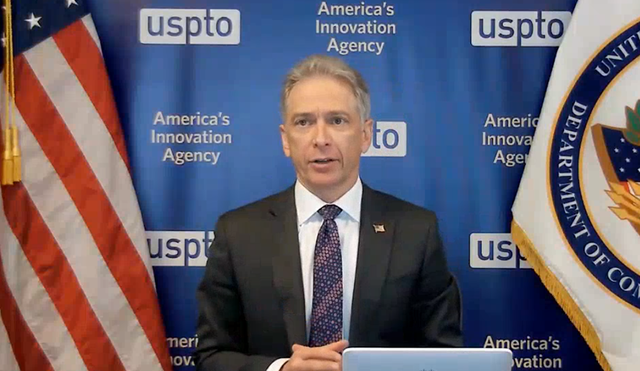 Andrei Iancu, director of the US Patent and Trademark Office and under secretary of commerce for intellectual property.

This plan comes in the form of USPTO’s National Council for Expanding American Innovation (NCEAI), launched in September to build a more diverse and inclusive innovation ecosystem. The council brings together leaders in corporate, academic, nonprofit, professional, and government organizations to look at the entire pipeline of innovation and find ways to solve the existing issues. As part of this work, NCEAI will talk to students, faculty, startups, and many other groups of people to gain perspective and understanding.

Apart from informing NCEAI’s work, academia is unique in this effort because it can play a big role in helping to address the current disparities, Iancu said. While many K-12 schools and universities readily emphasize education in the STEM (science, technology, engineering, and mathematics) fields, their standard curricula often focus less on the subjects of innovation, entrepreneurship, and intellectual property, even though these subjects have a strong connection to STEM fields. Iancu called for more education in this area.

“One of the bigger problems with innovation and the IP ecosystem is that it’s complicated, it’s complex,” he said. “I firmly believe that these issues need to be demystified early on.”

Universities specifically can also play a role in mentorship. Faculty and staff are guiding voices and role models who can help new entrepreneurs and inventors succeed in commercializing discoveries and creating startup companies, Iancu said. They can also help ensure researchers are thinking about intellectual property from the beginning of their projects and don’t miss the opportunity to protect an invention.

This last point—IP protection—is crucial, Iancu said. While universities are a fountain of creativity and innovation, they require the collaboration of a commercial entity with investors, employees, infrastructure, a marketing plan, a distribution plan, and more to ensure newly developed technologies can benefit society as intended. Intellectual property protection provides the stability needed for these collaborations to form and flourish.

“There is this perception in certain circles that IP can slow down innovation and commercialization, that IP perhaps can act as a barrier,” he said. “The economic reality of this is that it’s exactly the opposite. IP speeds up the rate of innovation in the first place and the transferring of that innovation that makes it available to the public.”

Watch a recording of the USPTO's Andrei Iancu speaking at the University of Minnesota-hosted event.