With more than one billion vehicles operating daily and millions of flights taking off annually, transportation is responsible for nearly one-third of the world’s greenhouse gas emissions and is a major contributor to global warming and climate change. While electric transportation can offset a fraction of toxic greenhouse emissions, batteries charging solely on clean electricity and environment-friendly battery recycling technology will take decades to mature. To cut down the greenhouse emissions and avoid climate disasters, we need sustainable and scalable technologies that can be deployed in the next few years to enable the clean-burning of fuels.

Sayan Biswas, PhD, the Benjamin Mayhugh Assistant Professor of Mechanical Engineering in the College of Science and Engineering at the University of Minnesota, is an experimental energy researcher who is deeply motivated by the fact that our current overreliance on fossil fuels results in an alarming one-way downslope.

“That dangerous trajectory could take us to the point of no return as we’re adding more greenhouse gases and the planet is warming up,” Biswas explained. “There is a simple solution to this problem – adopt technologies that produce fewer or zero greenhouse gases. The question is: how do we develop clean energy technologies that can scale up to match our current gigantic energy demand?”

That’s where plasma comes in. Plasma, the fourth state of matter after solids, liquids, and gases, is an ionized gas consisting of ions, electrons, and excited particles. One of Biswas’ solutions: an inexpensive low-temperature plasma igniter that can replace conventional spark plugs. While traditional spark plugs produce a high-temperature spark, a low-temperature plasma igniter deposits a smaller and more precise amount of energy for ignition. Moreover, plasma igniters can immediately be dropped into the existing engines. This roughly $10 addition to an engine could lead to hundreds of dollars in fuel savings while potentially producing zero emissions and leaving no carbon footprint.

OVPR is proud to recognize this forward-thinking, important work by granting Biswas the inaugural Innovation Impact Case Award, which highlights research that has had a significant impact outside of academia and made a meaningful difference in our communities. Included with this recognition is a $10,000 cash prize.

The fact that plasma could be a powerful ignition source has been known for a while. Low-temperature plasma discharges generate ozone, excited gas molecules, and ions, which can change fuel chemistry so that it can burn leaner and faster at a lower temperature resulting in nearly zero emissions and doubling the fuel economy.

It took a while for the plasma technology to become viable for use in engines. Twenty years ago, plasma generators were the size of a room. Now they’re the size of a lunchbox, making it practical to install them in a typical engine. Biswas collaborated with material scientists and electrical engineers from Sandia and Argonne National Laboratories to create a prototype plasma igniter. Because the original prototype cost $10,000, Biswas then worked with manufacturing experts to figure out ways to make the technology cost-effective.

Thanks to these collaborations and advancements in manufacturing and power electronics, Biswas and his colleagues were able to put a plasma igniter in an engine and demonstrate its efficacy.

“We measured the emissions and saw that nitrogen oxide emission, a significant contributor to greenhouse gases, is basically taken out of the picture because the engine is burning fuel at such a low temperature that it does not break nitrogen-nitrogen triple bonds, one of the strongest known chemical bonds.”

Through a series of lab-based engine experiments for a range of operating conditions, they found that plasma technology also dramatically improves fuel economy. An engine delivering 35 miles-per-gallon might achieve 60-70 miles-per-gallon with negligible pollutant emissions.

While the technology has been proven, Biswas and his team still need to know how durable it is before they begin installing plasma igniters in production engines. They are working with several engine manufacturers to conduct reliability and longevity testing of plasma igniters in their four and six-cylinder engines. If all goes well, Biswas envisions this technology could begin to be included in all gas engines that use an igniter. 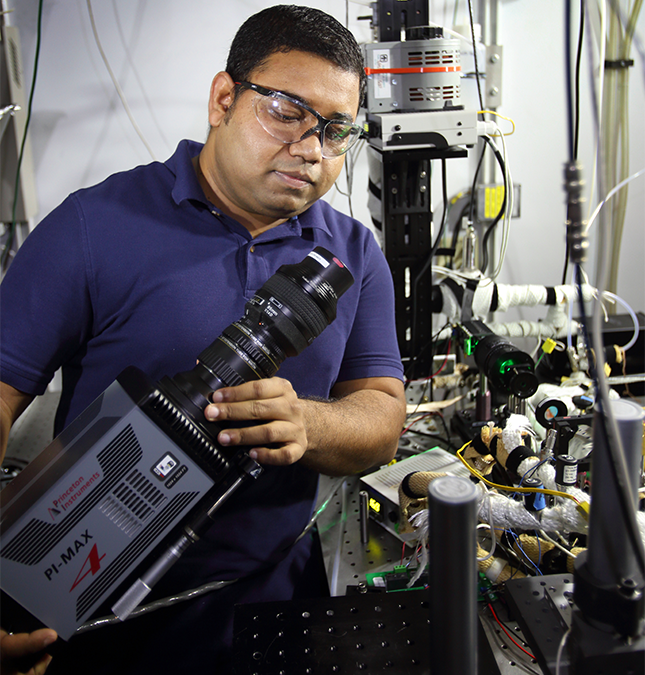 With a goal of cutting down greenhouse gas emissions by more than 30% before 2030 to achieve net-zero emissions by 2050, Biswas and his research team continue to investigate technologies that can make near-term energy production and utilization cleaner and more efficient. They are developing synthetic carbon-neutral and carbon-negative fuels to replace fossil fuels. They’re also exploring new research directions with plasma, such as plasma technologies in supersonic flights and plasma for renewable energy harvesting.

Biswas believes we can have a significant impact on climate change by making steady and sustained technological changes starting now.

“It’s like losing weight in that you have to do work every single day. You can’t just go to the gym once and run for 24 hours. You need a plan that includes healthy habits and a good diet. It’s painstaking, but if you do it consistently, it will get into your lifestyle. Similarly, every country, organization, and even every individual must have a climate action plan. We have to make small changes on a regular basis. We have to work together, and we must act now. I am motivated to give people technologies they can incorporate into their lifestyles. It is not too late to limit some of the worst effects of climate change.”

Originally from India, Sayan Biswas earned a PhD in aeronautics and astronautics from Purdue University then completed postdoctoral research at Sandia National Laboratories. An enthusiastic educator, he was looking for an opportunity in academia and came to Minnesota in 2020 because of the University’s reputation for quality thermal science and plasma research.