Housed in a modern facility at the Minnesota State Fair, the Driven to Discover (D2D) Research Facility allows researchers immediate access to hundreds of thousands of community members who can participate in dozens of research projects over the 12 days of the fair. Fun and innovative, these studies generally take less than 20 minutes while making a significant impact – researchers can get the results they need in a matter of hours or days rather than months or years and community members can see up-close how research works and why it matters.

“It puts a human face on the research process,” said Ellen Demerath, School of Public Health professor and co-director of D2D. “I think of it as moving the curtain aside so the public can see research up close and personal.”

Demerath has been involved with D2D since the beginning, when the idea to combine research with Minnesota’s most attended annual event was proposed by D2D co-director and Medical School professor Logan Spector. In 2012, the pair brought a single research study of the genetics of child growth to the fair and were astounded at the results. They were able to enroll and obtain saliva samples from 638 children over the course of 36 hours.

Since 2014, more than 113,000 individuals have participated in 285 studies stemming from 104 departments across 37 colleges and partners. As an estimated 20% of Minnesotans visit the fair annually, D2D is a strategic and effective way for researchers to interface with the public, allowing them to not only get the results they need but also engage in meaningful dialogue with and represent the University and the scientific process to people who might otherwise never talk to a scientist. Minnesotans also get to see firsthand the careful process of consenting to research participation that is overseen by the University’s Institutional Review Board. 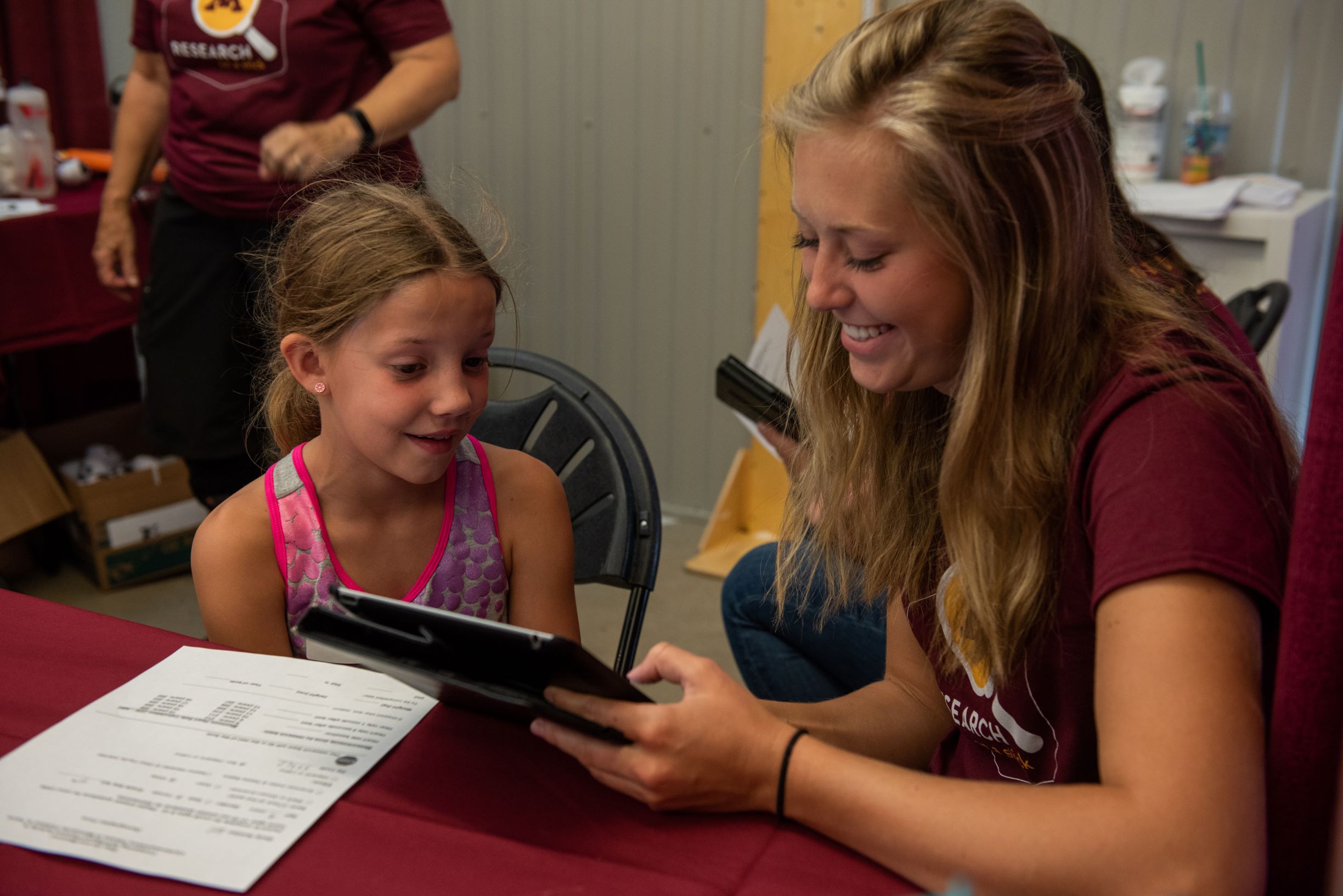 Researchers benefit through their conversations with the public as well as with researchers from other disciplines, which can lead to novel ideas or collaborations. D2D research projects have led to more than 100 peer-reviewed studies and been featured in more than 30 student dissertations, theses, and posters.

Despite all these benefits, D2D administrators have determined that 75% of research participants come from the Twin Cities metro area, skewing the results in favor of urban needs.

“We know that people in rural areas have a difficult time participating in research, and that there are important health disparities and economic issues impacting rural Minnesotans more than urban Minnesotans,” said Demerath. “As we’re a university for all of Minnesota, not only an urban research enterprise, there is a real pull to get out into greater Minnesota.” 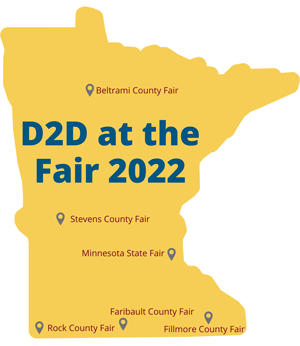 The solution? Bring D2D to county fairs. This year D2D will have had a presence at fairs in Fillmore, Rock, Faribault, Stevens, and Beltrami Counties. Researchers are bringing projects specific to rural residents, such as a study of chronic back pain specifically interested in Midwestern crop growers held at the Faribault County Fair the last weekend of July. Another popular research project at that same fair collected earwax for microbiome analyses – participants were able to watch live as researchers inserted a camera down their ear canals. One participant was so enthusiastic about the study that she volunteered her time recruiting more people into the D2D space.

This year’s county fair pilot study was made possible by a coalition of ten University units that each contributed $5,000, which covered the costs typically paid by researchers to reach potential participants. While the benefits of reaching the rural areas seem straightforward, Demerath isn’t sure if D2D will be able to return or expand to more county fairs in 2023. D2D will need to run the numbers to figure out the cost-effectiveness. At the State Fair, D2D researchers typically spend $3 to $5 per participant out of their own project budgets, a relatively low cost allowed by the high number of visitors. The State Fair facility receives approximately 8,000 visitors each day, which is more than half the population of rural Faribault County, one of the county fair pilot sites.

As far as rural fairs in 2023 go, Demerath says, “stay tuned,” but D2D will continue to return to the Minnesota State Fair each year. UMN researchers systemwide are invited to apply to participate in D2D. Demerath encourages researchers to develop interactive studies, citing the popularity of a study that had individuals over 60 doing a stairmaster routine to look at acute changes in the body as a result of exercise or another rehabilitation study that had participants move in the center of a eight-foot circle while cameras captured their individualized ways of moving. Demerath recently discussed some of the more interesting D2D projects on Info Booth Ladies, a podcast that highlights State Fair happenings.

Applications to participate in D2D at the 2023 State Fair are open from November through January, with study selection occurring in January and February. Applicants fill out a brief online application and submit a one to two page study description through the D2D website.