Kyle Shelton, PhD, to Lead Center for Transportation Studies at the University of Minnesota 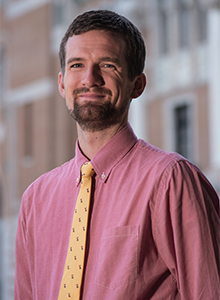 Kyle Shelton of the Kinder Institute for Urban Research at Rice University in Houston has been named the next director of the University of Minnesota Center for Transportation Studies (CTS).

Shelton currently serves as deputy director of the Kinder Institute, a multi-disciplinary think-and-do tank focused on translating academic research into on-the-ground improvements in urban communities. Shelton holds a PhD in American History from University of Texas at Austin.

Shelton will begin in the role August 2, 2021, taking over from Interim Director Dawn Hood, who took over when previous Director Laurie McGinnis retired in January after nearly a decade in that role. He will head a leading center that fosters innovation in transportation and involves more than 140 faculty and research staff from 30 University of Minnesota departments through its next stage of evolution and impact. CTS was established in 1987 to apply University of Minnesota thinking to solve real-world issues, and today CTS makes connections with and between national, state, and tribal transportation agencies, business organizations, elected officials, other universities, international partners, and University leaders.

Vice President for Research Christopher J. Cramer said that he and other interviewers were impressed by Shelton’s enthusiasm and vision, as well as his accomplishments as part of the leadership of a similarly multidisciplinary academic research institute in Houston, the nation’s fourth largest city.

“The feedback we received from Kyle’s public interviews emphasized the value of his national perspective and the connections that he will bring to our local and regional transportation challenges,” Cramer said. “At the same time, reviewers were impressed with his thoughtful plans to engage stakeholders in Minnesota — to ‘meet them where they live,’ here in a Midwestern metro area that is under a national spotlight on issues of equity and fairness, which are closely tied to transportation.”

“Dr. Shelton rose to the top of a very impressive pool of candidates for many reasons,” according to Dean Laura Bloomberg of the Humphrey School of Public Affairs, who chaired the search committee. “He is a collaborative leader with excellent research skills who views safe, sustainable, and effective transportation systems as a fundamental component of environmental justice and social equity.  Kyle joins a dedicated community of scholars and practitioners at CTS, and I'm confident he will lead the Center to ever greater national prominence as a catalyst for innovation in transportation research, education, and engagement.”

To help catalyze new CTS initiatives focusing on technological innovation, Cramer said his office will also provide new, interim funding for Shelton to hire a 25 percent time scholar who will have a mandate to drive increased and informed CTS activity in the science, engineering, and technology space.