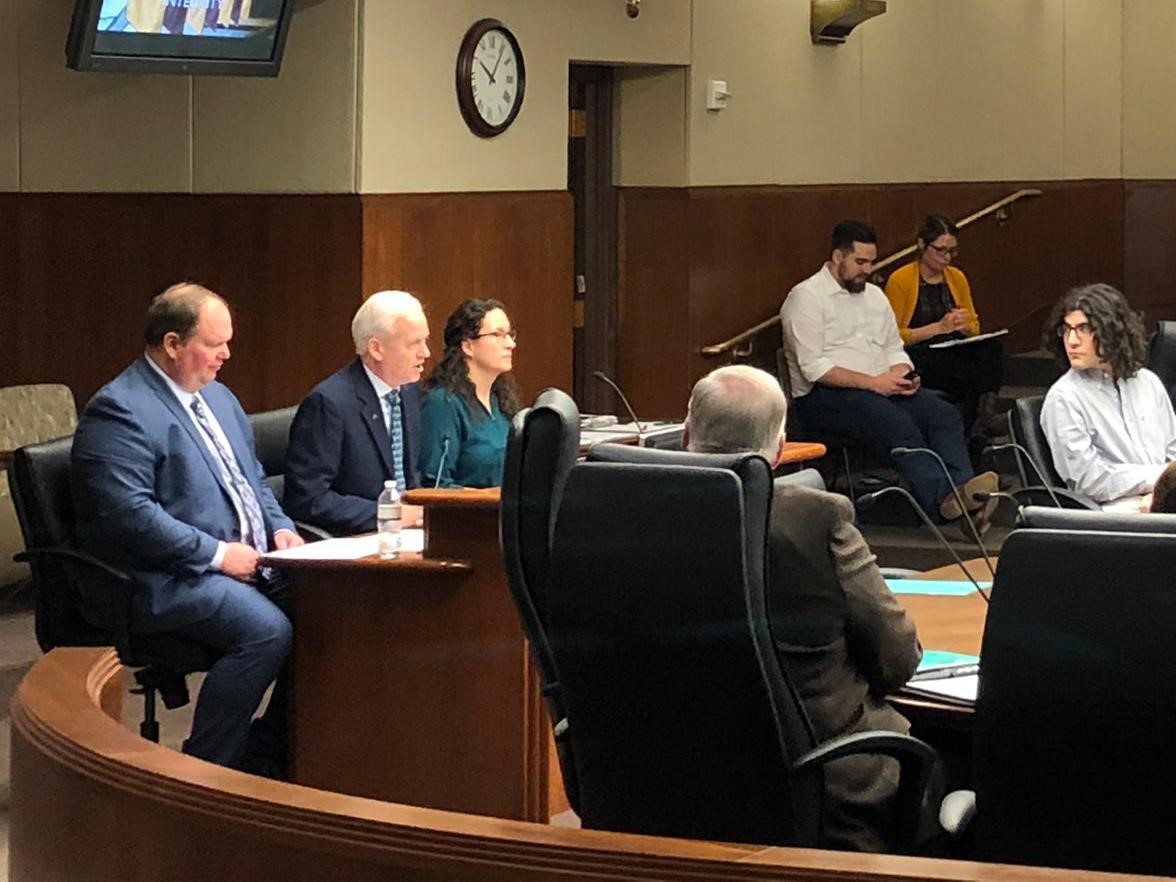 On January 24, 2020, Vice President for Research Chris Cramer overviewed the University of Minnesota’s work in research, teaching, engagement, and operations before a group of lawmakers interested in climate change issues.

“Climate is a priority of the University; climate change is real and affecting our state; it is affecting our university too--our students, our families,” Cramer said. “We welcome dialogue with the legislature and want to be a partner in solving these issues. You can—and should—ask us to do more.” 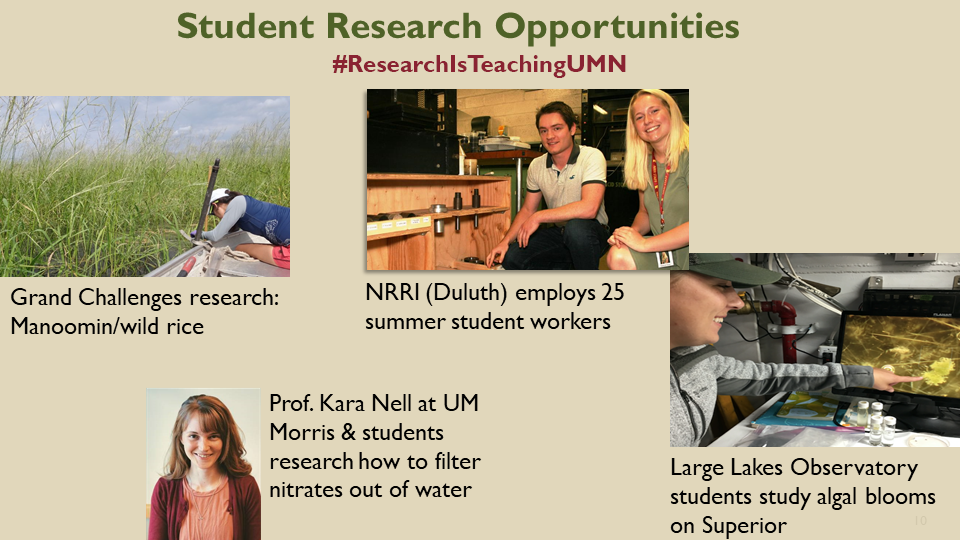 Cramer highlighted sustainability-related research opportunities for students across the University of Minnesota system.

Speaking before the Minnesota House Climate Action Caucus, Cramer emphasized the unique contribution the University makes as a research institution to both climate change mitigation and adaptation, as well as the unique opportunities that University students have to learn through working on research projects. Cramer called attention to his Twitter hashtag #ResearchIsTeachingUMN, and students working on algal blooms on Lake Superior through the Large Lakes Observatory in Duluth and research into the filtration of nitrates from water at University of Minnesota Morris, among several examples.

Cramer also outlined curricular enhancements that allow University students to be more directly engaged in climate change issues, including the creation of a sustainability minor and a new majors that include such as a sustainability minor and new environmentally oriented majors such as Bioproducts and Biosystems Engineering Sustainable Systems Management. He noted that US News & World Report named the Twin Cities campus a top ten campus for Ecology and Environment. 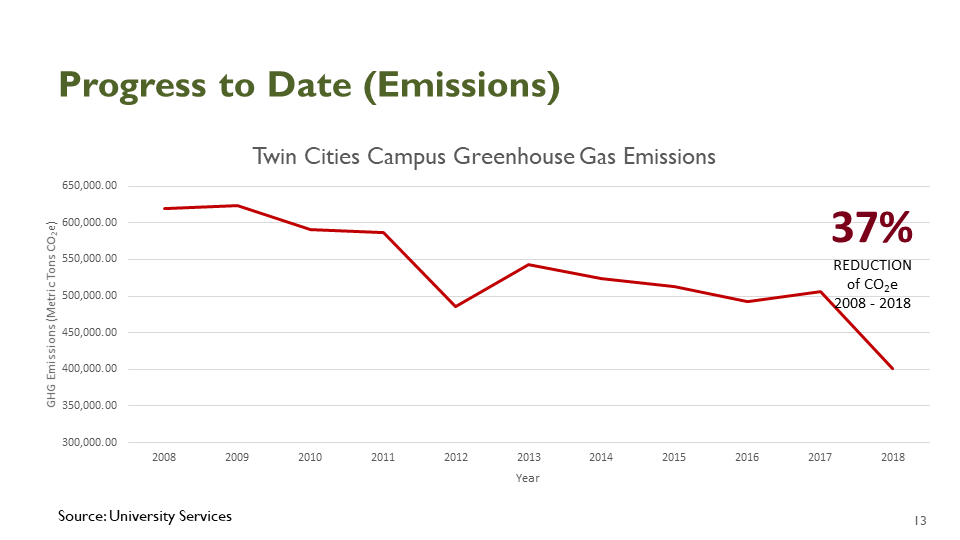 Cramer highlighted recent progress in lowering emissions at the University of Minnesota.

In operations, the University has made great strides in reducing emissions, Cramer told legislators, cutting emissions on the Twin Cities campus by 37% and across its system by 32% systemwide from 2008-2018, and has pledged to reach net zero emissions by 2050. The recent emissions reductions were the result of significant progress on energy efficiency (retrofitting lights with high efficiency LEDs, continuously commissioning buildings, installing controls and equipment to optimize building systems). The University has added an additional 2,000 Kilowatts of solar power arrays across the Twin Cities, Morris, and Duluth campuses in recent years, Cramer reported.

As the Legislature prepares to consider a capital investment budget, Cramer reminded lawmakers that state investment in University buildings and facilities is an investment in sustainability, because a large part of the University’s biennial capital request (link) is for refurbishing existing buildings and the University applies SB2030 standards (link), an energy conservation program designed to significantly reduce the energy and carbon in Minnesota buildings, to all its building projects. 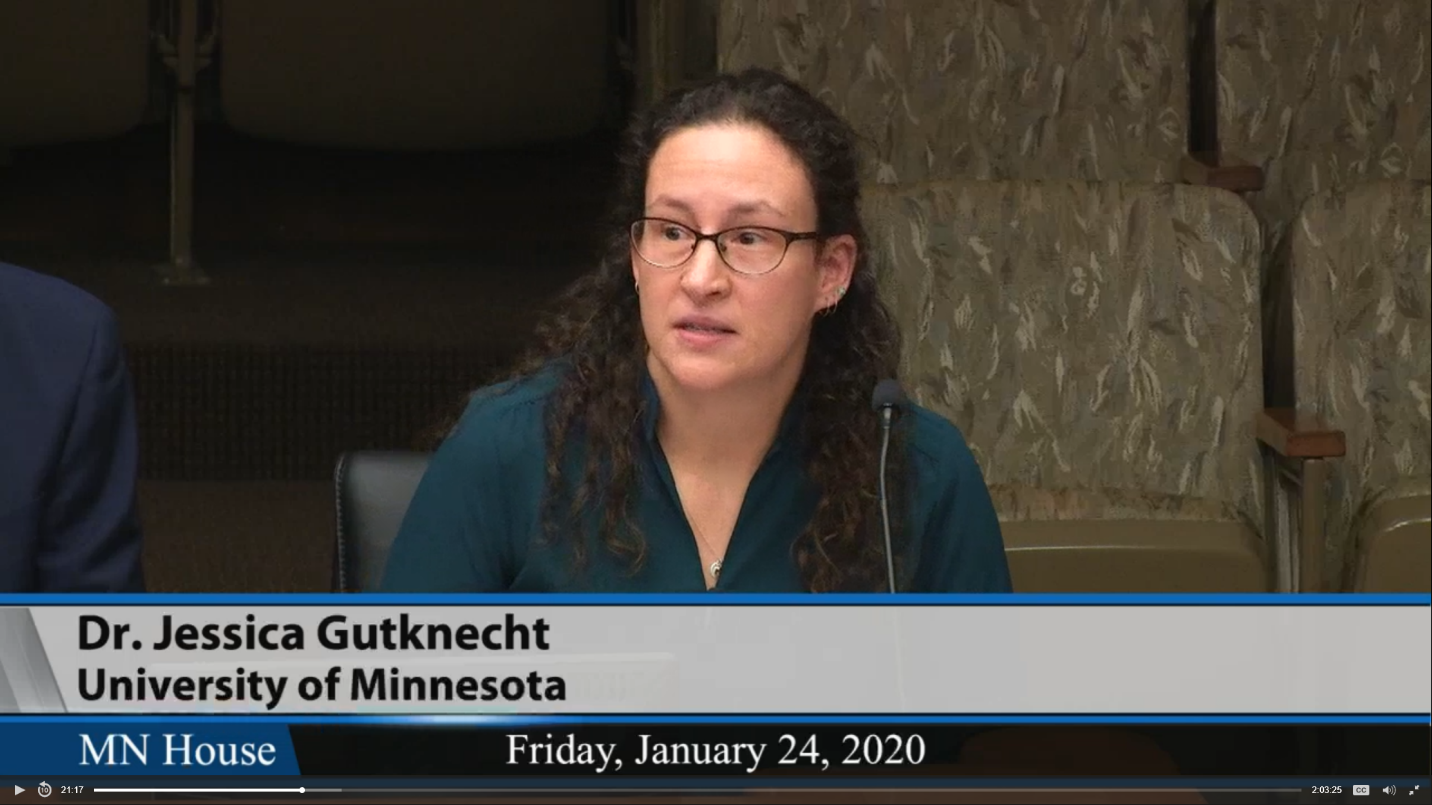 Cramer was followed by Assoc. Prof. Jessica Gutknecht (CFANS Soil, Water, and Climate), who spoke about the prospect for reducing inputs and storing carbon through cover crops and planting perennial grains such as Kernza. “We need to make it easier to implement strategies that make it easier to store carbon,” she said. “We need to incentivize and remove risk for farmers to experiment with new methods and new potential strategies and we need more support for researcher-practitioner cocreation of research, so we can work with farmers out on the land.” 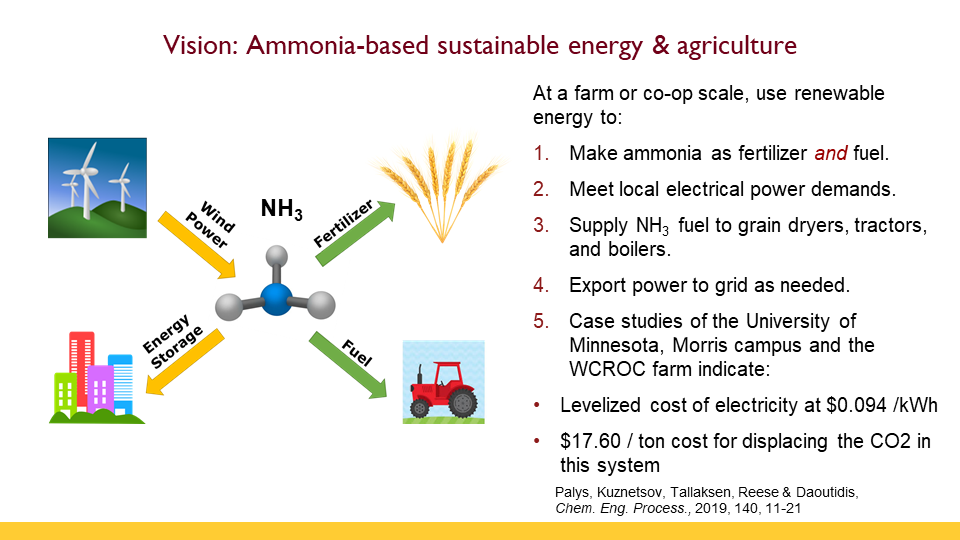 Michael Reese, Renewable Energy Director of the University’s West Central Research and Outreach Center in Morris, spoke next on experimental wind-to-ammonia technology that researchers are developing at the center. If the technology is fully implemented, Reese estimated that over 90 percent of the fossil fuel energy used in corn production could be replaced by low-carbon anhydrous ammonia produced by using wind energy. “In simple terms, we are putting wind energy in a bottle,” he said.

A recording of the hearing is available to view. Cramer is the first presenter after introductions.