In 2012, as a Marine special operations officer on patrol in Afghanistan, Derek Herrera was shot in a firefight and paralyzed from the chest down. While the injury prompted months spent on recovery and rehabilitation, it also gave Herrera the drive to dedicate himself to helping others who have endured spinal cord injuries or who have limited mobility.

Today, Herrera is the CEO of Habit Camera, a California-based startup company bringing to market a low-cost, wireless camera device that helps people routinely inspect hard-to-see areas of their own skin. The bendable device, developed through the Minneapolis Adaptive Design & Engineering (MADE) Program at the Minneapolis VA, allows users to see a live video feed from the camera on their smartphone or tablet and to capture photos to show caregivers or medical professionals.

Regularly monitoring the skin is a crucial practice for those with neurological injuries, circulation issues, limited mobility, and skin abnormalities, Herrera said.

“What we’ve created is the most effective, low-cost, simple way to digitally inspect hard-to-see areas of your body,” he said. “The best thing you can do to prevent wounds is to intervene early, and the best method they teach patients to do that is through regular skin inspections.”

The technology behind Habit Camera was developed by researchers and engineers from the Minneapolis VA and University of Minnesota, including: Gary Goldish, MD, principal investigator and cofounder of MADE and assistant professor in the UMN Medical School Department of Rehabilitation Medicine; Christine Olney, PhD, RN, principal investigator with MADE and nurse scientist with the Minneapolis VA Health Care System; and Andrew Hansen, PhD, director and cofounder of MADE, research biomedical engineer in extended care and rehabilitation with the Minneapolis VA Health Care System, and professor in the UMN Departments of Rehabilitation Medicine and Biomedical Engineering.

A patient might use the Habit Camera to check on any areas of the body where skin abnormalities might develop, such as the foot (e.g. a diabetic foot) or buttocks (e.g. if they have a spinal cord injury) or the back (e.g. for skin lesions). While these problems often start out looking innocuous, appearing like a blister or a callous, they can grow to cause patients pain, a loss of productivity, infections, amputations, and in some cases life-threatening complications. Meanwhile, conditions that reach an advanced stage without treatment can carry a high cost of care for the VA and other health systems.

“Given all these costs of taking care of wounds, both to the patient and to the system, we believe in and advocate for prevention,” Goldish said. “If we can stop them from getting serious wounds before they face all these costly consequences, that’s far preferred.”

The device is not meant to replace visits to the doctor or a medical diagnosis. Instead, it empowers patients to play a more active role in monitoring their own health. Having a better view of possible skin issues, Olney said, could help veterans decide whether it’s time to visit a doctor—which can be a big decision in itself for veterans, especially those with spinal cord injuries in more rural areas.

“If we tell veterans we want them to come into the clinic, we might be asking them to drive four hours—that’s a big deal, especially for a person with a spinal cord injury,” she said. “A picture sent to the provider asking, ‘should I really come in today’ could avoid unnecessary trips.”

The technology behind Habit Camera is over a decade in the making. Goldish, who spent years working with patients of spinal cord injury, found that many were unable to regularly inspect their skin using the mechanism they were provided: a mirror on a bendable stick. Limited neck mobility, poor eyesight, and other complications made the device burdensome or impossible for some to use.

In 2010, he started exploring the idea of replacing the mirror with a digital camera.

“The first time I tried it, I had the concept, but didn’t have the technology,” Goldish said, noting the photos the webcam he used took were blurry and provided too little detail. “It kind of just kept evolving over the years, until it was finally close to finished project.”

Along the way, the research team introduced improvements, testing different types of lenses to ensure the camera could handle both close-ups and farther away, big-picture views. Veterans who tested it were able to see significantly more of their skin in greater detail.

“‘I have never seen this part of my body,’” Olney recalled veterans saying. “That was really, really powerful and very exciting.” 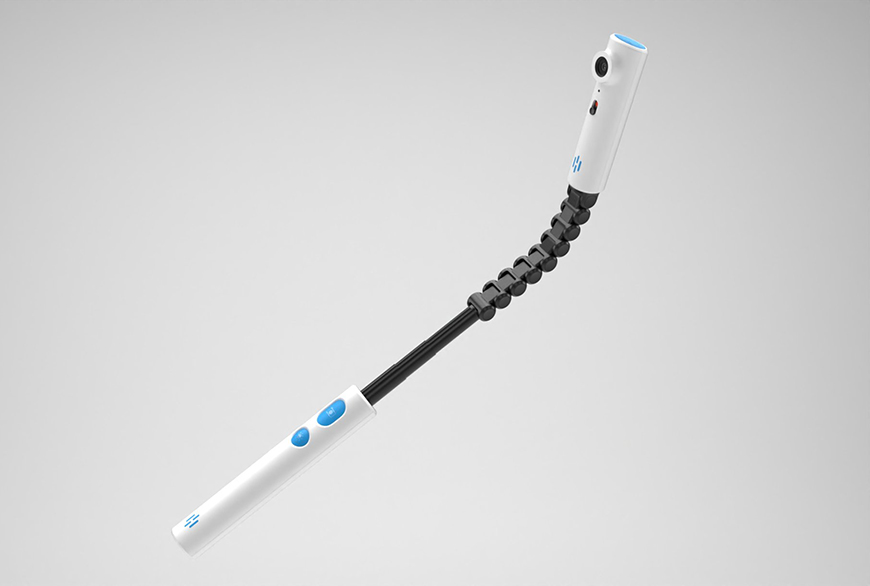 The Habit Camera device has a telescoping and bendable handle to allow users to get a better view on hard-to-see areas of their skin. Photo: Habit Camera.

While Habit Camera licensed the skin inspection technology to begin developing it for the market about a year ago, Herrera continues to work with the researchers to refine and optimize the device. Clinical research is underway at the VA to demonstrate both that the device is effective in allowing patients with spinal cord injuries and diabetes to monitor their skin and that they are willing and able to use it.

“We sent the device out to them and gathered data about the usability, about what their thoughts are,” Olney said. “We have pushed that data back to Derek so he can make changes to the system.”

While Herrera plans to eventually explore new applications of the Habit Camera technology, his focus right now is on getting the skin inspection device out onto the market, where it can start to help veterans and others with relevant medical conditions monitor their own health. His company is now taking pre-orders, with the first devices scheduled to ship later this summer.

As he prepares for what comes next, Herrera is receiving one-on-one coaching from advisers with the University’s Discovery Launchpad. He already has firsthand experience as an entrepreneur from a previous company he founded and brought through startup accelerator programs, but the incubator program is helping him build upon his existing knowledge to explore how best to bring his product to market.

“I wanted to sign up for it and take advantage of the mentorship because I knew I could benefit from it, and I could learn from people who have done this more than I have,” Herrera said. “The Discovery Launchpad team and the process has been phenomenal.”

More Innovations from VA MADE

Habit Camera is one of several innovations developed in the past few years by MADE researchers to help veterans who are undergoing physical rehabilitation or who have physical disabilities.

Another recent project, an exercise device that limits the harmful side effects of bedrest, is now reaching clinics. The Multi-Purpose Arm Cycle Ergometer, or “MPACE” for short, is designed to help patients progress more rapidly to the stage of functional rehabilitation that aims to reduce deconditioning during bedrest, shorten hospital stays, and lower the costs related to care.

The MPACE was licensed to Action Manufacturing, a Marshall, MN, company that is now producing and selling the system.