Seeking out answers to research questions often requires an intermediary step. Researchers must sometimes isolate a particular antibody, create a cell line, or develop an animal model with certain traits to move forward with their work.

Experts at University of Minnesota Technology Commercialization recognize that the usefulness of these and other tools—often the products of ample time and effort in the lab—doesn’t have to stop when the research project that conceived them comes to an end. The office’s Research Tools program preserves and shares these valuable assets by matching them up with companies that can use them in their work as well as vendors will distribute them to researchers in both academic and industry settings.

Naomi Walsh, PhD, technology licensing officer and Research Tools manager, said the program was designed to offer a slightly different pathway to commercialization. Instead of dealing with full-fledged inventions—what could be considered the “end results” of research—the program focuses on the resources created along the way.

While many of these tools are based in the life sciences, there are also plenty of examples relevant to other disciplines, such as algorithms, simulations, surveys, and smartphone apps. What all of these tools share is that they were developed in service of answering questions in one line of research and now hold potential to help answer others. The commercialization process for them, Walsh said, is consequently a bit different from other technologies. 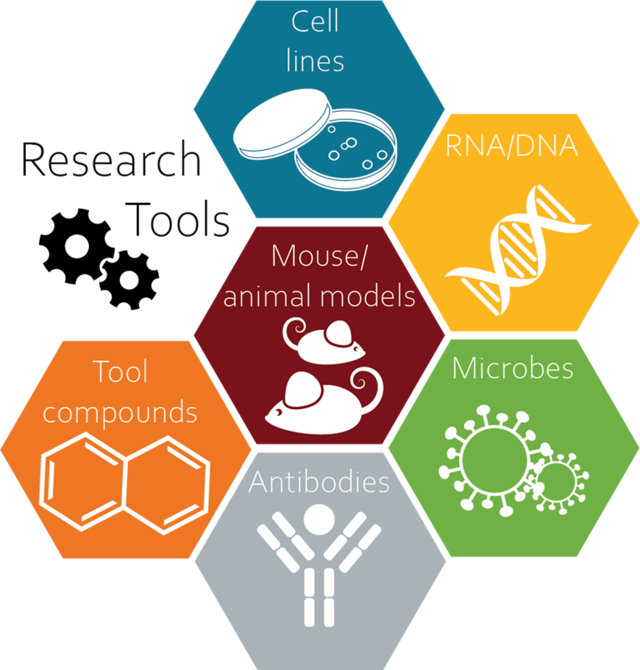 Examples of Research Tools related to the life sciences.

“Research tools are unique in that they often don’t require patents for protection,” she said. “It can take years to create a really nice, well-validated research tool, so another research lab or company would much rather come to you and purchase it than try to recreate it themselves.”

Distributing a research tool yields numerous benefits for University researchers. First, it saves time, as those outside the University who are looking to obtain the tool can now request it from a vendor, rather than contacting the researcher’s lab. Vendor distribution also helps to preserve the tool and increases the number of investigators in the broader research community who discover it and use it. Researchers are likely to see a greater impact (and more citations) from their tool as others adopt it and use it to spur progress toward new discoveries. Finally, researchers receive a portion of the royalties from selling the tool, which can help fund future research endeavors.

Jaime Modiano, VMD, PhD, Perlman Professor of oncology and comparative medicine in the College of Veterinary Medicine, has isolated hundreds of canine cancer cells in the course of his work. His samples have been purchased by numerous companies who will, for example, use them to test how the cells responds to a new therapeutic without going through the work of characterizing and isolating the cells themselves.

Walsh set out to launch the Research Tools program in summer 2019, when she was a Technology Commercialization Life Science Fellow. The role involved researching and writing marketing summaries for new technologies coming through the office, as well as identifying industry contacts who might license them. She had the opportunity to jump into meetings with technology portfolio managers and learn from the types of questions they asked about new technologies. She also sat in on conversations with industry and watched negotiations play out over licensing deals.

She credits the experience for bringing her a new perspective on scientific research.

“I had previously thought about science the way we do in academia, in this very detailed and mechanistic way,” she said. “Working as a fellow, the way I approached science changed. I started to consider it much more from an application standpoint.”

As part of the fellow role, Walsh was given several options for a larger project to lead. She latched onto the idea of developing the Research Tools program because such tools had been part and parcel of her own academic research. Her doctoral and post-doctoral work focused on fungal pathogens and antifungal drug development.

Today, with the program up and running, Walsh is pleased to see growing interest among the research community in distributing tools to a broader audience. She encourages principal investigators who believe they may have such a tool to reach out to her at Technology Commercialization. Even tools that are only relevant to a small corner of a broader field are fair game, as vendors can often still accommodate distribution to niche audiences.

Participating in the Research Tools program can be a great way for researchers who have never worked with Technology Commercialization to connect with the team and become familiar with the tech transfer process.

“This is a nice, ‘softer’ entry into the world of tech commercialization,” she said. “You can get a flavor for what all of this looks like and how we move things out into industry.”