University researchers are constantly pushing the limits of knowledge in their fields, making discoveries that stand to change how people think and the way they live. For research to inform the decisions people make, however, they must first be able to understand it.

Earlier this month, the University of Minnesota hosted the latest conference in a series designed to help scientists more effectively share their knowledge and research with audiences outside of academia. “Speaking Science: Communicating with Media, Funders, Policymakers, and the Public” brought together faculty, postdoctoral researchers, and graduate students interested in honing their communications and storytelling skills.

The one-day event, hosted by a collection of colleges and units from across the University, featured interactive training exercises, breakout sessions, and a keynote presentation by award-winning scientist Hope Jahren, PhD, who detailed her paleobiology career to date in the national bestselling memoir Lab Girl.

While it’s tempting to think that data alone will change the way people think and behave, often it takes a little bit more—the audience needs to care.

In “The Science of What Makes People Care,” University of Florida Center for Public Interest Communications experts Ellen Nodine and Matt Sheehan distilled principles from behavioral, cognitive, and social science into six guidelines that scientists can use to help get people to care about their work and what it means.

Among these principles was shaping the communications approach to fit the audience scientists aim to reach. By understanding the values and identity of these individuals or groups of people, Sheehan said, scientists can approach them from a familiar standpoint and better connect and communicate with them. This step can help avoid “solution aversion,” where people dismiss an idea because it goes against their worldview or makes them uncomfortable.

“Effective communication is no longer about just pushing your message,” Sheehan said. “We need to find where our values intersect.”

Another important lesson was to “talk in pictures.” This includes employing actual photographs and visuals, but also written and spoken language that helps the audience picture an environment or an action in their mind. Nodine and Sheehan suggest painting a more vibrant picture using imagery like “sit down together at a table” and “join hands” to deliver a more memorable point to the audience than by speaking in abstraction.

“We remember material far better when it’s expressed in concrete language that allows people to make more visual images,” Nodine said. “What kinds of images and metaphors can you use to help people understand and connect with your ideas?”

When it comes to the message itself, cut back on field-specific jargon and instead define just the key terms and concepts the audience needs to know. Think also about what you want the audience to take away from your message. Is there a call to action? If so, give them a specific action relevant to their lives that they can take, and then show how their participation will support a larger goal.

Finally, remember to tell stories. Think about how exposition, characters, conflict, and resolution can help connect people to the meaning behind the facts and data.

“Our societies are built on the stories that we tell ourselves,” Sheehan said. “We are uniquely wired to respond to stories, not to facts.” 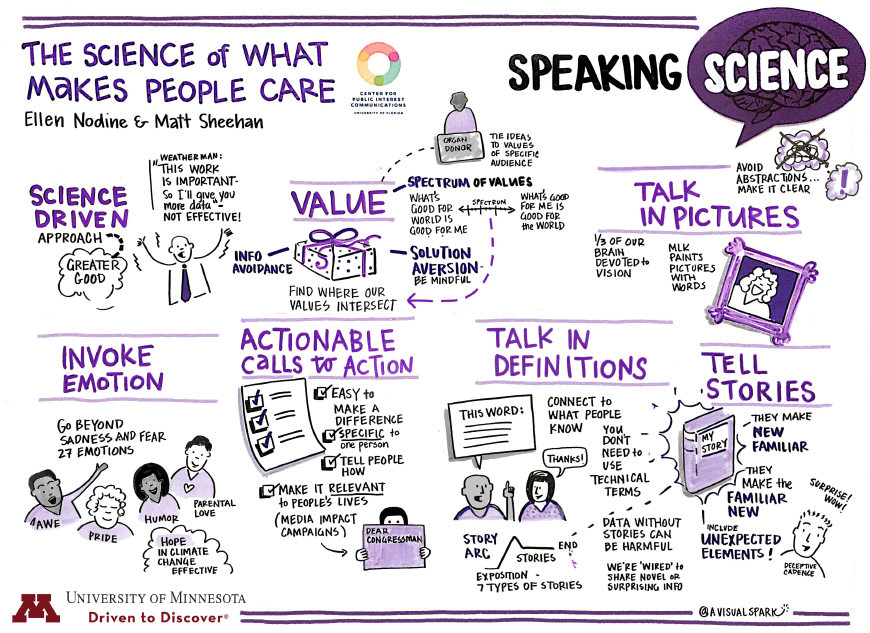 The Art of a Likable Science Talk

When it comes time to present your research, will people stay tuned in? Will they like it? As Hope Jahren told attendees during her keynote presentation, these questions matter.

“A good talk can make or break a career,” said Jahren, who got her bachelor’s degree at UMN Twin Cities and is currently a professor at Norway’s University of Oslo. “This is our oral tradition. It is the talks that we give, not the papers we write, that really let us share who we are and what we do.”

To discover how to give a scientific talk that people will like, Jahren and her team studied the composition of dozens of scientific talks, recording data about the length of the presentation, what worked well, and what didn’t. While the concept of “liking” something is inherently subjective, several researchers evaluated each talk to ensure no individual bias swayed the numbers. The team also tallied the types of slides used to gain a clearer picture as to exactly how presenters were conveying their information: text, photos, maps, graphs, tables, equations, or videos.

What Jahren and her team found was that there’s no clear “recipe” for how many of each type of slide presenters should use to achieve a likable talk. Some excellent talks were heavy on photos, while others used lots of graphs. There was, however, a consistent length for good presentations—one that has become a “contract” of sorts between the speaker and the audience—which averages to three quarters of an hour long, with about 33 slides total and just over one minute spent on each slide.

Jahren’s study also found that people generally want to like a scientific talk when they hear one, giving the presenter the benefit of the doubt, though she noted that this could vary based on the culture, the specific academic discipline, or the particular individuals in the audience.

At the end of a scientific talk, Jahren said it’s important to remember to thank the audience for choosing to spend their time listening to and discussing scientific ideas.

“We should all feel good about what we just accomplished,” she said. “We learned and we shared and we came together as people who are all interested in the same thing. And that in itself is a wonderful, wonderful way to spend the day.” 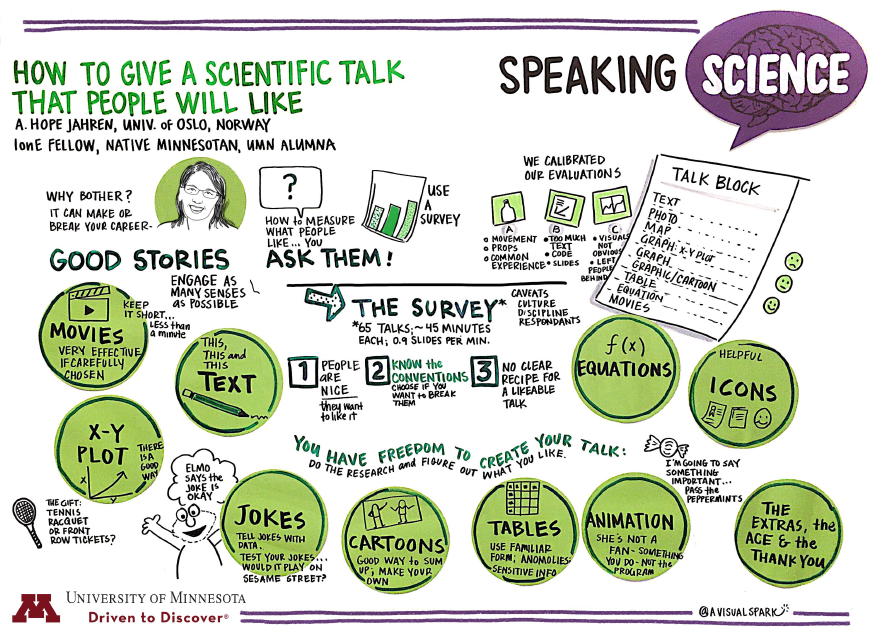 Want more pointers on speaking about science with a general audience? Check out these five tips from the conference’s inaugural year, and eight more from its second year.